The NOSAMS facility provides proven designs for sample-preparation systems and our staff have trained many students, technicians and investigators to use them. In some cases we work with investigators to evolve procedures tailored to their needs. However, because of limitations imposed by working space, we sometimes have limited ability to welcome outside investigators into our laboratories.

Visitors have used the facility's chromatographic systems to prepare samples for compound-specific analyses. Those with large numbers of samples can be offered favorable rates and arrangements for preparing their own samples at NOSAMS.

Dr. Li Xu, a specialist skilled in the preparative separation of organic compounds, shown here operating the two-dimensional PCGC in 2004.

With the advent of AMS, and the additional efforts at NOSAMS to greatly reduce sample size requirements, PCGC technology has allowed the development of compound-specific radiocarbon analysis (CSRA). This technique in which natural-abundance levels of 14C are determined in specific organic compounds was developed by Dr. Timothy Eglinton and his coworkers at WHOI. The PCGC allows recognition and resolution of sources of compounds, providing information about processes within the biogeochemical cycle of carbon and about paleoenvironmental conditions that was unavailable using previous techniques.

A multi-dimensional PCGC system was installed at NOSAMS in December 1998. This more precise comprehensive two-dimensional gas chromatography is capable of separating one order of magnitude more compounds than the traditional gas chromatography method. The system consists of two HP6890 gas chromatographs (GC) in series with a Gerstel preparative fraction collector attached at the end. Sample extracts containing suites of very similar molecules, e.g., a homologous series of n-alkanes, are injected repeatedly onto a high-capacity megabore capillary column in the first GC to separate and resolve individual molecules. In instances where separations are difficult to effect with one GC, targeted compounds or regions of the chromatogram are isolated and re-injected into the second GC. Finally, up to six specified peaks are isolated in the preparative fraction collector. Even with the power of capillary GC resolution and the high capacity of megabore columns, it is still difficult to collect enough sample for a radiocarbon measurement. Typical runs for up to a week often yield only 20-100 µg C samples. This system provides NOSAMS with a unique and powerful means of isolating and measuring the radiocarbon content of individual organic compounds isolated from complex natural matrices, e.g., sediments and soils. The ability to repeatedly inject sample extracts, collect target compounds, and analyze microgram-sized samples has made compound-specific radiocarbon analyses a reality. The addition of a second GC further improves the resolution, and therefore, the power of the technique. 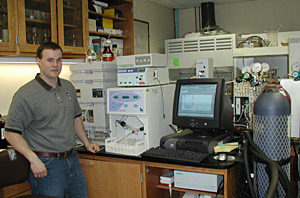 Sean Sylva prepares to use the High Peformance Liquid Chromatograph (HPLC) to determine which organic compounds from an Archaea bacteria sample (collected at a Lost City hydrothermal vent) can be isolated and analyzed for 14C. 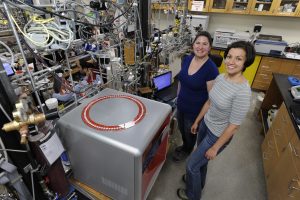 To improve processing of samples for total organic carbon (TOC) 14C analysis, we built an automated system for the collection of CO2 gas generated by the combustion of organic carbon samples. It is based on a commercial Costech 4010 elemental analyzer and in many cases takes the place of our standard closed-tube combustion technique. CO2 produced during sample combustion in the elemental analyzer is separated from the carrier gas and cryogenically trapped. The gas (sample size approximately 500 µg C yield) is transferred cryogenically to a calibrated volume in vacuum, quantified, and stored in a modular gas collection manifold. These manifolds are removed and re-connected to the automated graphite reactor vacuum systems.  There is also a Elementar vario EL cube connected to a manual vacuum line. 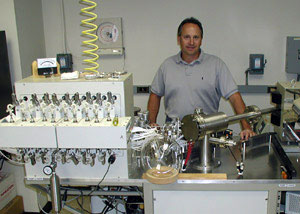 The VG Optima is the primary IRMS used for analyzing δ13C on a split of CO2 in-line as a sample is sent through the vacuum system to a reactor for reduction to graphite.

The Elementar precisION IRMS is interfaced with an Elementar vario ISOTOPE select elemental analyzer (EA). The EA-IRMS is used for analyzing δ13C on sub-samples of organic carbon samples taken prior to combustion. 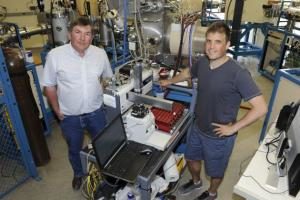 The Gilson Gas Bench system, an on-line gas preparation and introduction system, is coupled with CFAMS' gas ion source and is currently used for reconnaissance radiocarbon analyses of carbonate samples. 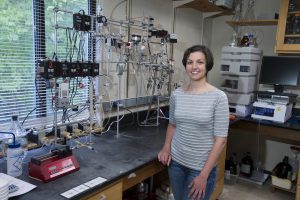 We have developed a new system to efficiently extract dissolved inorganic carbon (DIC) from seawater and groundwater samples. REDICS uses a gas-permeable polymer membrane contractor to extract the DIC from an acidified water sample in the form of carbon dioxide (CO2), introduce it to a helium gas stream, cryogenically isolate it, and store it for stable and radiocarbon isotope analysis. The system offers fast DIC extraction, streamlined analysis, and minimized set-up and prep time. It has been tested and validated by analyzing a series of sodium carbonate, seawater, and groundwater standards as well as a water column profile from the Sargasso Sea. The stable and radiocarbon isotope results demonstrate great system precision and accuracy (Gospodinova et al., 2016). Presently, the system has been upgraded and expanded to allow for the automated processing of 10 water samples.

The Ramped Pyrolysis and oxidation system is a custom built system that heats samples at a constant rate (usually 5 deg C/min) from room temperature to 1000 deg C.  The evolved carbon dioxide is collected from different temperature ranges or fractions.  This method seeks to decompose organic material into a spectrum of thermal reactivity and attendant radiocarbon contents, unraveling contributions from different pools of carbon. It has been applied to Antarctic sediment chronologies, age distributions in sediments and soils, the age spectrum of dissolved organic carbon, and atmospheric particulate matter.