Two internships are awarded each year to U.S. based graduate students for research at the NOSAMS radiocarbon facility at the Woods Hole Oceanographic Institution. The internships should involve innovative application of radiocarbon measurements to an important oceanographic research problem and/or development of new techniques for radiocarbon measurement and will provide 2 to 6 weeks at NOSAMS. Available funds will cover all analytical costs (for a modest number of analyses), round-trip travel, accommodation, and subsistence while in Woods Hole, but not field work and sampling.

Candidates should submit a two-page proposal outlining the proposed work and motivation and we will begin reviewing submissions starting June 1, 2022. Proposals and CVs (both as pdf files) should be sent to nosamsinternship@whoi.edu along with contact information. Proposals will be judged based on scientific soundness, relevance to capabilities and objectives at NOSAMS, novelty, and potential scientific impact. Priority will be given to collaborative research with PI's at NOSAMS, and that show promise for follow-on projects. Internships can be used at a mutually agreed time between September 1, 2022 and August 31, 2023. 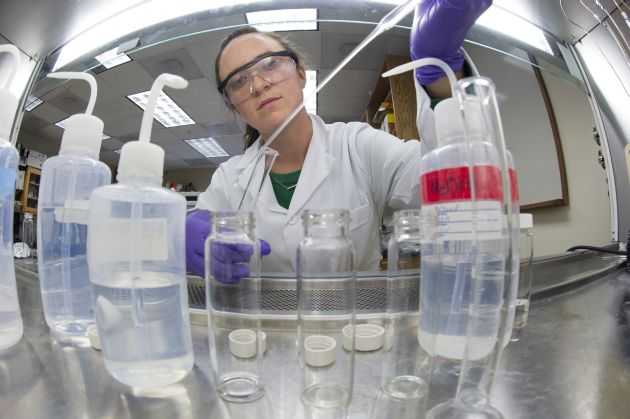 Reed Goodman (University of Pennsylvania) used Ramped PyrOX (RPO) to study the stable and radiocarbon composition of a geoarchaeological core from southern Iraq to better understand the depositional and ecological history of the Mesopotamian delta.

Ryan Venturelli (University of South Florida) used radiocarbon in sediment and water samples collected from a subglacial lake in Antarctica to investigate subglacial carbon cycling and the role of marine organic carbon in the subglacial microbial ecosystem.

Jenny Bowen (University of Michigan) studied the radiocarbon age of carbon dioxide produced during the oxidation of permafrost organic carbon by sunlight.

Gen Li (University of Southern California) used ramped oxidation and radiocarbon analysis to characterize the compositions and properties of organic carbon carried by river sediments, which were sampled from areas covering a wide range of climatic and tectonic conditions.
Kelsey Rogers (Florida State University) used ramped oxidation of oiled sediments to explore the evolution of oil deposited on the sea floor after the Deepwater Horizon Blowout of 2010.

Craig Connolly (University of Texas-Austin) used the radiocarbon content of groundwater dissolved organic carbon (DO14C) and soil near the Alaskan Beaufort Sea coast. He examined groundwater runoff as a source of DOC to the Beaufort Sea and its potential to increase as permafrost thaws.

Devon Firesinger (University of South Florida) used the Gas Ion Source to date foraminifera from a sediment core utilizing a Bayesian accumulation model. He investigated whether many dates at lower precision lead to a more comprehensive age model than that produced through traditional radiocarbon dating.

As part of Elizabeth Williams' study of the transport of terrestrial carbon to the marine environment, Elizabeth extracted and determined the radiocarbon content of lignin from differentially treated terrestrial and marine sediment.

Mara Dougherty isolated biomarkers for sulfate reducing bacteria isolated from Beaufort Sea sediments and measured their radiocarbon content.  She will use the results to shed light on the anaerobic oxidation of CH4.

Ian Ball (Scripps Inst. of Oceanography) analyzed lignin phenols standards to test a method he is developing to study the radiocarbon content of lignin in oceanic DOC.

Haiwei Shen (GSO, University of Rhode Island) developed a method to isolate and measure the radiocarbon content of formaldehyde collected from ambient air.

Andrew Wozniak (Virginia Institute of Marine Science) used both stable and radio- carbon isotopes to characterize the total and water-soluble fractions of organic matter in aerosol samples from watersheds.