The facility was initially established in 1989 for analysis of radiocarbon in samples collected during the World Ocean Circulation Experiment. Detailed reports (pdf) of these analyses including ancillary information have been regularly reported by NOSAMS to the WOCE principal 14C investigators and to the WOCE Hydrographic Office (WHP). These data are available electronically through the WHP.

For references to publications and reports resulting from this research including access to the original text of final data reports for the various WOCE legs and copies of several grey literature reports see the GLobal Ocean Data Analysis Project web pages. The "Data and Data Visualization Tools" provides access to graphics as well as downloads of data compilations and mapped fields. Under "Publications" the following two pubs are the most useful descriptions of the work and can be directly downloaded from the site:

In future years, the program on Climate Variability and Predictability will continue surveys of the distribution of radiocarbon in oceanic DIC. Dr. Ann McNichol, the NOSAMS staff chemist and one of the co-PIs on this proposal, has submitted a proposal to manage collection of samples and provision of radiocarbon analyses to CLIVAR. This proposal was funded to provide approximately 3960 samples over a six-year period beginning in 2003.  Learn more at www.clivar.org 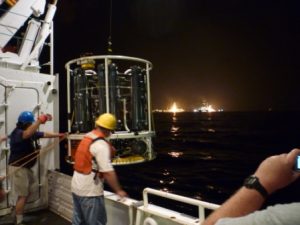 Spills of oil and other industrial products derived from fossil fuels can be studied using 14C.  The carbon in these products has been stored in crustal reservoirs for millions of years.  All of the 14C has decayed.  When soils and other natural media are analyzed, the presence of petroleum derivatives is signaled by levels of 14C lower than those encountered in unpolluted settings.  A salt marsh on Buzzard’s Bay, in West Falmouth, was fouled by an oil spill in 1969.  Since then, it has provided a laboratory for the long-term study of such spills.  Two recent reports linked below describe these investigations and the role of radiocarbon studies.

In general, 14C serves as a “negative label” for products derived from fossil sources.  Tracing experiments using conventional, positive labels can provide spectacular sensitivity, but they require injection of isotopically labeled materials in natural environments.  Moreover, the time clock for such experiments starts with the injection.  If slow, natural processes are to be studied, the experiment must also be very long.  Exploitation of the absence of 14C as an inherent, natural tracer does not suffer from those disadvantages.  And, when analyses are tightly focused – on single compounds, or classes of compounds, for example – its sensitivity is more than adequate for the exploration of important questions.  At whoi, Timothy Eglinton, Chris Reddy, and John Hayes are developing these techniques in a project entitled “Molecular-Isotopic Tools for Environmental Research,” funded by the National Science Foundation’s Division of Chemistry.

With each report of AMS results, we ask that investigators send us a list of publications in which they've utilized radiocarbon results produced by our facility. The PDF-formatted document linked below lists citations we have accumulated since the inception of the facility and while not exhaustive, represents the body of work from over 500 individual investigators who have asked us to analyze more than 22,000 samples for a wide variety of global change studies. In addition to these, more than 15,000 seawater DIC samples have been analyzed as part of the WOCE and CLIVAR programs.

GEOTRACES is an international program which aims to improve the understanding of biogeochemical cycles and large-scale distribution of trace elements and their isotopes in the marine environment. Scientists from approximately 35 nations have been involved in the program, which is designed to study all major ocean basins over the next decade.  Learn More at: www.geotraces.org

GO-SHIP brings together scientists with interests in physical oceanography, the carbon cycle, marine biogeochemistry and ecosystems, and other users and collectors of hydrographic data to develop a globally coordinated network of sustained hydrographic sections as part of the global ocean/climate observing system.