In March 2010 a team of WHOI experts emabarked on an Arctic expediton out of Barrow, Alaska.

WHY? Although the importance of the Arctic in global climate change is widely recognized, a critical component of the Arctic system has been largely overlooked: The inflow of Pacific Water and its role in maintaining the Arctic halocline. In particular, there is a need to understand the processes by which Pacific Water flowing through the Bering Strait is modified in the shallow Chukchi Sea and then transported to the western Arctic basin. The transport most important to halocline properties is that which occurs in winter beneath ice cover. This process establishes hydrographic conditions in the upper 200 m of the Arctic basin that determine the relative influence of Pacific and Atlantic water, and may profoundly affect the thickness and extent of Arctic sea ice. The narrow passage between Point Barrow, Alaska, and the flank of Barrow Canyon is a critical “choke point” of the system, where a significant portion of the Pacific Water inflow is concentrated subsequent to modification by shelf processes, but prior to exchange with Arctic waters. We set out to obtain high-resolution hydrographic transects across this choke point in winter, using REMUS-100.

A REMUS-100 was modified to operate under the ice and is referred to as the Icebot. 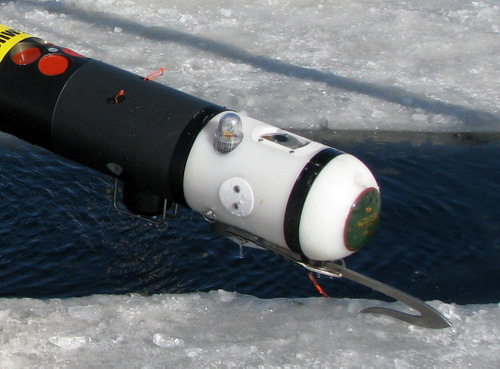 » The Icebot: A video documents expedition to use robots under Arctic ice From Oceanus Magazine