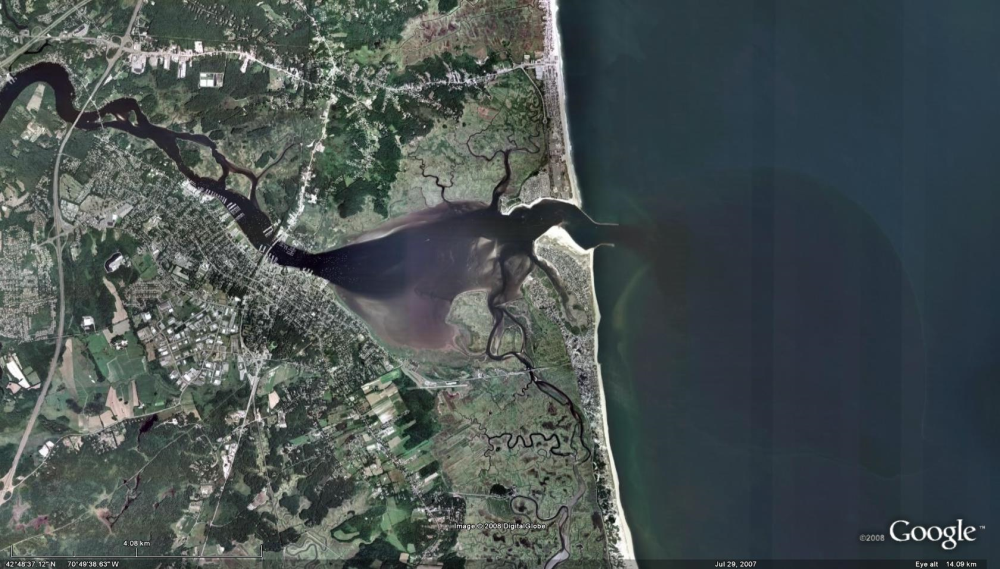 Salt flux and mixing in the Merrimack River estuary

The Merrimack is a tidal salt wedge estuary, where the length of the salinity intrusion is similar to the tidal excursion. Relatively shallow channel depths, strong tides, and sharp density fronts make tidal dispersion the dominant mechanism for salt flux into the estuary, in contrast with deeper systems like the Hudson where the mean estuarine circulation dominates the salt flux (Ralston et al. 2010a). Sharp fronts at bathymetric transitions lead to strongly sheared, stratified flows, and mid-water column mixing due to Kelvin-Helmholtz instabilities that is extremely efficient and represents a significant fraction of the total mixing in the estuary (~1/3). However, bottom boundary generated turbulence that is far more energetic can mix weak stratification after the fronts have broken down and accounts for most of the buoyancy flux, albeit inefficiently (Ralston et al. 2010b). More recently, salt flux in the Merrimack has been recast using the total exchange flow concept, which bins flux by salinity class rather than by Eulerian position. The TEF approach also demonstrates the importance of the tides, but it allows the salt flux in the Merrimack to be compared directly with the much longer, deeper, and exchange-flow dominated Hudson estuary [Chen et al. 2012]. This work was funded by NSF. 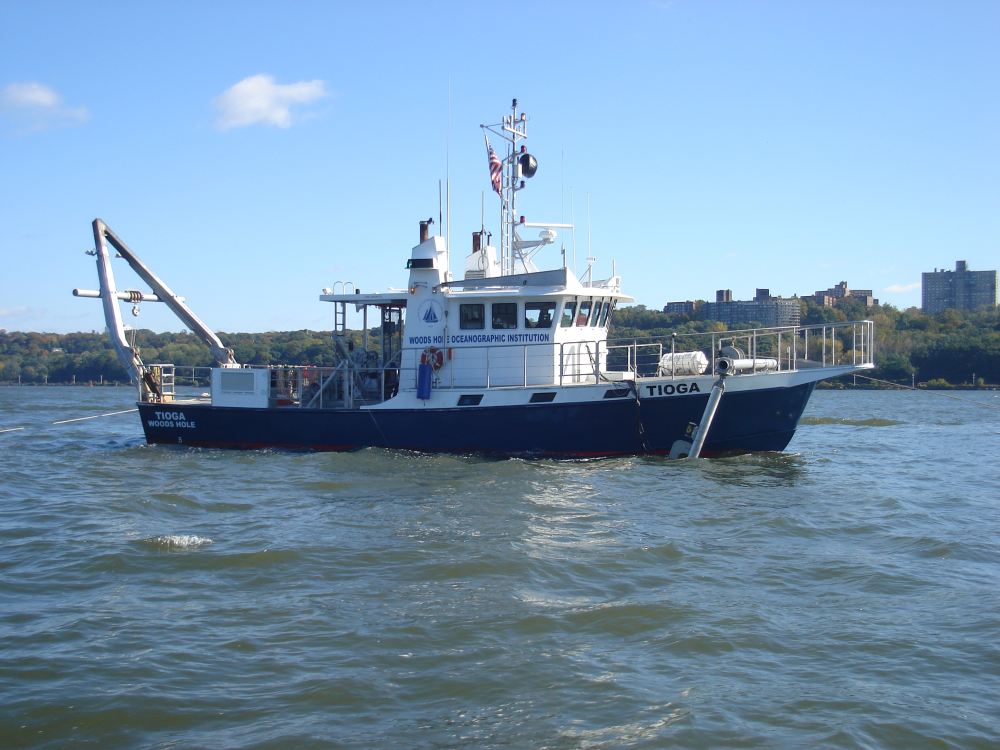 Salt flux and subtidal dynamics in the Hudson

In many estuaries, the density gradient between salty ocean water and fresh river water drives an exchange flow that is landward near the bed and seaward in the surface layer. The estuarine circulation in much weaker than the tidal velocities sloshing back and forth twice a day, but the steady flow provides a  dominant mechanism for exchange of salt and other material from the ocean into the estuary. We use observations in the Hudson River estuary and a relatively simple model to examine the factors regulating this subtidal circulation. Tides and stratification modulate the mixing that shut down the circulation during spring tides and allow it to spin up during neaps, but wind and the meteorological fluctuations in sea level also play prominent roles at shorter time scales. With the model we link the Hudson with San Francisco Bay, finding that in each case the along-estuary bathymetry has a leading-order effect on the length of the salinity intrusion due to the strong depth-dependence of the estuarine circulation [Ralston et al. 2008]. The estuarine exchange can also be characterized using the total exchange flow concept, where flux is binned by salinity class rather than by Eulerian position in the cross-section. Doing so obviates the somewhat arbitrary distinctions between steady and tidal exchange processes, and it allows us to put the salt flux processes in the Hudson on the same continuum as the much shorter, shallower, and more energetic Merrimack [Chen et al. 2012]. This work was funded by NSF and the WHOI post-doc program. 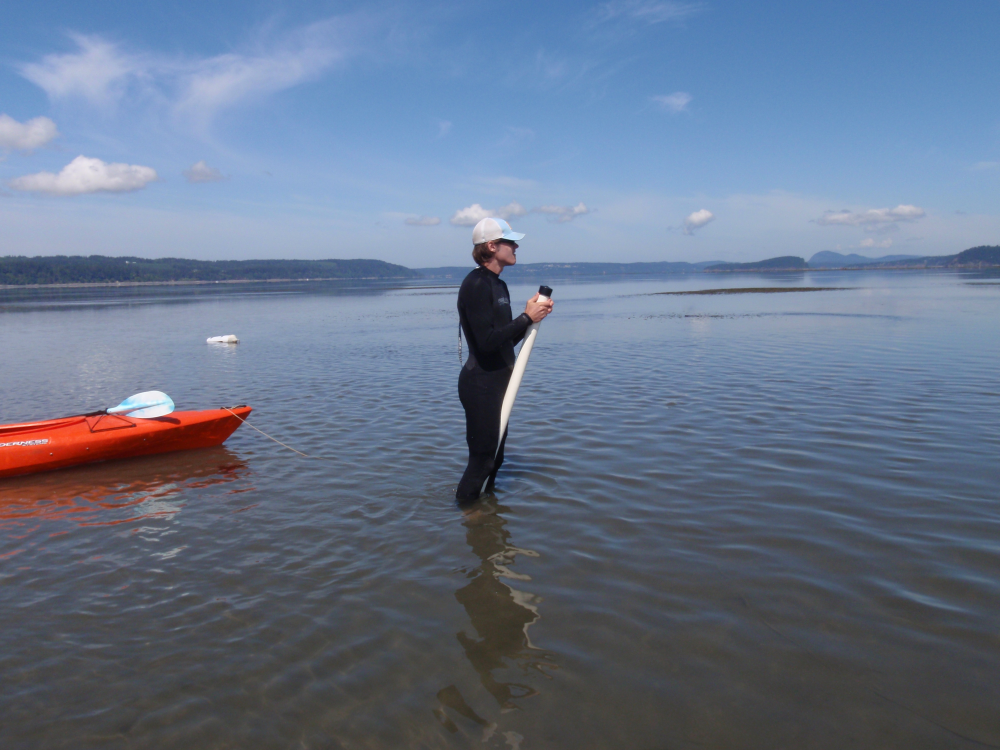 Stratification and sediment transport on the Skagit tidal flats

Along coastlines with large tidal ranges, vast sand or mud flats are exposed and inundated with each tidal cycle. The cycle of wetting and drying creates a dynamic flow environment, and rivers flowing through tidal flats add a source of buoyancy and stratification. Even though the water depths are extremely shallow (similar to the tidal range), the fate of sediment being delivered by the rivers depends on the estuarine circulation and stratification over the tidal flats. We show that strong horizontal gradients in salinity and strong stratification greatly enhance trapping of fine sediment on deltaic tidal flats at the mouth of the Skagit River in Puget Sound. Export occurs predominantly around low tide, when the barotropic river discharge continues over exposed flats in narrow tidal channels, particularly during big spring tides [Ralston et al. 2013]. Related projects also examined how tidal non-linearities in the shallow flows enhance the landward sediment flux [Nidzieko and Ralston 2012], and the importance of local variations in the wind field associated with the complex coastal topography [Raubenheimer et al. 2013]. This work was funded by ONR. 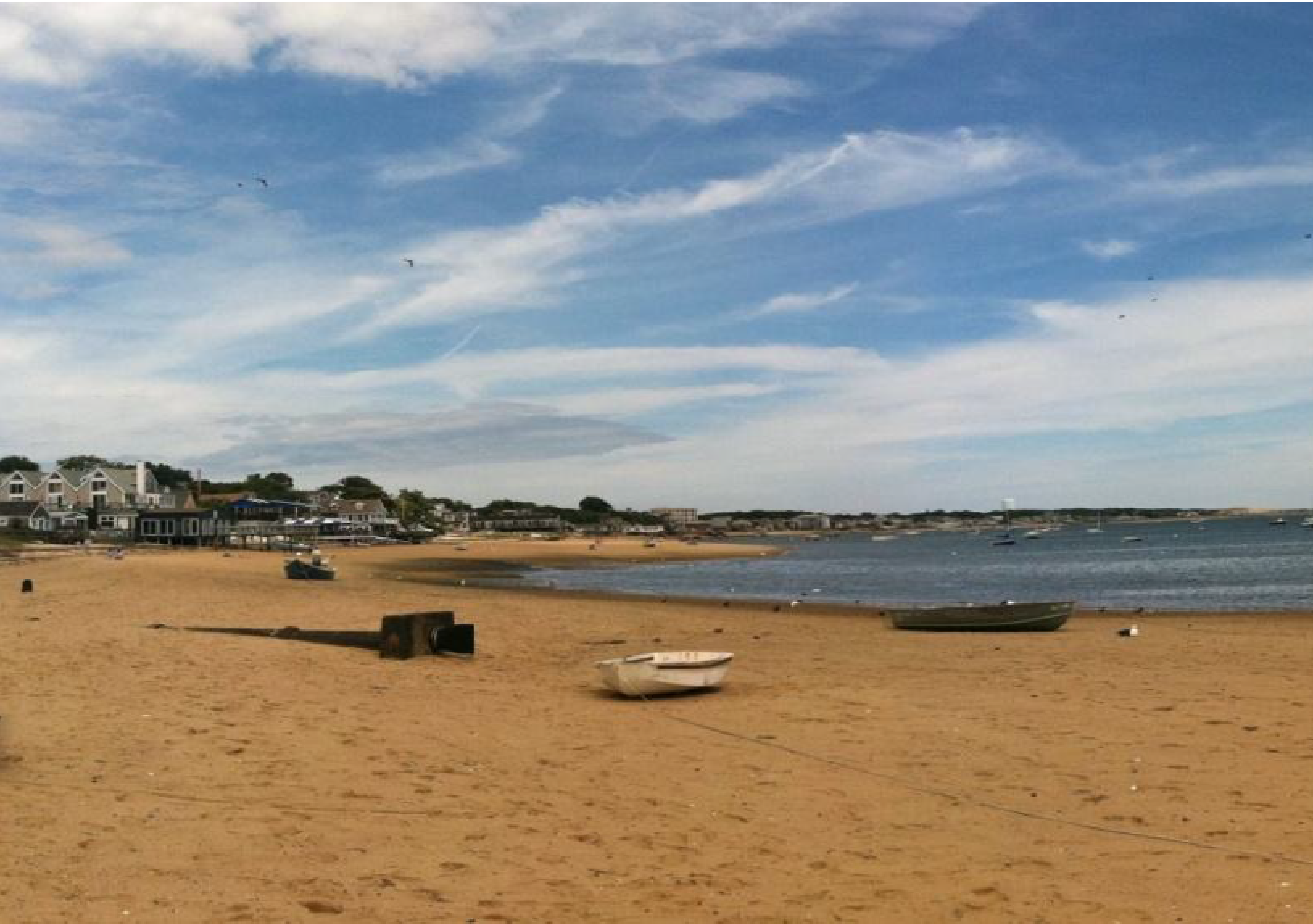 Levels of the fecal indicator bacteria Enterococcus (ENT) are monitored at beaches by public health officials to prevent contact of bathers with contaminated water. In work funded by the Woods Hole Center on Oceans and Human Health, we examined the conditions under which ENT can survive for extended periods in dry beach sand and can be transported into coastal waters. Elizabeth Halliday, a student working with Becky Gast, found that the abundance of ENT in dry sand and its survival in low moisture content was far greater than expected. Measurements of turbidity and salinity were used to demonstrate that tidal inundation during spring tides provided moisture to sustain ENT populations and mobilize them from the sand, transporting ENT through the estuarine groundwater beneath the beach and discharging into the nearshore water column (Halliday et al. 2015).

Oyster survival in the Hudson

The growth rates and susceptibility to disease of oysters depend on the ambient salinity conditions, and therefore on both their position in the estuary and on the response of the salinity distribution to changes in river discharge and tides. In moderate salinities during moderate discharge conditions, oysters located in a mid-estuary part of the Hudson with suitable benthic substrate thrived, but during high discharge years the growth rates at low salinities were unstainable. A hindcast of estuarine response over the past century provides an indication of the frequency of occurrence of such low salinity conditions, and a means of quantitatively assessing the likelihood of such conditions under future climate conditions that are projected to be wetter in the Northeast (Levinton et al. 2011). This work was in collaboration with Jeff Levinton at Stony Brook.

A. fundyense is known to migrate vertically, although the specific cues for the vertical migration, for example irradiance, nutrients, or avoiding predation, are not clearly established. Observations in the Gulf of Maine often find enhanced cell concentrations near the surface and near the pycnocline, 30-40 m deep. While the distances are too great for synchronous diel migration with the solar cycle, a 1-d model was able to show that asynchronous vertical migration to access higher nutrient concentrations near the pycnocline could lead to the observed bimodal distributions (Ralston et al. 2007).  This work was in collaboration with Dennis McGillicuddy.

Waves in the Red Sea

A wave model coupled to a high-resolution wind model showed that the dominant wave patterns in the Red Sea are driven by two key sources: the seasonal monsoon winds oriented along the basin, and intermittent, high intensity, mountain gap winds due to the surrounding orography. The largest waves in the model results were generated by the mountain gap winds and impacted long stretches of coastline at certain times of year, potentially influencing transport over coral reefs. The wave model results depended significantly on resolution of the wind model forcing it (Ralston et al. 2013).