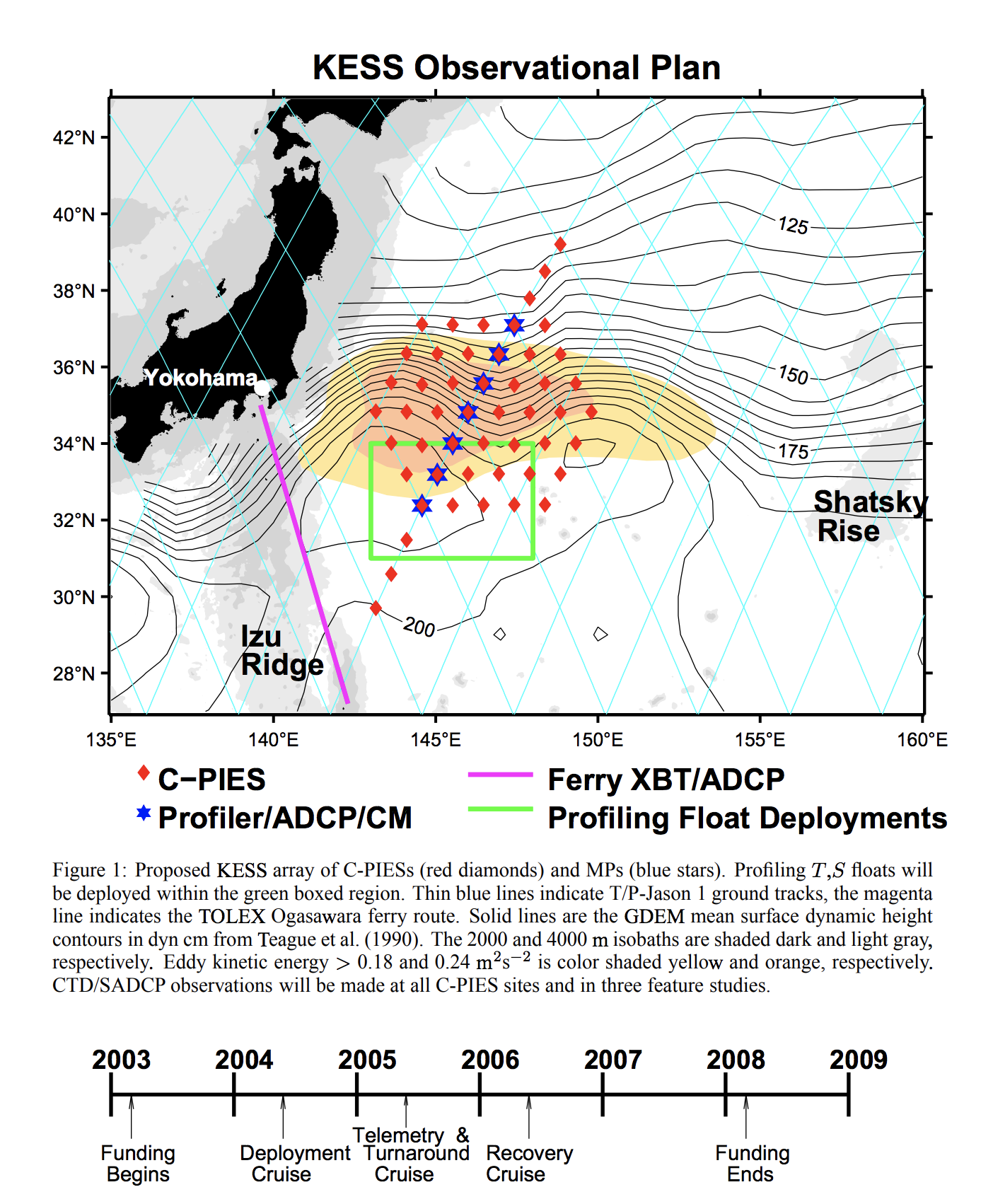 Kuroshio Extension System Study (KESS) is a collaborative effort between the Woods Hole Oceanographic Institution, the University of Rhode Island, and the University of Hawaii. The purpose of KESS is to understand the processes that govern the variability of and the interaction between the Kuroshio Extension and its recirculation gyre. To do this it will employ a large array of in-situ measurements from combination pressure gauge and inverted echo sounders, current meter moorings, and profiling floats, together with satellite altimeter and sea surface temperature data.

Understanding the processes that govern the variability of and the interaction between the Kuroshio Extension and the recirculation gyre is the goal of this study. Processes coupling the baroclinic and barotropic circulations will be examined by case studies of the local dynamical balances, particularly during strong meandering events. The mechanisms by which water masses are exchanged and modified as they cross the front will be characterized. The objective is to determine the processes governing the strength and structure of the recirculation gyres in relation to the meandering jet. 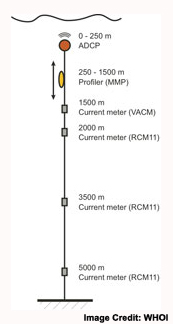 Principal Investigators cooperating from three US institutions postulate dynamical and thermodynamical connections from mesoscale eddies to gyre-scale recirculations and to global climate variations and propose observations designed to test these hypotheses. They will deploy a state-of-the-art array consisting of moored-profiler and current-meter moorings and inverted echo sounders equipped with near-bottom pressure and current sensors. Shipboard surveys will conduct case studies of the water properties and currents throughout the water column. Profiling floats will monitor the temperature and salinity structure in the recirculation gyre south of the Kuroshio Extension. The proposed approach makes extensive use of satellite data (surface temperature and sea-surface height). They will also collaborate closely with Japanese scientists studying the overall Kuroshio system.

The Kuroshio Extension system is the right place to test hypotheses formulated from previous observational and modeling studies because of its distinct stratification, bathymetry, and thermohaline circulation. The time is right to conduct a study of the Kuroshio Extension system. Over the last several decades a number of substantial programs have been undertaken, focused on different parts of these western boundary currents, mostly in the Atlantic. These include studies of the Brazil-Malvinas Confluence, the Western Tropical Atlantic Studies, the Subtropical Atlantic Climate Study, and the North Atlantic Current Study. The program that is most closely related to this proposal and, arguably the most ambitious, was the Synoptic Ocean Prediction Experiment. These studies fundamentally changed the scientific community’s understanding of the interconnected system of currents, recirculations, eddies, cross-frontal exchange mechanisms, and processes affecting the upper ocean heat budget. This improved dynamical understanding enables these scientists to pose new questions treating the western boundary current regime as a coupled system, linking eddy and gyre and global scales. Today’s fundamentally improved remote-sensing, in situ observational, and computing abilities enable them to address these questions in a comprehensive manner.

The National Oceanic and Atmospheric Administration and National Science Foundation funded this research.