It has been thirty years since the barge Florida ran aground in Buzzards Bay, spilling 175,000 gallons of diesel fuel into Wild Harbor and fouling the beaches of West Falmouth, Massachusetts. But three inches below the seabed, it’s as if the spill happened yesterday.

In a study published in November in the journal Environmental Science and Technology, WHOI Assistant Scientist Chris Reddy (Marine Chemistry and Geochemistry) and colleagues observed that residues of the oil from that spill are still present in marsh sediments. The findings add to a growing body of evidence suggesting that oil can persist in the marine environment for a long time, even though surface sediments may appear healthy.

“We found that the oil had not weathered significantly, and most of the compounds typically found in oil were still present after 30 years,” Reddy says. “We don’t know whether this is the exception or the rule, but due to physical and chemical conditions, we believe that the oil at this location will persist indefinitely.”Though hardly the largest or worst oil spill on record, the West Falmouth spill is arguably one of the best studied. Three generations of WHOI scientists have sampled and analyzed the site, and the work is considered a baseline for studies of the long-term fate of petroleum products in marine sediments. In the early 1970s, WHOI geochemist Max Blumer made one of the first-ever uses of gas chromatography and mass spectrometry to study the degradation of spilled oil. Scientist Emeritus John Teal (Biology) and current Vice President of Academic Programs John Farrington also did extensive work at the site in the 1970s and in 1989 (after the Exxon Valdez spill in Alaska).

The team collected a 36-centimeter (14-inch) sediment core from the West Falmouth site and analyzed it using a novel technique known as two-dimensional gas chromatography. They found no evidence of petroleum residues in the top six centimeters (two inches) of mostly new sediment, or in the bottom eight centimeters (3 inches). But the central section of the core--from six to 28 centimeters (two to 11 inches)--contained petroleum hydrocarbons in concentrations very close to those observed shortly after the spill.The paper by Reddy et al was published just days before the Bahamanian tanker Prestige sank off the coast of Spain on November 19, 2002. That ship was carrying more than 20 million gallons of fuel oil, a third of which has already leaked into Atlantic waters. Researchers expect oil to seep out of Prestige for at least 40 to 50 years.

“When it comes to oil spills, it’s a lot like buying a home: location, location, location,” says Reddy. “Location can dictate how fast weathering can occur and the potential effects. I would wager that a lot of the oil that spilled from Prestige would biodegrade rather quickly due to the high-energy environment of the open ocean. However, some portion of the spilled oil has already impacted the coastline, where its persistence and impact may be more severe.”

“One of the reasons why oil persists at the West Falmouth site is that the oil impacted a very sleepy, low energy salt marsh,” Reddy notes. “The long-term biological effect is unknown since animals burrowing into these sediments can be exposed to high levels of some of these compounds.”

The oil spilled in 1969 by the barge Florida sullied the scenic and well-traveled beaches on the southwestern edge of Cape Cod. Three decades later, the oil remains mostly undiluted just below the surface. 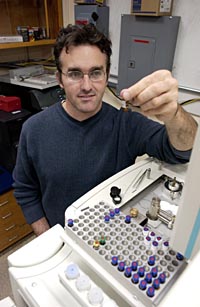 Chris Reddy and colleagues used an advanced chemical technique known as "comprehensive two-dimensional gas chromatography" to delinenate exactly how the oil has decomposed over the years. They found that not much has changed at all. (Tom Kleindinst, WHOI) 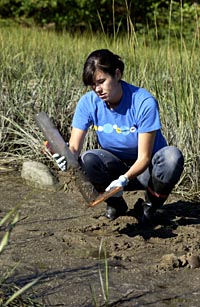 MIT/WHOI Joint Program student Helen White gathers a sample of marsh sediments from the Wild Harbor site in West Falmouth. Many of the sediment samples reveal oil from the 1969 spill is just inches below the newer surface sediments. (Tom Kleindinst, WHOI)