While Oil Gently Seeps from the Seafloor 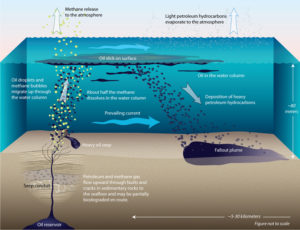 This illustration shows the route traveled by oil leaving the subseafloor reservoir as it travels through the water column to the surface and ultimately sinks and falls out in a plume shape onto the seafloor where it remains in the sediment. (Illustration by Jack Cook, Woods Hole Oceanographic Institution) 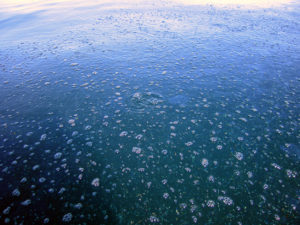 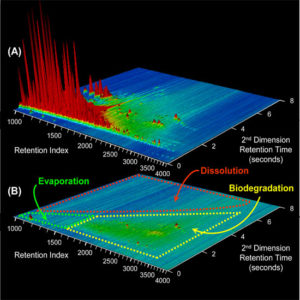 Two-dimensional gas chromatograms show how many compounds were in the oil at the ocean surface (top) and how few compounds remain in the sediments (bottom) after parts of the oil dissolved into the water, evaporated into the air, or were degraded by microbes. (Chromatogram by Bob Nelson, Woods Hole Oceanographic Institution) 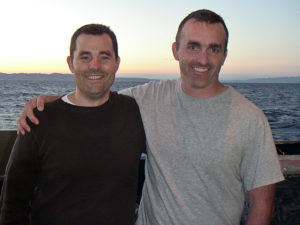 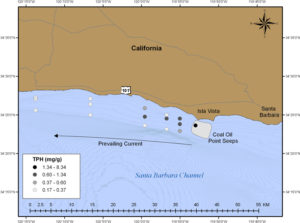 Researchers found that the total petroleum hydrogen (TPH) content in sampling locations (dots) was highest in sediments closest to the seeps and gradually diminished over distance as it was dispersed by currents—much the way smoke trails away in the wind. 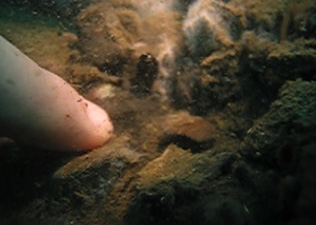 Oil on the seafloor

I investigate what happens to oil spilled into the ocean—with an eye toward finding better ways to “engineer” cleanups. But the brass ring has always hung out of my reach. When oil hits the water, chemical changes start occurring fast. It’s not like I can predict where or when an accidental spill is going to occur, so I usually can’t get to spills fast enough. I literally and figuratively miss the boat.

When the M/V Cosco Busan struck the San Francisco-Oakland Bay Bridge in November 2007 and spilled 58,000 gallons of heavy fuel oil, for example, I had to mobilize singlehandedly to get plane tickets, transport scientific gear, outline a plan to take samples, and arrange for a boat.

In the immediate aftermath of an oil spill, rapid response teams have their hands full with their primary mission of preventing more spillage and mitigating the damage. They aren’t in the business of sampling and studying oil. It took me a week to get on the scene, and during those precious seven days, nature already had moved the oil and changed its chemical composition. What happened to the oil in those seven days?

“Oil,” you see, is actually a motley stew made up of thousands of different compounds—each with distinctive chemical structures that give them distinct properties. When oil spills into the ocean, some compounds evaporate, while others break down in sunlight, or dissolve in seawater, or get eaten by microbes, or sink and stick to sediments. By the time I arrived, I had missed half the action. I could not explain what happened and why with much certainty.

An oil spill every day

But I got a break in January 2005. I was aboard a 20-foot motorboat a mile offshore from the campus of the University of California at Santa Barbara (UCSB) with my colleague, Dave Valentine, a UCSB marine geochemist. The water was calm and flat—dampened by a widespread, iridescent film of oil on the surface. Big oil patties floated about. The air smelled like diesel fuel.

By any definition, it was a classic oil spill. But we were the only boat in the area—no Coast Guard, no oil booms, no throngs of cleanup crews in white Tyvak suits, no helicopters, no media, and no shipwreck.

Why? Because this oil spill was entirely natural. The oil had seeped from reservoirs below the seafloor, leaked through cracks in the crust about 150 feet (45 meters) under water. Lighter than seawater, the escaped oil floated to the ocean surface.

It was one of those days in your career that you never forget. Adrenaline raced through my body, and my brain was in overload, thinking about the research that could be done at this site. Nature was offering an ongoing experiment that was impossible (not to mention illegal) for me to perform. Off Santa Barbara, there’s an oil spill every day, allowing us to take a close look at a process that previously eluded our grasp.

I vividly remember standing on the boat and calling my lab manager, Bob Nelson, telling him to book a plane ticket and pack a long list of gear. We returned days later to start investigating the fate of oil in the coastal ocean, using this readily accessible natural laboratory.

I had learned about natural oil seeps in graduate school, and I knew that they account for about 50 percent of oil that ends up in the coastal environment. That’s five times as much oil as is delivered by accidental spills.

The Santa Barbara seeps, for example emit 5,280 to 6,600 gallons (nearly 20 to 25 tons) of oil per day, and natural seeps have been active for hundreds to thousands of years. Local Native Americans used the oil to waterproof their boats. But I just didn’t appreciate how spectacular they were and what a powerful opportunity they provided to study oil spills.

In our initial research, Dave and his scuba-diving team collected bubbles of oil that trail out in a line from a seafloor seep (we call these “stringers”). We compared this oil with samples extracted from a nearby offshore drill rig, which tapped into the same reservoir that leaked oil out of the seafloor seeps.

We analyzed the specimens using a technique called “comprehensive two-dimensional gas chromatography (GC×GC).” The instrument reveals distinct chemical “biomarkers” in the oil, which like genetic markers allow us to track the oil’s source and lineage. It also lets us identify and differentiate the thousands of compounds that oil is composed of.

To our surprise, we discovered for the first time that on the oil’s journey up to the seafloor, approximately 1,000 compounds in the oil were devoured by microbes living in the rocks beneath the sea floor. Some ate the oil and created intermediate byproducts. These were subsequently eaten by other microbes that likely converted the oil into natural gas.

We also compared the compounds in oil seeping out of the seafloor with those in oil at the sea surface. We discovered that about 10 percent of the remaining compounds in the oil evaporated within seconds or minutes after it had floated to the surface. That was something we had never been quick enough on the scene to measure before in accidental spills.

With UCSB graduate student George Wardlaw as lead author and three other co-authors, we reported our findings in the October 2008 issue of Environmental Science & Technology.

Then it was on to the next steps—tracking how much oil at the surface sank back into the mud atop the seafloor.

The fallout from the seeps

In the summer of 2007, we brought in a boat quite a bit bigger than the little motorboat we used in 2005—Woods Hole Oceanographic Institution's (WHOI) 274-foot-long research vessel Atlantis, the mother ship for the research submarine Alvin. The two usually work in the deep ocean, but this time Alvin dove to only a fraction of its 4,500-meter depth capacity, allegedly setting a record for its shallowest science dive ever.

We used Alvin to observe spectacular shows of oil and gas seeping and bubbling up from cracks at the ocean bottom. And one evening after Alvinsurfaced for the night, I, Dave, and Chris Farwell, a UCSB undergraduate student at the time (and my cabin mate aboard Atlantis) began collecting samples of sediments starting 2.2 nautical miles (4 kilometers) downstream of the oil seeps.

We sampled 16 locations with various water depths over a 35-square-mile (90-square-kilometer) grid, with an additional comparison sample obtained from within the seep field itself. I tip my hat to Capt. A.D. Colburn, the Atlantis crew, and shipboard technician Dave Sims for making this sampling effort so seamless in shallow coastal waters in which they don’t typically work. We finished as the sun was rising and the Alvin group was preparing the submarine for another dive.

After the cruise, under Dave’s (and occasionally my) direction, Chris began a thorough study on these samples. He came to Woods Hole for a week, staying with me and my wife Bryce and working in my lab. (To earn his keep, I made him scrape wallpaper in our house.)

Chris found plenty of oil in the samples to keep him busy. Once again, biomarkers revealed by GC×GC showed that the oil in the sediments matched the oil floating on the sea surface, the oil leaking out of the seeps, and the oil extracted from the subseafloor reservoir. We could say with confidence that the oil we found in the sediments came from the oil reservoir and not from an accidental spill or runoff from land.

In collaboration with Libe Washburn, a physical oceanographer at UCSB, Dave and Chris estimated that oil on the surface stayed in the water from about 10 hours to five days before settling back into the sediments. Chris’s study revealed that the oil content was highest in sediments closest to the seeps and gradually diminished over distance as it was dispersed by currents—much the way smoke trails away in the wind.

At WHOI, Bob Nelson and Emily Peacock found that the composition of the oil in the sediments had changed significantly from what we had found floating in the ocean surface; only a few, very large chemical compounds remained in the sediments. Our findings were published in the May 2009 issue of Environmental Science & Technology.

Nature had done an amazing job on the oil, but nature appears to have a limit on its capacity to break down oil. Why this happens is one of my keen research interests. We think the compounds in the sediments have remained because their bulky structures make them hard to evaporate, insoluble in water, and more difficult for microbes to digest.

Microbes are astonishing and voracious little critters. They can eat almost anything, but our research at the Santa Barbara oil seeps shows they do it systematically: They select compounds whose size and shape are the easiest for them to degrade. So they will chow down on a simple, straight-chained alkane, but will avoid a hopane with twice as many carbon and hydrogen atoms bonded in rings that offer difficult access for enzymes. If they were at a buffet, they would devour the pudding, soup, and rice first and eschew the chewy corned beef and stale crusty bread.

Another result of our study is that for the first time, we can quantify the amount of oil residue that ends up in seafloor sediments after a “natural” oil spill. To compare the amount the oil in the Santa Barbara sediments with a figure people might understand, it's equivalent to 8 to 80 times the oil spilled in the Exxon Valdez accident. But our study by no means is a direct comparison on the overall fate and impacts of the Exxon Valdez spill and the Santa Barbara seeps.

That estimate is as close as we could get, since we don’t know how thick the layer of sediments is. But before this research, for all we knew, it could have been the equivalent of 0.0001 or 10,000 Exxon Valdez spills.

Many people in the Santa Barbara region still believe that oil found in the ocean and on nearby beaches comes from oil rigs, but our research points the finger at the natural oil seep. At the same time, this natural oil seep is teaching us many extraordinary lessons about how oil responds in our ecosystem. And that offers better strategies for people to respond to the oil they spill accidentally into our ecosystems.

This research was funded by the National Science Foundation, the U.S. Minerals Management Service, the California Toxic Substance Research and Training Program, the Department of Energy, the WHOI Coastal Ocean Institute, and the Seaver Institute.