Phytoplankton & bio-optics under the ice in the Arctic Ocean

One of the hardest places to study phytoplankton ecology is in ocean regions that are perennially ice-covered, such as much of the central Arctic Ocean. In the Laney Lab we work on new technology for measuring the distribution, seasonality, and interannual variability in phytoplankton assemblages that live under perennial ice cover in polar oceans.

Over the past three years eight Ice-Tethered Profilers have been deployed in Arctic under-ice ecosystems with a special suite of bio-optical sensors developed in the Laney Lab. These profilers travel along 800m wire tethers which are anchored in the surface ice and move vertically up and down this tether, collecting physical and bio-optical information and relaying this to satellite, bringing under-ice data to our lab in near-real-time. In August 2012 one of these profilers (ITP48) became the first to measure an entire year of phytoplankton distributions with daily resolution, under Arctic ice cover in the Transpolar Drift. More information on the initial findings from these deployments can be found in our 2014 paper (link to the right).

The units deployed were:

The bio-optical sensor suite for the ITPs include a WETLabs 'triplet' fluorometer custom-engineered to work at 2000m depth, a Satlantic PAR sensor, and an electromechanical shuttering system that protects the optical faces of these two sensors (Satlantic Bioshutter-II). The sensors are mounted on the top endcap of the ITP, adjacent to the standard SBE41CP condutivity-temperature-depth (CTD) sensor. An integrated dissolved oxygen sensor is also part of the measurement complement. Low-power control electronics inside the endcap interface this suite to the ITP main controller and provide an easy serial interface for polling and controlling this suite of sensors and actuator. The mechanical engineering and design of this compact bio-optical sensor suite was done by Terry Hammar's group in AOPE. One of the most critical design requirements was that the entire system fit down the standard 11" hole drilled for ITP deployments.

More data from ITP48 and the rest of the bio-optical ITPs can be found on the ITP data portal. Please note that the data on this portal are raw instrument transmissions only, and should not be used for any posters, publications, or other analyses without careful inspection by the end user. Calibration information on the various sensors is provided in a link to the right.

I have done extensive quality control on these profile data and higher grade data sets are available. Researchers interested in using these more fully processed ITP bio-optical data in their research should contact Sam Laney for more information about data format and opportunities to collaborate with these data. 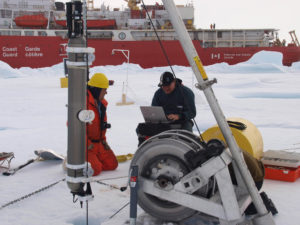 Deployment of an Ice-Tethered Profiler with bio-optical suite. Field engineers rig a tripod to lower a 850m cable through the ice with a weight attached to the end. The ITP is attached to the cable and a final check is performed to ensure that the profiler's program is correct. The bio-optical sensor suite for measuring phytoplankton abundance and other optical properties is visible at the top of the profiler. 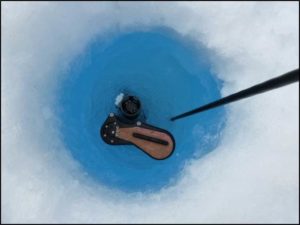 The optical sensors on this Ice-Tethered Profiler are just about to submerge beneath the Arctic Ocean for the first time. These profilers can last over a year in the ocean, making daily vertical measurements of ocean physics and biology. (Steve Lambert (WHOI)) 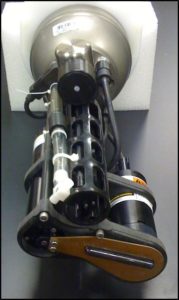 The bio-optical suite developed for the ITP includes a new self-calibration/self-characterization system which incorporates optical feedback between sensors. This feedback is done by a rigid image conduit embedded in the shutter, which directs excitation light from the triplet fluorometer to the PAR sensor. Decreases in this level of feedback over time indicate a loss in coupling, due to increases in biofouling and/or decreases in the fluorometer output.

This research is part of WHOI's Ice Tethered Profiler program: