The driving force for developing the Towed Digital Camera and Multi-Rock Coring System (TowCam) was the U.S. oceanographic community's need for an imaging and sampling system with both routine and rapid-response capabilities. This meant that the system should be usable from any University-National Oceanographic Laboratory System (UNOLS) ship or other vessel equipped with standard CTD winch and 0.322" coaxial cable.

The solution designed -- the TowCam -- can sample the glassy, lava seabed of mid-ocean ridge crests, do reconnaissance for a wide range of deep-sea mapping and sampling programs for geologists, biologists and chemists, and collect water rock chips from deep ocean. It provides a method for scientists to accurately determine the location and geological setting of recent submarine volcanic eruptions and associated hydrothermal venting.

The WHOI TowCam is an internally recording, digital, deep-sea camera system that also acquires volcanic glass and seawater samples using up to eight rock core winches and four 1.2 liter or 5.0 liter Niskin bottles, meanwhile collecting and transmitting CTD water properties data. The TowCam is towed by a standard 0.322" coaxial CTD sea cable, that permits real-time acquisition of digital depth and altitude used to aid analysis of the digital images, and in creating accurate near-bottom topographic profiles. A foward-looking altimeter is used for obstacle avoidance during the tows. The conducting cable also facilitates real-time, manual triggering of rock cores and Niskin bottles via the CTD's analog ports.

By operating either at night in between Alvin dives or during other seagoing programs, the TowCams capture information that is recorded and analyzed in near-real time. These data can then be used to plan the course of action for othere scientific endeavors or subsequent Alvin dives.

The TowCam frame is made of stainless steel with a bridle and lift point suitable for connection to standard UNOLS CTD terminations. The frame is constructed to withstand moderate abuse in order to protect the camera components from contact with the ocean bottom or the ship and shipboard equipment. The design and large sail area of the ‘tail’ provide towing stability to the sled. (The TowCam orientation during a traverse is within ~5° of the course over ground of the ship.)

The TowCam is connected to the end of the CTD wire using either a molded termination or a ‘Chinese-finger’ termination. A ‘weak-link’ system has been designed to prevent damage to the cable and release of the frame from the seafloor if it snags on the bottom. At 2500m depth, the total weight of the system in water is roughly 800 lbs.

A further capability of the TowCam system is to take water samples at depth. This is achieved using four (4) Niskin bottles mounted on system. Niskin water bottle triggering is done using analog ports on the SeaBird SBE25 CTD which fire a solenoid, thereby mechanically releasing the monofilament cord holding open the Niskin bottle. The TowCam can carry either 1.2 or 5 Liter Niskin bottles, and in standard configuration carries two of each.

The water samples, used in conjuction with CTD water properties data, can be used to target areas of interest because of anomalies in potential temperature, turbidity, or conductivity.

The TowCam system is also equipped with WHOI designed rock-core winches. The corer units (up to 8 corers can be used on the frame at one time) permit the user to remotely take samples of volcanic glass in seafloor at the Mid-Ocean Ridge crest or similar settings where basalt outcrops are expected. Sampling sites are predetermined by local morphology or inferred geological contacts recognized in high-resolution side-scan sonar imagery.

When a corer is triggered via the SBE33 deck-unit and command module, the corer winch on the TowCam starts turning, and in doing so releases a 3.5-kg,wax-coated, stainless steel core head. The corer then free-falls to the sea floor on a 10 m, 100-pound-test monofilament tether. The core head impacts the bottom and is dragged over lava flows as the TowCam continues on, breaking off chips of glass which are embedded in the wax coating. Each corer winch is designed to reel up the tether in ~3-4 min.   At a mean altitude of five meters, the amount of time that the core head is actually in contact with the sea floor is about 1-1.5 min. At a speed of 1/4 knot, the core head travels about 10 m from release to retrieval. .

When the core head is fully retrieved, a current limiter prevents the winch motor from over-pulling and stops the motor. The core head is stowed inside a 9 cm-diameter, plexiglass tube beneath the core winch, and a mechanical gear-stop prevents it from redeploying. The time of each corer deployment is verified and recorded by the CTD system.

The TowCam uses a SeaBird SBE25 CTD system as the primary real-time data sensing and control system. The CTD provides standard depth, altimetry, temperature, turbidity, and conductivity data for the entire tow. The Command Release Module (CRM) was designed by WHOI engineers in collaboration with SeaBird engineers to provide the functionality of using the standard CTD system to trigger the sampling mechanisms. Samples are triggered either using the buttons on the SBE33 deck box or via the SeaSoft software GUI (Graphical User Interface).

CTD and image data are processed immediately after each tow. Navigation data depends on what the scientist using the system has configured, normally this is either layback from the ship's GPS navigation, or where TowCam is used in a LBL transponder network, a file of the LBL navigation versus time. Acquisition and processing of those data is the responsibility of the scientist in charge.

CTD data processing consists of converting the created data files to ascii text files. This is done easily and efficiently using scripts set up by the WHOI TowCam team which take the SeaBird hexadecimal files and convert them to text files containing: the CTD data at 1 Hz (CTD.txt), the CTD data for each time a photograph was taken (flash.txt), and a file with the CTD data each time a bottle or corer was fired (bottle.txt).

Images from the DSPL digital camera are 2048x1536 pixels. The images are batch renamed with the time of the shot as the name in the format "yyyy-mm-dd-hh:mm:ss" and are converted from native Nikon format to jpeg (.JPG) files. The images can then batch enhanced using a program such as Photoshop or  ACDSee.

Normally, if there is time, the TowCam engineer can make QT movies of the tow's imagery and html thumbnail pages for easy review of the data. 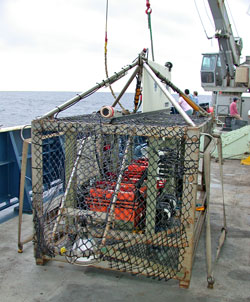 The four TowCam camera frames are staged as follows. The prototype frame (TowCam#1) (~1700 lb. air-weight, ~900 lb water-weight fully configured) is resident on R/V Atlantis for use as a nighttime survey system to complement Alvin diving operations. 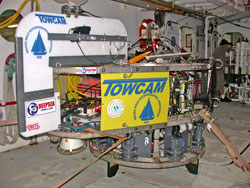 The second frame (TowCam#2; ~1500 lb air-weight, ~750 lb. water-weight fully configured) is available for use by any investigator requesting it and can be deployed from most ships in the UNOLS fleet that have a CTD winch and 0.322? conducting cable system. 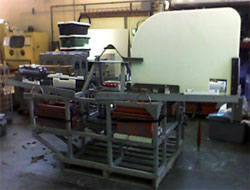 The third frame (same weight and capabilities as TowCam#2) is staged at NOAA-PMEL in Seattle, WA for use as an event response camera, CTD and sampling system for Ridge2000 time-critical science programs (used most recently in March 2005 for a JDF response cruise).