As a greenhouse gas, methane is potent (25 times more effective than carbon dioxide), but relatively short-lived (10-year residence time in the atmosphere versus 1,000 years for carbon dioxide). Much recent attention has focused on the potential for release of methane to the atmosphere from shallow submarine gas hydrate fields such as those on the continental shelf of eastern Siberia (Shakhova et al., 2005; Shakhova & Semiletov, 2007).

The majority of global methane release from the seabed, however, occurs much deeper, along active and passive ocean boundaries where its fate, and that of associated carbon dioxide, is poorly understood. In this project an inter-disciplinary team of early-career scientists will conduct nested-scale investigations (from millimeter to kilometer scales) using advanced mapping, in situ sensing, computational, and modelling approaches to study the transport and fate of greenhouse gases released from the seabed.

This work will be focused on an active plate boundary in the southeastern Caribbean, where numerous mud volcanoes and an active submarine arc volcano are located. The region is dominated by subduction of the North American plate beneath the Caribbean plate, which has given rise to the Lesser Antilles Arc volcanic system in the west, a deep ocean trench to the east, and the Barbados accretionary prism in between.

Although mud volcanoes are common along a variety of ocean margins, the Barbados mud volcano (BVM) field is particularly well developed. Geologically, these features are formed by fluids upwelling from deep beneath the seafloor that carry water, gas, and particles of sedimentary material to the seafloor where, over time, successive layers of outflow can form conical mounds reminiscent of terrestrial volcanoes up to 1 kilometer in diameter (Deville et al., 2006). In many cases, these systems are also associated with transient, anomalously high heat flow relative to background temperatures. Outflowing fluids are also typically enriched in methane that is believed to be thermogenic in origin, leading to the development of chemosynthetic ecosystems dominated by vesicomyid clams and bathymodiolus mussels at depths ranging from 1,000 to 5,000 meters depth (Jollivet et al., 1990; Olu et al., 1996, 1997).

While the precise TREET oceanographic research agenda will be determined based upon results as they emerge at sea, key themes include:

Parallel studies using the ship’s multibeam sonar systems and the Argus deep-tow camera system will enable surveys for new sites of seep flow prior to detailed ROV investigations (Brothers et al., 2013; Wagner et al., 2013). The team will attempt to quantify local fluxes that can be extrapolated to regional-scale fluxes of methane and carbon dioxide through coordinated observations using these two systems.

West of the BMV on the western flank of the Lesser Antilles arc and just offshore from the island of Grenada is Kick’em Jenny (KEJ), the most active and dangerous submarine volcano in the Caribbean (Devine & Sigurdsson, 1995). Over the past century, it has shown a history of progressive growth with explosive eruptions that pose hazards to local island populations in the Lesser Antilles (Dondin et al., 2012). Specific hazards include explosive eruptions that can breach the sea surface and the potential for tsunami generation from shallow water explosions or submarine landslides (Lindsay et al., 2005).

Kick'em Jenny was discovered in 1939 when an explosive eruption broke the surface, producing ash columns that reached up to 300 meters above the sea surface (Devas, 1974). There have been at least 11 eruptions since then, with the most recent in 2001. The first detailed survey of the volcano in 1972 revealed a conical structure 1,300 meters high, constructed on the western flank of the arc. The summit crater was found to be at a depth of 190 meters and approximately 180 meters in diameter.

Later work along the Lesser Antilles arc revealed that KEJ emits strong hydrothermal signals (Halbach et al., 2002; Koschinsky et al. 2007) and ROV surveys of the crater floor in 2003 soon after the 2001 eruption found venting of high-temperature fluids (more than 250°C) and gases along with the discovery of new species of vent-endemic worms (Wishner et al., 2005). Venting of fluids occurred within a small, sediment-filled depression inside the main crater of the volcano. The gases being discharged were not sampled at the time, but are believed to be rich in carbon dioxide and methane, as they are in many other arc vent-systems (Lupton et al., 2008).

Its shallow depth and close proximity to Grenada, makes KEJ an ideal location for a variety of interdisciplinary studies. Projects proposed to date include investigating both the structure of the volcano and the hydrothermal systems inside the KEJ crater plus a new suite of cold seeps on the flanks of KEJ that were only discovered in late 2013, since the start of the research program.  This second area where we will conduct our research would be of particular interest because it will allow us to compare and contrast processes at hot vents and cold seeps that are immediately adjacent to one another and, in parallel, to compare and contrast processes at active cold seeps in two distinct locations—on the KEJ flanks and at the Barbados Mud Volcanoes.

A novel laser line-scanning system, coupled with HD imaging from the ROV would be used in two independent studies aimed at quantifying the volume of hydrothermal fluids escaping from the seafloor and the relationship of that fluid discharge to major geological structures. Together with these estimates, determining the chemical composition of the gases being produced at Kick’Em Jenny will also provide an improved large-scale estimate of methane and carbon dioxide flows from these regions—a major priority of work based on E/V Nautilus.

If carbon dioxide is the primary gas being discharged, then there may be significant local ocean acidification effects with potential impacts on the surrounding biological communities and ocean chemistry. As at the BMV seep sites, stereo cameras on the ROV will be used to characterize the microbial and biological communities present and investigate their structure in relation to fluid venting and geochemical signals, as determined from in situ biogeochemical sensors. 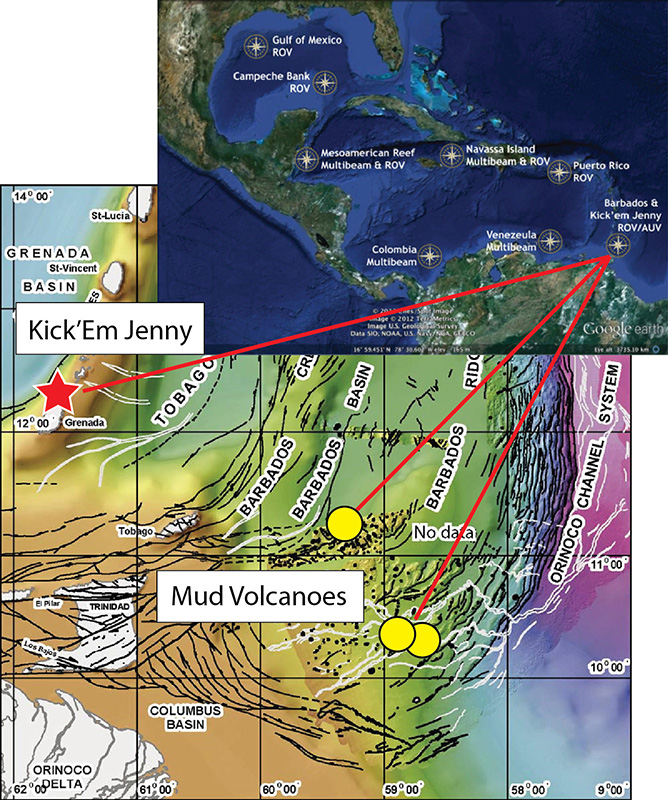