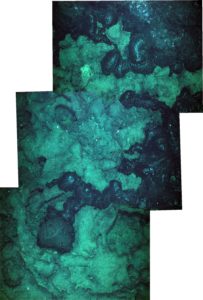 My research on mid-ocean ridges focuses on the physical processes of volcanic accretion and the construction of the ocean crust. I use acoustic imaging techniques to map seafloor geology in order to constrain the size and frequency of eruptions and intrusive events [Soule et al., 2005; 2009]. I place a significant emphasis on studying recent eruptions [Soule et al., 2007], for which we have better constraints on the distribution of lava and can more accurately evaluate the controls on volcanic deposition. Using submersibles and near-bottom photography, I closely examine flow morphology and collect samples for microanalytical studies of geochemistry and crystal and bubble textures. I currently have active research projects at the following deep-water ridges: East Pacific Rise (9-10˚N), Mid-Atlanitc Ridge (37˚N), Gakkel Ridge (85˚E), Axial Seamount, Juan de Fuca Ridge. 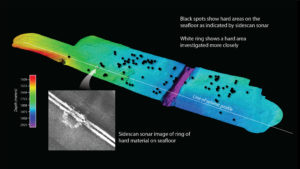 The Guaymas Basin lies within the Gulf of California. This young spreading center is overlain by ~1 km of organic rich sediment derived from high productivity due to oceanographic upwelling and nearby terrigenous sources. Although this is an active mid-ocean ridge, there is no volcanism on the seafloor. Instead, magmatic accretion occurs through the intrusion of sills into the sedimentary pile. Our recent cruise to this area allowed us to confirm that accretion by sills occurs over a ~80 km wide region spanning the spreading axis. This contrasts with the belief that magmatic accretion at ridges is quite narrow (<<5 km) and may be attributable to the overlying sediments. A consequence of sill intrusion is the release of carbon stored in the sediments and the wide region of active sill intrusion limits the carbon storage capacity of this, and potentially other, young rifted margins [Lizarralde et al., 2010]. 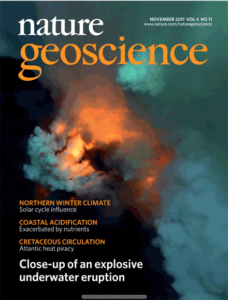 Recent evidence has called into question the belief that explosive eruptions were not possible in the deep ocean, especially on volatile-poor mid-ocean ridges. A recent cruise to the ultra-slow spreading Gakkel Ridge (85˚E) found the first evidence for an unconsolidated pyroclastic deposit on the seafloor (i.e., young) [Sohn et al., 2008]. Working with samples collected during this cruise and seafloor bathymetry and photography, we are evaluating the nature of volcanic accretion at ultra-slow spreading rates, and the mechanisms of volcaniclast production and dispersal in the deep ocean [Barreyre et al., 2010]. In addition, I am working on samples from the recent eruption of W. Mata seamount in the Lau back-arc basin [Resing et al., 2011]. Here, Strombolian-style bubble bursts were observed and samples were collected directly from these vents. I am using these samples to investigate the process of vesiculation and dynamics of magma ascent. 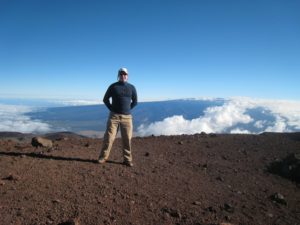 Subaerial lava flows are complex systems that experience time dependent changes in temperature and rheology, interact with pre-existing topography, self-organize into lava channels, and develop elastic carapaces over a plastic interior. My research aims to understand these and other mechanisms that control lava flow dynamics through field observation and analysis of lava crystal/bubble textures and geochemistry. Currently I am using airborne and ground-based lidar as a tool to constrain the physical character of lava flows on Mauna Loa and Kilauea volcanoes. These data can be linked to excellent observations of the emplacement of the eruptions to evaluate how flow morphology, roughness, channelization, and rheology reflect the emplacement dynamics.