Members of the Float Group develop, improve, and deploy floating robots that take profiles, or vertical series of measurements (temperature and salinity, for example) throughout the oceans. Many of the floats are part of Argo, a large international array of floats that measure the physical state of the upper half of the ocean across the globe. Learn about the WHOI Argo program. 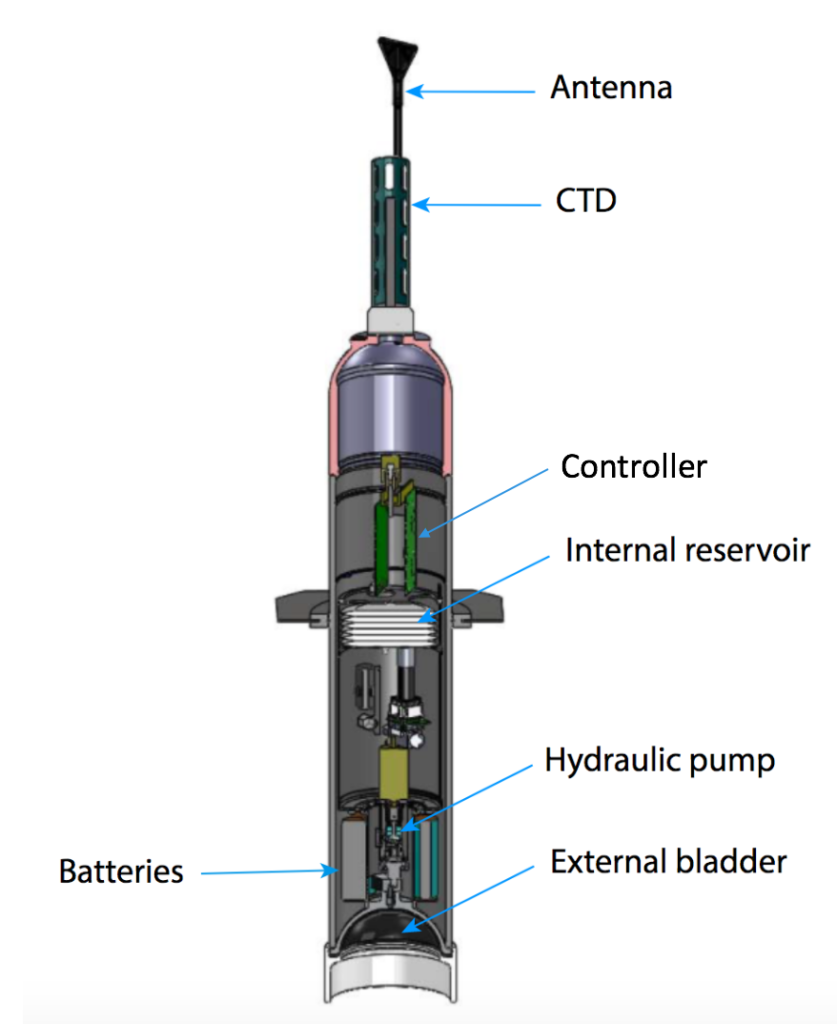 (Courtesy of Michael McClune at Scripps Institution of Oceanography)

The Float Group works with several types of floats, but they share a basic structure with the diagram to the left.

Antenna – All floats are topped with an antenna that allows them to communicate with GPS, to transmit their position, and Iridium satellites, to transfer the data collected in the last cycle. The Float Group can also send new instructions or diagnose problems via these channels. The recent move to the Iridum network allows floats to spend less time transmitting data at the surface, thereby reducing the risk of becoming beached if near to shore.

Conductivity, Temperature, Depth sensor (CTD) – Also on the top of every float is a set of sensors known as a CTD. They measure temperature within an accuracy of 0.001 degrees C and pressure (closely related to depth) within 0.1 dbar, and calculate salinity using conductivity, temperature, and pressure within 0.001 psu (practical salinity units). Read more about CTDs and their uses in oceanography.

Controller – Each float is controlled by a small computer that contains a program to run the float.

Internal Reservoir – This area of the float stores oil when it is not inflating the external bladder.

Hydraulic pump – This mechanism moves oil between the internal reservoir and the external bladder to control the buoyancy of the float.

Batteries – Modern floats use lithium batteries to power the pumps, sensors, controller, and communication system. The large but finite amount of battery power available is the main limitation on a float’s operational lifetime.

External bladder – Roughly the size of a large grapefruit, this bladder is the mechanism by which floats control their buoyancy. Inflating the bladder with oil from the internal reservoir increases the volume of the float without changing the mass, thereby lowering density and causing the float to rise. Pumping oil out of the bladder back into the reservoir will increase the float’s density, allowing it to sink to a specified depth.

Efforts are now underway to make use of onboard 9-axis inertial sensors, which combine a magnetometer, gyroscope, and accelerometer, in profiling floats. When floats surface to transmit data, they are buffeted by wave action, making them a potential tool for studying sea waves. Profiling floats could be particularly useful in locations or conditions inaccessible to other in-situ observation methods, such as during a hurricane.