The International Space Station (ISS) is a working laboratory that orbits 386 kilometers (240 miles) above the Earth, and since 2000 it has been a home for a rotating, international crew of three astronauts. As a research outpost, the station is a test bed for future technologies and a research laboratory for advanced industrial materials, communications technology, medical research and much more.

ISS is the one of the most complex scientific and technological endeavors ever undertaken, involving five space agencies representing 16 nations. Once completed in 2010, the station will include contributions from the United States, Russia, Canada, Japan, Brazil, Belgium, Denmark, France, Germany, Italy, the Netherlands, Norway, Spain, Sweden, Switzerland and the United Kingdom.

Assembly began in 1998 with the launch of Zarya, and today the station provides crewmembers with 15,000 cubic feet of habitable volume--more room than a conventional three-bedroom house--and weighs 404,000 pounds. The station’s solar panels exceed the wing span of a 777 wide-body jet and harness energy from the Sun to provide electrical power to all station components and scientific experiments.

The station now includes the Russian-built Zarya Module and the Zvezda Service Module, which contain the station’s living quarters and life-support systems; the U.S.-built Unity Connecting Module, providing docking ports for several station components; the U.S.-built Destiny Laboratory, with experiment compartments that allow nearly continuous scientific research and provide additional life support and robotic capabilities; the U.S.-built Quest Airlock, a doorway to space that supports station-based spacewalks; the Canadian-built Canadarm2, a robotic arm that gives the station a movable space crane; the Russian-built Pirs docking compartment, which adds additional spacewalking and docking capabilities; and truss segments, which serve as the framework for additional station segments. Japanese and European research laboratories are ready for delivery to expand the station’s research capabilities.

Currently, ISS crews stay on orbit for six months at a time. The station provides the first laboratory complex where gravity is virtually eliminated for extended periods. The station is also vital to human exploration of space, allowing researchers to learn how to combat the physiological and psychological effects of extended stays in space. Finally, ISS serves as a test bed for new technologies and strategies for moving beyond Earth orbit.

The NASA tradition of making Earth observations from spacecraft continues on the International Space Station (ISS). Part of the station, the Destiny Laboratory has a special Earth- (and ocean-) observing window. With an orbital inclination of 51.6 degrees, station astronauts can see 75 percent of Earth’s surface and 95 percent of its human-inhabited areas. Orbits take approximately 91 to 93 minutes, with a repeat about every 3 days. 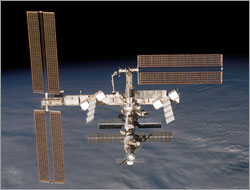 Backdropped by the blackness of space, clouds and Earth's horizon, the International Space Station is seen as it and Space Shuttle Discovery begin their relative separation on December 20, 2006. (Courtesy of NASA) 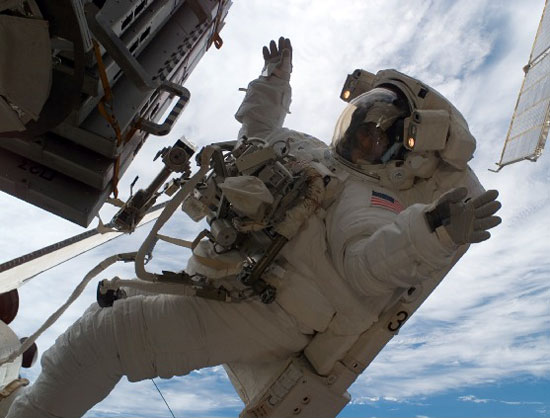 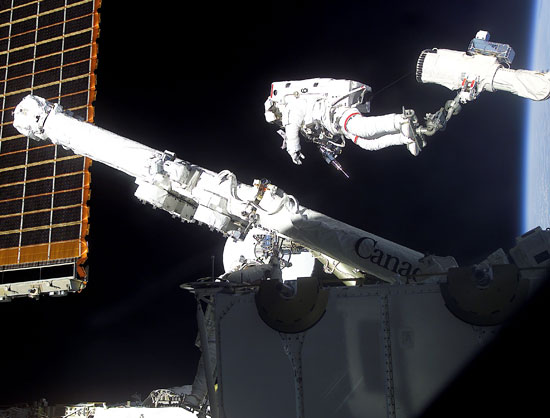 Astronaut Chris A. Hadfield, STS-100 mission specialist representing the Canadian Space Agency (CSA), stands on one Canadian-built robot arm to work with another one. Called Canadarm2, the newest addition to the International Space Station (ISS) was ferried up to the orbital outpost by the STS-100 crew. (Courtesy of NASA)