Recordings of the conversation between Tim Shank and Suni Williams (about 20 minutes long) have been posted here on the WHOI web.  Please choose your preferred viewer from the links  below to watch the video online.

Note that the audio quality is variable and sometimes difficult to understand, particularly from the Alvin submersible.  That's science and technology at work, with all of it's fits and starts and lurches forward. This was a first-time call, and we knew we would have something to learn from the communications links.

One lesson we are already learning is that it may be harder to send sound signals through 2 miles of water than it is to send radio waves through 220 miles of air. It is sometimes easier to keep in touch with a satellite or spaceship than it is to reach a ship at sea, no less a submarine.

There were four links in the virtual chain from Suni to Tim: 1) space station to Houston's Johnson Space Flight Center (by radio/satellite signals); 2) from Houston to the Iridium satellite; 3) from that telecommunications satellite to the research vessel Atlantis; and 4) from Atlantis to Alvin (acoustic signals to an underwater phone).  The challenge will be figuring out which link is weakest.

The conversation between Tim and Suni was initially broadcast on NASA TV and through the World Wide Web on January 26.  Check the NASA schedule for possible re-broadcasts or other uses of the conversation. NASA TV can be found at channel 376 on Direct TV and channel 213 on the Dish Network. It is also carried by most cable television operators, so please check your local listings.

If you have your own satellite dish, NASA Television is carried on an MPEG-2 digital signal accessed via satellite AMC-6, at 72 degrees west longitude, transponder 17C, 4040 MHz, vertical polarization. A Digital Video Broadcast (DVB)-compliant Integrated Receiver Decoder (IRD) with modulation of QPSK/DBV, data rate of 36.86 and FEC 3/4 is needed for reception. 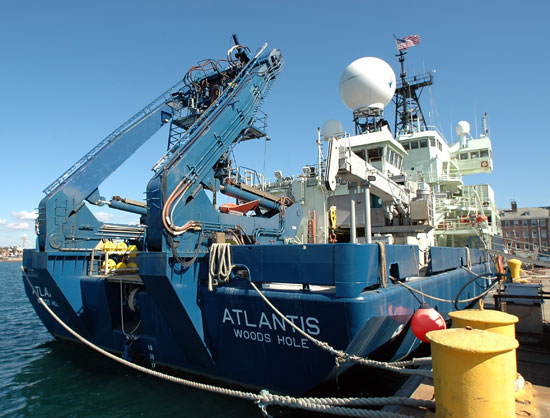