Traveling is one of the biggest perks of a career in marine science, especially traveling for field work. Field work provides a unique opportunity to see an ecosystem first-hand. It can be a chance to set aside email, to postpone meetings and to really dive into science (sometimes literally). But the actual logistics related to traveling for field work can really stink. Why? In a nutshell, it’s because scientists need to bring a lot of stuff with us when we travel. Sometimes it’s expensive, delicate and/or heavy equipment. Sometimes it’s biological samples that need special import permits. And sometimes it’s a super suspicious-looking cyrogenic container (like in the photo above).

As a molecular biologist, I typically need to collect samples with some aspect of their cellular contents intact. A common and effective way to preserve genetic material and enzymatic activity of biological samples is to freeze the heck out of them. We commonly do this using liquid nitrogen, which is -321°F. Yep, that will freeze the heck out of pretty much anything. But not everyone has liquid nitrogen laying around, so when we go to remote locations, we need to bring it with us. And once we’ve frozen the samples, we need a way to keep them really cold during transport. We do this using a special container called a dry shipper that is designed to safely transport samples in liquid nitrogen. The container has spaces to store samples and a special porous lining that absorbs liquid nitrogen, providing cooling and preventing the possibility of a spill. It’s safe to transport and does a great job of keeping samples frozen. But yeah, it looks really sketchy. If I saw one for the first time at an airport, I would be suspicious too. 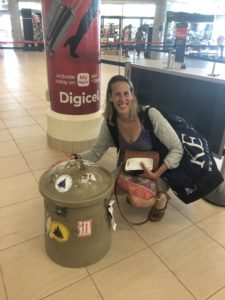 I always get a little nervous traveling with a dry shipper. It’s a hassle to deal with, so the mere fact that I have it means I’m collecting some really important samples, samples that I would be really disappointed to lose. It’s completely legal to bring on a passenger airplane, but airline employees are often unfamiliar with it. Luckily, I haven’t yet had an airline refuse to transport a dry shipper (knock wood), but I always have some explaining to do…and not just to the airline employees. The dry shipper raises eyebrows from pretty much everyone at the airport.

During my recent trips to Bermuda for our zooplankton diel vertical migration project, I’ve been inspired to use this usual cargo as an opportunity for informal outreach. Sometimes people directly ask me about it, and I’ve been able to talk to them not only about my unusual luggage but more broadly about the research we are doing. Lately I’ve decided not to wait for them to ask me. I see people in line staring at the dry shipper or overhear comments like (“what the he** is that?”) and I’ve started to jump in with an explanation. It usually leads to some questions about our work, which I’m happy to answer.

I hope these interactions contribute a tiny bit toward increasing scientific literacy and appreciation for environmental science. Maybe someday, a chance conversation like this will have a bigger ripple effect…encouraging someone to move toward a scientific career or take some action toward conservation. But even if it is an effective approach, I’m not willing to do any extra trips with the dry shipper. That darned thing is heavy!

7/28/19 Edited to add: We did in fact hit some snags getting onto the plane with our samples. The agricultural inspector wasn’t happy with some discrepancies between my authorization letter and our collection permit. Fortunately the inspectors were willing to work with us…they called our collaborators at the BIOS station and allowed them to email a new compliant authorization letter. It all worked out, but it made for a bit of nail biting during the wait.