We’ve been slowly and carefully re-opening our labs. While trying to enable social distancing and keep building density low, WHOI has smartly prioritized work by early career researchers and time-sensitive analyses. Each lab has submitted detailed plans, explaining how they are complying with these principles.

In our lab, Cory Berger has taken over Nematostella culturing duties from me. By spending a small amount of additional time in the lab, he is able to start running experiments to test how the anemones respond to conflicting daily cycles of temperature and light. 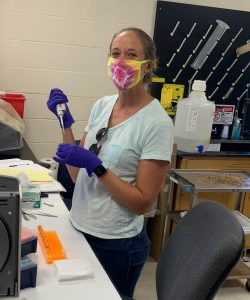 Maggie at the bench. She says she’s smiling, but it might be hard to tell…

Maggie Johnson and I have just started working on extracting RNA from a set of Acropora cervicornis coral samples that were experimentally exposed to different levels of hypoxia. This is a project that Maggie developed together with scientists at the Smithsonian Tropical Research Institution and the Smithsonian Marine Station. Maggie writes, “Hypoxia (low-oxygen) is one of the lesser-known evils associated with local and global environmental change. Depletion of oxygen resulting from warmer water temperatures and local nutrient pollution, among other factors, can have catastrophic consequences for benthic communities.” We know that coral species vary in their ability to tolerate hypoxia, but we know very little about their cellular and molecular defenses against this stressor. We are planning to conduct a type of transcriptional profiling (Tag-seq) to identify changes in gene expression following hypoxia exposure.

I’m excited to see what Maggie finds with this project, and frankly felt really good to be holding a pipette again! The extraction method we tested is a little different from my usual procedure, but we saw good yields from our first test samples and will be running the gel later this week. Fingers crossed for high quality RNA!