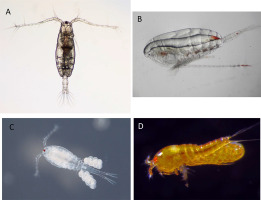 Tarrant AM, Nilsson B, and Hansen BW. 2019. Molecular physiology of copepods – from biomarkers to transcriptomes and back again. Comp. Biochem. Physiol. D: Genomics and Proteomics. 30:230-247.

I will post the “author’s manuscript” as soon as I’m allowed, and I can share the proof/pdf upon request (email atarrant “at” whoi “dot” edu if you are interested).

It was fun to put together. The idea started when I served as an external examiner for Birgitte Nilsson’s Ph.D. defense at Roskilde University in Denmark. Birgitte had done beautiful work characterizing the molecular responses of the copepod Acartia to stress and during embryonic diapause. I was struck by the large body of literature that she reviewed in her introductory and closing chapters. She compiled large tables summarizing and comparing the molecular approaches that have been used over the years to study copepod physiology. She had built tables synthesizing information about the wide variety of genes that people have studied as biomarkers, housekeeping genes, de novo transcriptome assemblies, and RNA-seq based studies of differential expression. I thought that it would be a shame for all of this work to stay buried in a dissertation, and I encouraged her to consider writing a review article. Birgitte was moving on to a job as a bioinformatician, so she and her advisor, Benni Hansen, invited me to work on this project with them.

I thought it would be pretty easy, I mean Birgitte had already done all the hard work. It turned out to take longer than I thought it would. Once you dive into the “rabbit hole” to reviewing literature, it can take a long time to wade through the references and try to wrangle them into order. It was great to work on this with Birgitte and Benni, and particularly exciting to see Birgitte’s view of the field as a newly-minted Ph.D. I was proud of the manuscript we initially submitted. But the final manuscript was greatly improved by the reviewer comments. The reviews this time were unusually thoughtful and detailed. I feel a little guilty that we made the reviewers work so hard, but I am sincerely appreciative of their efforts. The core of the manuscript was the same, but we re-arranged several sections, wrote some new passages, added references, and further developed some critical sections. We always intended to demonstrate how early “candidate gene” studies have grown into transcriptome wide studies and then come “back again” to show how transcriptomics has allowed us to better identify and understand the roles of individual biomarker genes. Our original draft fell a little short of this goal, but I am hopeful that the published version hits the mark and will be useful to the community.