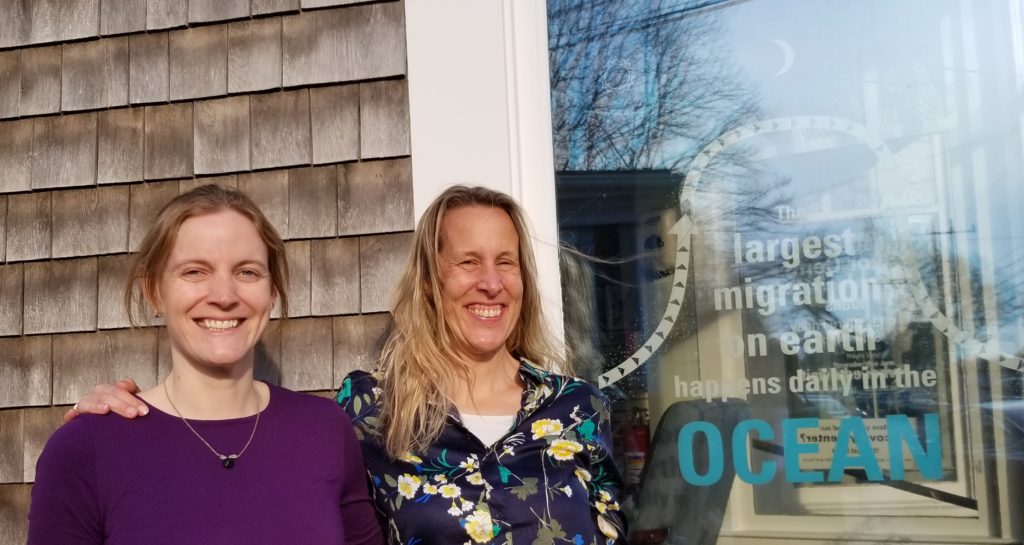 (above: Amy Maas and Ann Tarrant, PIs on the project described below, pose in front of a WHOI window with an apt message.)

I’m lucky in many ways. One that I often forget is that my daily commute only takes about 10 minutes. Not so for many American humans, and definitely not so for millions of tiny sea creatures. As I’ve mentioned in earlier posts, copepods and other migratory zooplankton move up and down in the ocean hundreds of meters every day – during night they move into shallow water to feed, and during the day they move into deep water to hide from predators. This behavioral pattern is an important fitness strategy for the migrators, but it also has important consequences for the transport of matter and energy between the surface and deep ocean waters. 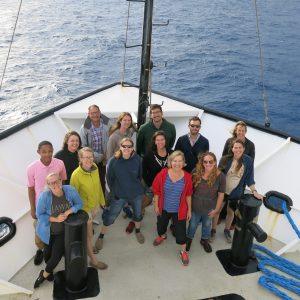 In late May we had the opportunity to participate in an NSF-funded cruise aboard the R/V Atlantic Explorer. Our goal was to sample copepods from deep and shallow waters over the course of three days, as they migrated up and down. With these specimens, we studied daily changes in their respiration rates and er…uh…. excretory activities (yep, as a biologist you get to talk about all kinds of things that don’t usually factor into polite conversation). We did this while dodging the first named tropical storm of the season, which made for some interesting time at sea. We also took samples back into the lab, where the various investigators will be conducting proteomic analysis, transcriptional profiling and enzyme activity assays. Back in Woods Hole, we have spent the past month preparing samples for sequencing and optimizing enzyme activity assays. We have two assays ready to go, and a good plan for optimizing the third. We’re itching to dig in and crank through those samples, but each sample is precious, so we need to have a very solid plan in place before starting any destructive analysis. We’re almost ready….stay tuned!