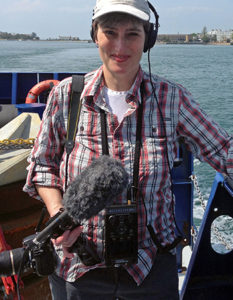 Véronique LaCapra grew up near Boston, wading in swamps, turning over rocks in tide pools, and bringing her mother home pet insects. She also wrote a lot: at first, mostly about insects. As a teenager she spent a semester on a farm in Vermont, where she learned to split logs, and a year in Paris, where she pursued interests in French punk music, surrealist art, and collecting old movie posters.

Presented with the ultimatum to “get a real job,” LaCapra decided instead to go back to school—this time at sunny U.C. Santa Barbara, an institution that bore a striking resemblance to the beach resort where she worked as a cocktail waitress. She spent two years doing fieldwork in Brazil, which let her simultaneously relive her childhood pastime of wading in swamps and earn a PhD in biogeochemistry.

She worked for almost a decade regulating pesticides at the U.S. Environmental Protection Agency in Washington, D.C., taking a year off to go to South Africa to write some more—though this time not about insects.

Ready to move on from government work, she did a brief stint freelancing for the Voice of America, then segued into public radio. In her six years as the science reporter at the NPR station in St. Louis, she got to interview a surgeon during a double-transplant operation, explore the underground tunnels of the city’s sewer system, touch two endangered species, and occasionally hear her own voice on the national airwaves. In 2016, she willingly gave all that up to come to Woods Hole Oceanographic Institution, where she tells stories about the wonders of ocean science and avoids getting seasick.