My research primarily revolves around one question, “what is the role of the ocean in climate?” More specifically, my research focuses on the variability in the ocean and atmosphere, and the interaction between the two in the extra-tropics on time scales of a few years to several decades. Two main tools that I use to investigate the dynamics of decadal climate variability and the role of the extra-tropical ocean-atmosphere interaction are observations archived over the last 100+ years and global climate models, such as the models used for the reports from the Intergovernmental Panel on Climate Change.

I am trained as a large-scale physical oceanographer through my graduate studies at the University of Washington and Seoul National University, where I investigated the large-scale circulation and water mass variability of the Subtropical North Atlantic and the East Sea, respectively, based on various state-of-the-art and historical observational data. Then I made a change in my research topic and studied atmosphere-ocean coupled decadal variability in the North Pacific using a global climate model for my postdoctoral research at the National Center for Atmospheric Research. Since I arrived at the Wood Hole Oceanographic Institution, my research topics have been bridging the two worlds, the ocean and atmosphere (or oceanography and atmospheric science) as well as observational data and climate models. 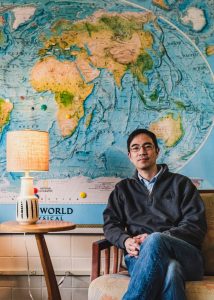