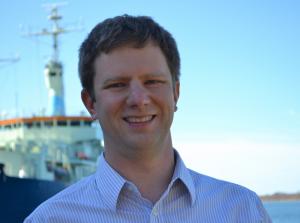 Welcome!  I work at the intersection of robotics and earth sciences researching and developing new methods for investigating the Earth's oceans with robotic technologies.  The core of my research is navigation, control, and field robotics.  Here, you can explore my research, education, and outreach activites and learn more about my field work.  Feel free to contact me for more information.

--- March 2016: Liam Paull (MIT), Jeff Walls (Univ of Michigan), and I are organizing a workshop at ICRA 2016 on Marine Robot Localization and Navigation.  Poster abstracts are due on May 1!

--- May 2015: Jordan Stanway's article on rotor identification in geometric algebra has been accepted in the Journal of Field Robotics.

--- January 2015: Two papers have been accepted for the 2015 IEEE ICRA conference --- one on ADCP aided navigation methods and a second on under-ice navigation.  Congratulations to all involved!

--- September 2014: Jon Howland, Qingjun Yang, and I published a manuscript on nonlinear observers for underwater robot navigation in the IEEE Transactions on Control Systems Technologies.

--- August 2014: I was the Prinicpal Investigator on an expedition with the Sentry AUV to (1) measure heat flux at the ASHES and Main Endeavour Hydrothemal Vent Fields and (2) validate new ADCP aided navigation methods.  Data analysis is on-going.  This work was funded by the National Science Foundation and the Air Force Research Laboratories.

--- July 2014: Stefano Suman, an engineer in my group, along with colleagues at WHOI and The Johns Hopkins University, participated in the first under-ice sea trials of the Nereid Under-Ice Robot (NUI).

--- June 2014: I participated in the 2014 Japanese-American Frontiers of Engineering (JAFOE) --- an invitation-only meeting of early career engineers in Japan and the USA hosted by the U.S. and Japanese Academies of Engineering.