We embarked on three major cruises to the East Pacific rise as part of the LADDER project.  Each expedition was aboard the R/V Atlantis, and used the deep submersible Alvin, as well as a variety of other seagoing instruments.  On the LADDER-1 cruise, led by Chief Scientist Andreas Thurnherr, we deployed an extensive array of moorings with current meters and sediment traps, and initiated a tracer-release experiment.  On LADDER-2 (Ch. Sci. Jim Ledwell), we surveyed the water column to track the tracer and recovered a bottom mounted acoustic Doppler current meter.  On LADDER-3 (Ch. Sci. Lauren Mullineaux), we recovered the remaining current meters and sediment traps.  In addition, we surveyed the water column on each cruise with an instrument package consisting of a lowered ADCP, a CTD and a rosette of water bottles.  Biological studies on each cruise involved the Alvin, autonomous water samplers, and sediment traps to sample larval and newly settled juvenile stages of vent species.  These activities and associated studies by collaborators are summarized in the reports for each cruise.

On LADDER-3 we maintained a cruise web site. 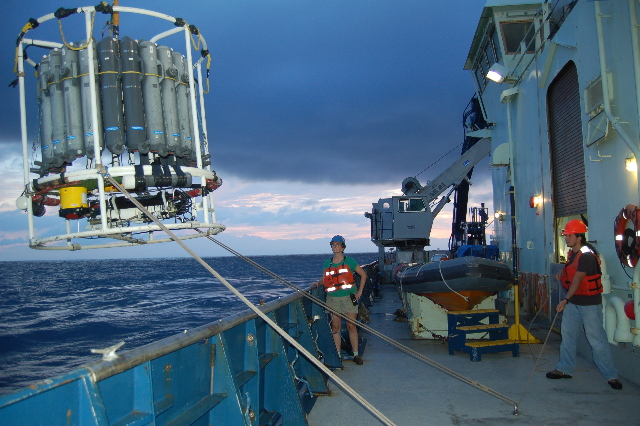