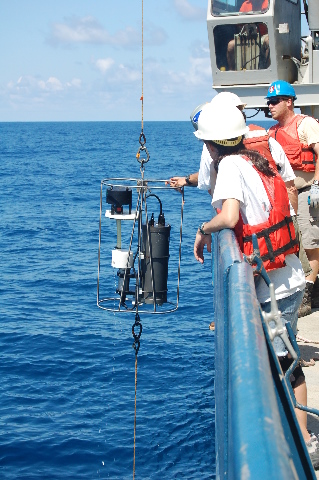 We used high-volume water samplers (McLane WTS-LV)  to collect larvae of vent species and other plankton near the ridge.  The samplers were equipped with 50-L pump heads, and 63 mm mesh filters.  Pumps were deployed on pairs of moorings during LADDER-1 and LADDER-2 cruises.  On LADDER-1, one mooring of each pair was located within the axial trough near an active, colonized vent and the other roughly 100 m off axis to the east.  On LADDER-2, the second mooring was located within the axial trough, but at least 100 m away from active vents.  On each mooring, the lower pump was positioned at 3 m above bottom (mab), and the upper pump at 75 mab, roughly the height of the neutrally buoyant plume (except at K vent where the plume was higher, and the upper pump positioned at 139 mab).  The pumps typically sampled for 24 hrs, resulting in sample volumes of ~40,000 L.

Fig. 2. Larval vertical distributions, December 2006 Abundance (ln transformed) of vent larvae in 40,000-L pump samples near seafloor (SF) and in neutrally buoyant plume (PL) at 3 vent sites (ON): Riftia Field, K Vent, and Tica, and at nearby sites 100 m away along the axis (AWAY) Plots of individual species: (page 1) (page 2) (page 3)