Following sea trials in 2007, the long core system on RV Knorr began scientific operations in 2009 with two cruises to the equatorial Pacific and followed in 2010 with four cruises in the equatorial and North Atlantic. KNR195-3 (D’Hondt Chief Scientist) followed an equato-rial Pacific track line from Costa Rica to Hawaii and re-covered nineteen piston cores ranging in length from 18 to 41 m. KNR195-5 (Herbert Chief Scientist) cored near the Galapagos, on the Peru margin and near the Carnegie Ridge, recovering nine piston cores ranging in length from 8 to nearly 43 m. KNR197-3 (Oppo/Curry Co-chief Scientists) cored along the northern slope of Demerara Rise in water depths ranging from 550 m to 3100 m and recovered twelve piston cores in lengths from 25 to 32 m. KNR197-4 (Baker Chief Scientist) recovered nine cores in lengths ranging from 24 to 32 m from the Amazon Fan and nearby equatorial Atlantic. KNR197-10 and KNR198-1 (Keigwin Chief Scientist for both) operated near the Mid Atlantic Ridge east of the Azores, the Grand Banks and along the slope SE of New England. Seventeen piston cores were recovered ranging in length from 24 to 39 m.In total (including the sea trials cruise) sixty seven piston cores have been recovered. Of these, three were greater than 40 m in length, fifteen were between 35 and 40 m, thirteen were between 30 and 35 m, twenty eight were between 25 and 30 m, and eight were shorter than 25 m. The longest cores recovered were in Pacific Ocean oozes far from the continents and in sedimentary drift deposits at the Bermuda Rise and Corner Rise in the Atlantic Ocean. Nearer to the continents, core lengths were 25 to 32 m, limited for the most part by poorer core penetration into the coarse-grained continental margin sediments. One long core was lost during operations because of a water column trip which parted a pendant connecting the release system with the core. The core recoveries are comparable to core lengths of the original Giant Piston Core on Knorr in the 1970s (Hollister et al., 1973), shorter than the longest Calypso cores recovered by the Marion Dufresne, but comparable to the typical recovery for the Calypso core (~30 to 40 m). The Knorr piston core recoveries are about two to three times longer than standard UNOLS piston coring systems and thus represent a significant enhancement to coring capabilities for US research. 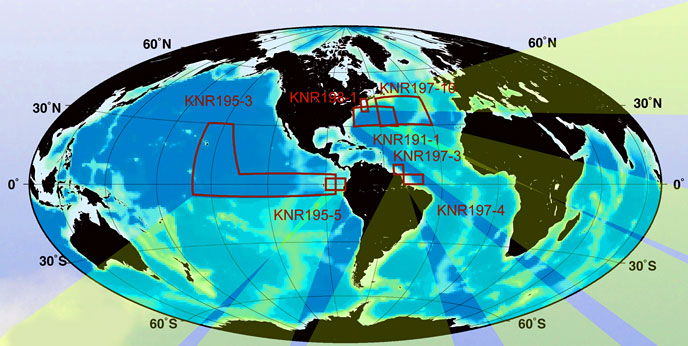