The sea trials for the new long core system took place August 28 to September 14 on RV Knorr, which included ten days of field work on Bermuda Rise and New Jersey margin (See cruise track). These locations were chosen because they had been previously cored by the Ocean Drilling Program Advanced Piston Core and the Marion Dufresne Calypso core. In addition, Bermuda Rise was one of the original sites where Charlie Hollister successfully deployed the original Giant Piston Core in the 1970s.

The cruise plan included at individual tests of all of the major components of the coring system, including the winches, A-frame, starboard side handling system and the core itself. After about three days of testing, the first full deployments of the system began, During the first deployment, the release system failed to drop the piston core.  The next eight deployments were successful (see coring results). Seven deployments at Bermuda Rise recovered successively longer cores from 26 to 38 meters in length. One deployment at New Jersey margin recovered 24 meters. Core recovery was typically more than 80% of the barrel length. While at Bermuda rise, the bottom sensing components (an acoustic altimeter and and bottom-sensing drop weight) failed. As a result two of the seven Bermuda Rise cores over penetrated - the core barrel entered the sediments before the piston began its upward movement in the core barrel.

The quality of the cores is excellent (See core performance). There is no evidence of stretching in the upper sections of the cores.Some evidence of compression occurred below 28 meters in three of the long cores, perhaps an indication that the piston had reached the top of the core, in which case the core would begin to act like a gravity core. Embedded accelerometers in the release system and the piston core head recorded the movements of these components during the coring operation. These data show that, on release, the upward displacement of the release system is very small (2 meters or less) and that it takes approximately 5 seconds for a 140 feet (42.7 meters) core to fully penetrate the sediments at Bermuda Rise. The small upward movement of the release system implies that stretching of the Plasma-Vectran rope is minimal and that sediment stretching is minimal. 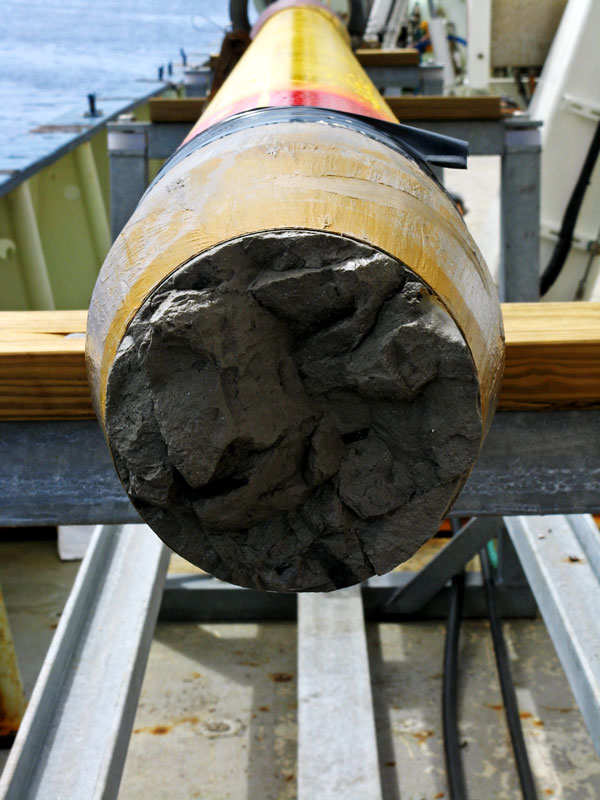