FT-ICR Mass Spectrometer
The cornerstone of the facility is a 7 T Fourier-transform ion cyclotron resonance mass spectrometer (FT-ICR MS) from Thermo Scientific. The front-end of the instrument is a combined quadrupole - linear ion trap mass spectrometer (LTQ MS) which can be operated as a stand-alone instrument or it can serve as the ion accumulation site for further high resolution analysis in the FT-ICR MS. The nominal mass range for the instrument is 50-2000 m/z; though in practice, only a portion of this mass range is analyzed at any one time. The FT-ICR MS provides ultrahigh resolution and high mass accuracy for ions within complex samples, i.e., <1 ppm mass accuracy or + 0.0001 Da at 400 Da. A liquid chromatography interface, UV-Vis detector, versatile atmospheric ionization sources, and multiple MS fragmentation options (see below) provide optimum flexibility in the characterization of a broad range of environmental samples. 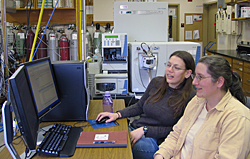 LTQ Mass Spectrometer
A second, stand-alone LTQ MS is available for method development and sample screening. This mass spectrometer is identical to the front end of the FT-ICR MS described above (including LC instrumentation and UV-Vis detector), and methods developed on the LTQ MS are fully transferable to the FT-ICR MS for further studies where ultra-high resolution data are needed. All ionization sources and software applications described below can be used with the LTQ mass spectrometer. Structural characterization is possible through fragmentation by collision induced dissociation (CID) of selected compounds after MS analysis (i.e. MS/MS).

Ionization Sources
Four different ionization sources are available for the FT-ICR MS and the LTQ MS: micro- and nano-electrospray ionization (ESI), atmospheric pressure chemical ionization (APCI) and matrix-assisted laser desorption ionization (MALDI). The micro-ESI source is used for direct infusion of sample and for introduction of HPLC effluent. Nano-ESI is ideal for small sample quantities and low-flow HPLC effluents. These low flow rates have been shown to enhance separation in complex mixtures and reduce solvent introduction into the mass spectrometer. The nano-ESI probe has two components - a static nano-spray probe for small samples with no HPLC pre-separation and a dynamic nano-spray probe for samples that require HPLC pre-separation. Both the micro-ESI and nano-ESI sources can be used to examine polar macromolecules, such as specific components of organic matter or protein samples. The APCI source can be used for those studies that require analysis of semi-volatile compounds such as petroleum products. The atmospheric-pressure MALDI source can be used for analysis of large non-volatile macromolecules.

NanoMate Ionization Source
An additional ionization system is available for analysis on the FT-ICR MS.  The TriVersa NanoMate™ from Advion Biosystems, Inc. acts as both a nanospray ionization source and a fraction collector. Samples can be introduced into the mass spectrometer directly from a 96-well plate in the NanoMate. Alternatively, samples can be separated with liquid chromatography and the effluent is split between the ionization source and the fraction collector. This allows repeat analysis of chromatographic fractions by direct nanospray infusion into the FT-ICR MS.

Data Analysis
Software for generating elemental formulas for natural organic matter samples has been developed by E. Kujawinski and is available for samples run at the Facility. BioWorks™ is a program that enables efficient searching of protein databases. This is used primarily for enzymatic digests of proteins or protein extracts but can be used for intact protein spectra as well. Mass Frontier™ predicts fragmentation spectra for proposed compound structures. A stand-alone workstation is available for examination and analysis of previously acquired mass spectra. The software packages described above are present on the workstation, in addition to Microsoft Office, Adobe Creative Suite, and Matlab™. The hard drive of the workstation is backed up nightly. We have also significantly expanded our data storage capacity with a 12 TB, RAID 5 Snap Server.