Microbial Ecology and Physiology Laboratory
Research in the Sievert group is aimed at elucidating the composition, diversity, and function of microbial communities, with the objective of understanding the relationship between microorganisms and their role in the ocean biogeochemical cycles. We are particularly interested in environments where chemolithoautrophic processes are important, such as deep-sea hydrothermal vents, oxygen minimum zones, and sulfidic marine sediments. Chemolithoautotrophs – i.e., organisms that acquire energy from the oxidation of inorganic compounds and that use inorganic carbon as the source for cell carbon – play critical roles in these and other ecosystems and are likely to have been among the first types of organisms on Earth. Today vestiges of this early life can still be found at extreme environments, such as deep-sea hydrothermal vents, where chemolithoautrophic microorganisms form the base of the food chain. A variety of approaches that integrate cultivation-dependent and cultivation-independent techniques are being used to help unravel the governing forces behind the patterns of microbial species distribution. 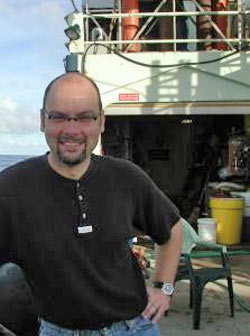