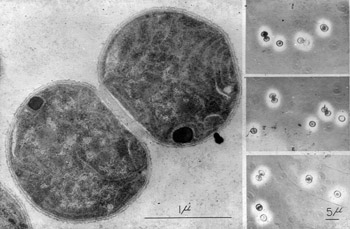 Microbial life in the oceans is extremely diverse and is responsible for processes that are essential to the maintenance of our biosphere. Yet, we have only a fragmentary understanding of the diversity and the function of microorganisms in this vast habitat. To study the physiology and ecology of microorganisms in various oceanic environments, researchers at WHOI utilize a multitude of approaches, including cultivation-dependent and cultivation-independent techniques, which aim at linking the identity of these microbes with their function. The last few years have witnessed the discovery of new marine microbes with some times unexpected metabolic functions, challenging our basic concepts of biogeochemical cycles and energy flow in the sea. It is clear that many exciting discoveries await us in this area and researchers at WHOI are well positioned to play a major role in these efforts. 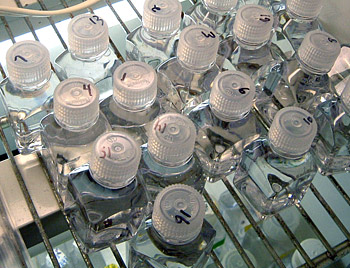 Marine microbial processes are complex, diverse, and collectively define the role of the sea within the global climate system. Our research strives to enhance the understanding of the chemical and biological controls on some of these key processes. We approach this research on a variety of scales from deciphering microbial metabolic pathways, to tracing the impact of microbial metabolisms on ocean chemistry, to modeling the impact of ocean chemistry on global climate. Our group provides insights on microbial processes that necessary to predict the response of marine microbes, and, thus, the sea to environmental change. 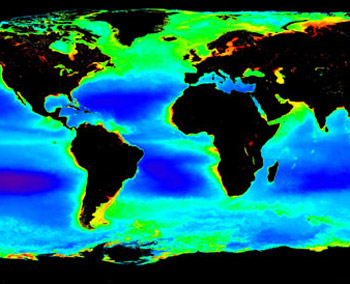 Microbes are small in size, but they have a big effect on how carbon, oxygen, nitrogen, phosphorus and a host of other elements (sulfur, silicon, mercury, cobalt, and iron) cycle around the globe. Marine microbes are responsible for about half the total photosynthesis of the entire planet. Some are able to convert atmospheric nitrogen from an inert gas into the organic nutrients that fuel marine ecosystems, while others produce volatile sulfur compounds that seed the formation of rain clouds. Human activity is affecting the quality of our environment, and even the climate of the planet itself. If we are to understand the ocean’s response to climate change and human perturbations to the Earth system, we need to first understand the ocean’s role in global biogeochemical cycles. Research within the Microbial Biogeochemistry group at WHOI includes the cycling of each of the major nutrients in the sea, as well as important trace elements and contaminants. We are interested in what effect the distribution of these elements plays in limiting ocean production and, in turn, what role microbial communities play in the distribution, oxidation state, and speciation of essential nutrients. The combined expertise within the Microbial Biogeochemistry group allows us to examine the cross-disciplinary links between the cycles of different elements, including the concepts of co-limitation and the feedbacks between the ocean biosphere and global climate through production and consumption of climatically important gases, such as carbon dioxide (CO2), nitrous oxide (N2O), and dimethyl sulfide. We aim to provide a mechanistic link between global biogeochemical cycles and the underlying microbial community structure. Our studies are also designed to give a global perspective of microbial systems that can be mathematically modeled so we can look ahead and understand the likely impacts of human activities on the oceans and climate. 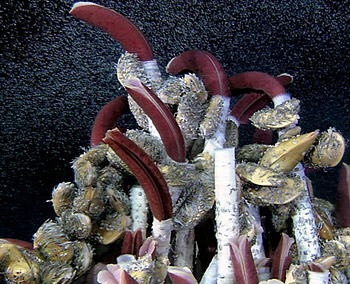 Co-Evolution of Life and Biogeochemical Cycles

Life and the biogeochemical cycling of elements have co-evolved on Earth over billions of years.  The environment- temperature, minerals, light, atmospheric gases, have shaped the diversity of microbes that inhabit our planet.  Microbes in turn affect erosion, climate patterns, global temperature, and other geological processes. Clearly there is a strong influence of life on biogeochemical cycles and vice versa, which we refer to as the co-evolution of life and biogeochemical cycles. Microorganisms, with their diverse biochemical repertoire, are central to this co-evolution, beginning with the microbial origin of life and the early Earth.  For example, the evolution of oxygen-producing photosynthesis dramatically changed the composition of the atmosphere, the types of minerals that are present at the Earth’s surface, the speed at which chemical weathering of the continents occurs, and perhaps most importantly, the types and forms of organisms that have subsequently evolved.  The marine environment is believed to be central to early life, in extreme locations such as hydrothermal vents and cyanobacterial mats, but also in more benign places such as the upper water column of the oceans. Key biogeochemical cycles are often studied in relation to deep time and co-evolution, including the cycles of sulfur, nitrogen, oxygen, carbon, and trace metals such as iron, cobalt, and zinc. At WHOI, numerous researchers are studying microbial and biogeochemical aspects of the evolution of life and its co-evolution with biogeochemical cycles throughout Earth history.