Marine microorganisms are essential to the maintenance of our biosphere, yet we have only a fragmentary understanding of the diversity and function of microbial life in the oceans. The Microbial Ecology & Physiology Lab studies the composition, diversity, and function of microbial communities, with the objective of understanding the relationship between microorganisms and their role in the ocean biogeochemical cycles. A better understanding of the interactions between the biosphere and geosphere is key to elucidating the role of microbes in the environment, and we contribute to this understanding with our research. The ocean contains a vast array of microbes whose metabolism and physiology remain largely unknown due to a lack of cultivated representatives. This is particularly true for the 'dark ocean', i.e., the parts of the ocean beyond the thin veneer where phototrophic processes dominate.

To this end, the Microbial Ecology & Physiology Lab is undertaking analyses of microbial communities that integrate cultivation-dependent and cultivation-independent techniques, and is pursuing approaches beyond the mere description of microbial diversity to help unravel the governing forces behind the patterns of microbial species distribution. Special interests include the microbial ecology of hydrothermal vents, including the subseafloor biosphere, microorganisms involved in sulfur cycling, as well as the evolution and ecology of autotrophic carbon fixation pathways other than the Calvin-Benson-Bassham cycle. These so-called alternative carbon fixation pathways are now recognized to be of much greater importance than previously thought (see also Hügler & Sievert, 2011).

Focus on Autotrophic Microbes in Subseafloor at Deep-Sea Vents

For example, we are currently utilizing molecular biological tools with concomitant analysis of lipids and their stable isotopic compositions as well as microscopic identification of environmental samples and activity measurements to provide a comprehensive assessment of the importance of sulfur oxidation in the subsurface at deep-sea vents. We are attempting to assess the potential importance of carbon fixation pathways other than the Calvin-Benson-Bassham (CBB) cycle for the productivity of this ecosystem. Our present knowledge of organisms responsible for inorganic carbon fixation at hydrothermal vents is inadequate, despite the fact that these organisms form the basis of these ecosystems. Given the prevalence of Campylobacteria (formerly known as Epsilonproteobacteria) at hydrothermal systems, and the fact that cultivated representatives are autotrophic, it is likely that these organisms contribute significantly to primary organic matter production at hydrothermal vents. These and other autotrophic microbes at vents are using the reductive tricarboxylic acid (TCA) cycle for autotrophic carbon fixation, suggesting that this cycle might be more significant for carbon production at hydrothermal vents than previously thought. Thus, a picture begins to emerge questioning the paradigm of the CBB cycle being at the base of the food web of deep-sea hydrothermal vents.

The discovery of deep-sea hot springs at the Galapagos Spreading Center in 1977 forever changed our perception of life on Earth. It was the first ecosystem to be identified where chemoautotophy is the predominant form of organic carbon production, triggering a series of groundbreaking discoveries over the last forty years. Yet, up to this point we still lack a quantitative assessment of the amount of carbon being produced at deep-sea hot springs, in particular in the sub-seafloor portion of these systems. In a paper published at Proceedings of the National Academy of Sciences of the USA, we describe the results of innovative experiments, which have allowed us to address questions that have so far remained unanswered by directly quantifying the efficiency of natural chemosynthetic microbial communities and to derive empirical constrains on the primary productivity, standing stock, and turnover time of the sub-seafloor biosphere at deep-sea hot-springs. Please read the WHOI news release here.

In April/May 2017, we went on the Dark Life II expedition to study life on and below the seafloor at the deep-sea hydrothermal vents at 9oN on the East Pacific Rise using the deep-sea submersible Alvin on R/V Atlantis. The focus was on using a newly developed seafloor micro-laboratory, named the Vent-SID, to measure chemoautotrophic production at deep-sea vents directly at the seafloor under in situ conditions. The research is funded by the National Science Foundation, and it represents a collaboration among scientists from different research institutions around the world. Please feel free to check out also our previous expeditions in 2014, Dark Life I, and WHOI's Dive & Discover Expedition 15.

Hydrothermalism in coastal sediments strongly impacts biogeochemical processes and supports chemoautotrophy. Yet, the effects of fluid flow on microbial community composition and rates of chemoautotrophic production is unknown because rate measurements under natural conditions are difficult, impeding an assessment of the importance of these systems. In a paper published in Communications Earth & Environment, a Nature Portfolio journal, we describe the use of a novel in situ incubation approach controlling fluid flow to assess the importance of hydrothermal fluid circulation on chemoautotrophic production at the shallow-water hydrothermal system in Paliochori Bay (Milos, Greece). Based on injected 13C-labelled dissolved inorganic carbon and its incorporation into fatty acids, we constrained carbon fixation to be as high as 12 µmol C cm-3 d-1, corresponding to areal rates up to 10-times higher than previously reported for coastal sediments, and showed the importance of fluid flow for supplying the necessary substrates to support chemoautotrophy. Without flow, rates were substantially lower and microbial community composition markedly shifted. Our results highlight the importance of fluid flow in shaping the composition and activity of microbial communities of shallow-water hydrothermal vents, identifying them as hotspots of microbial productivity. Please read the WHOI news release here. 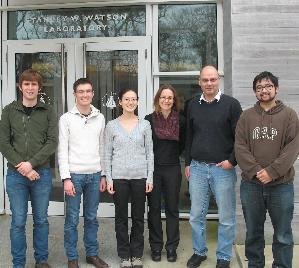 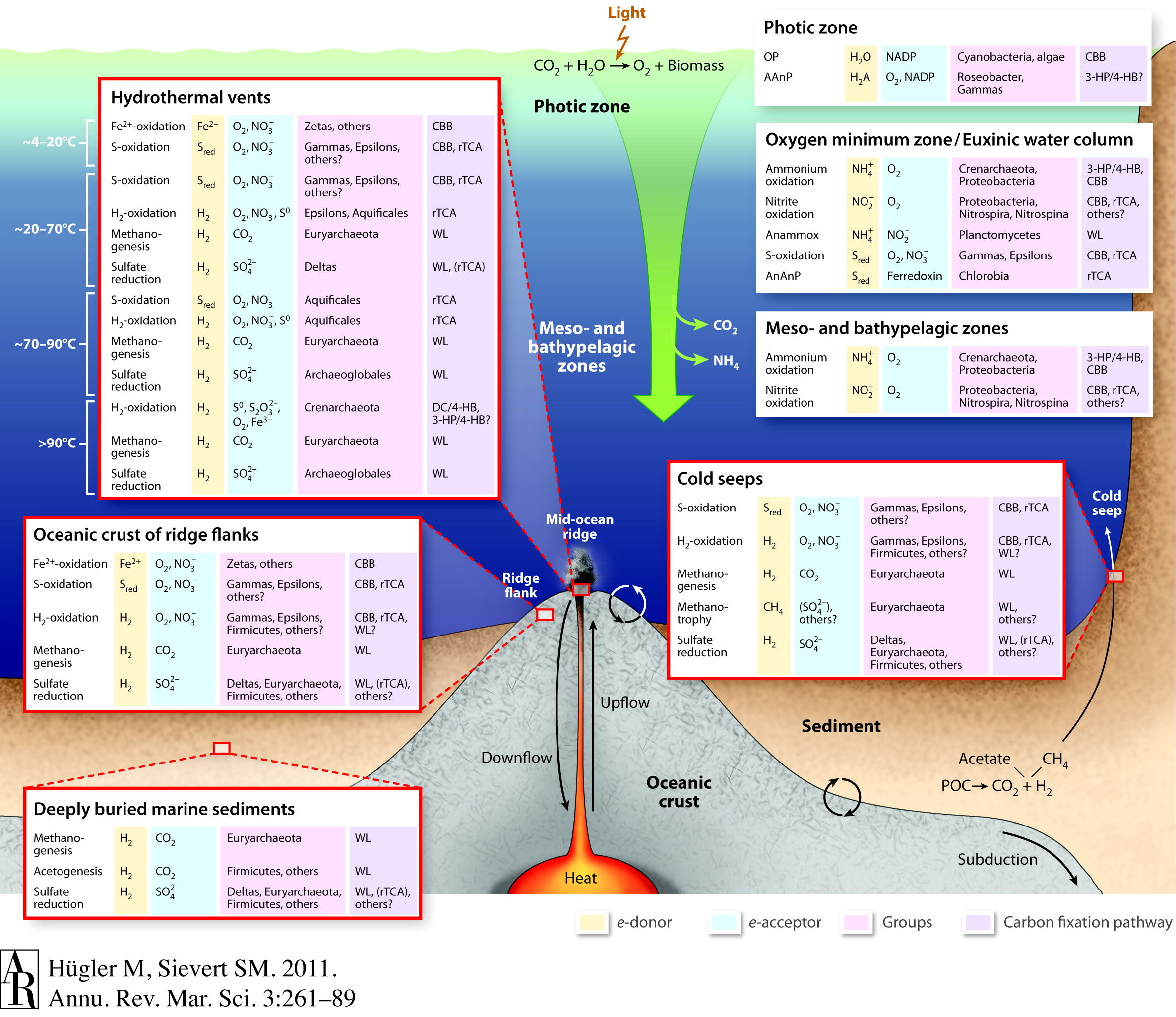 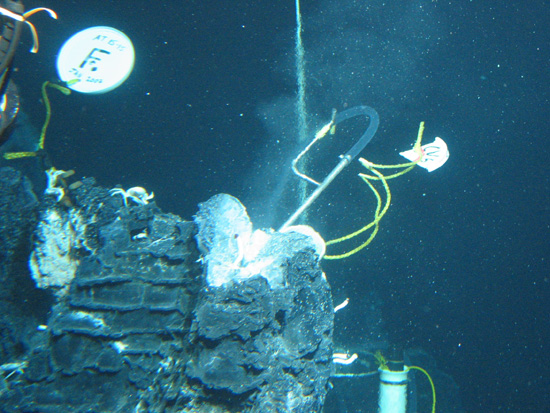 Sampling of hydrothermal fluids at 'Crab Spa' in 2007, one year after a volcanic eruption. (Gavin Eppard, WHOI) 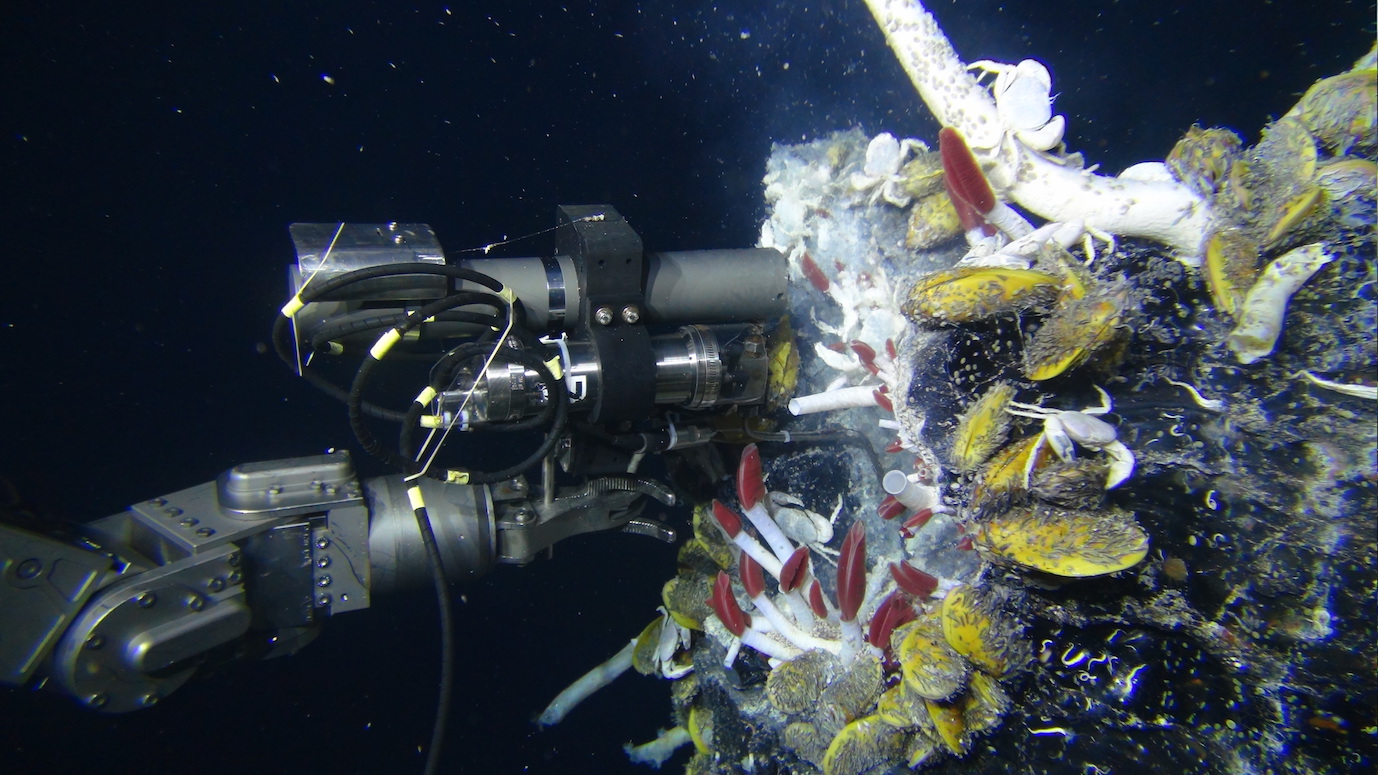 Sampling of vent fluids at the deep-sea hydrothermal vent Crab Spa in 2014 on the East Pacific Rise at 2,500 m water depth using a so-called isobaric gastight sampler (IGT), a device that can retain the in situ pressure of the fluids upon recovery to the surface. 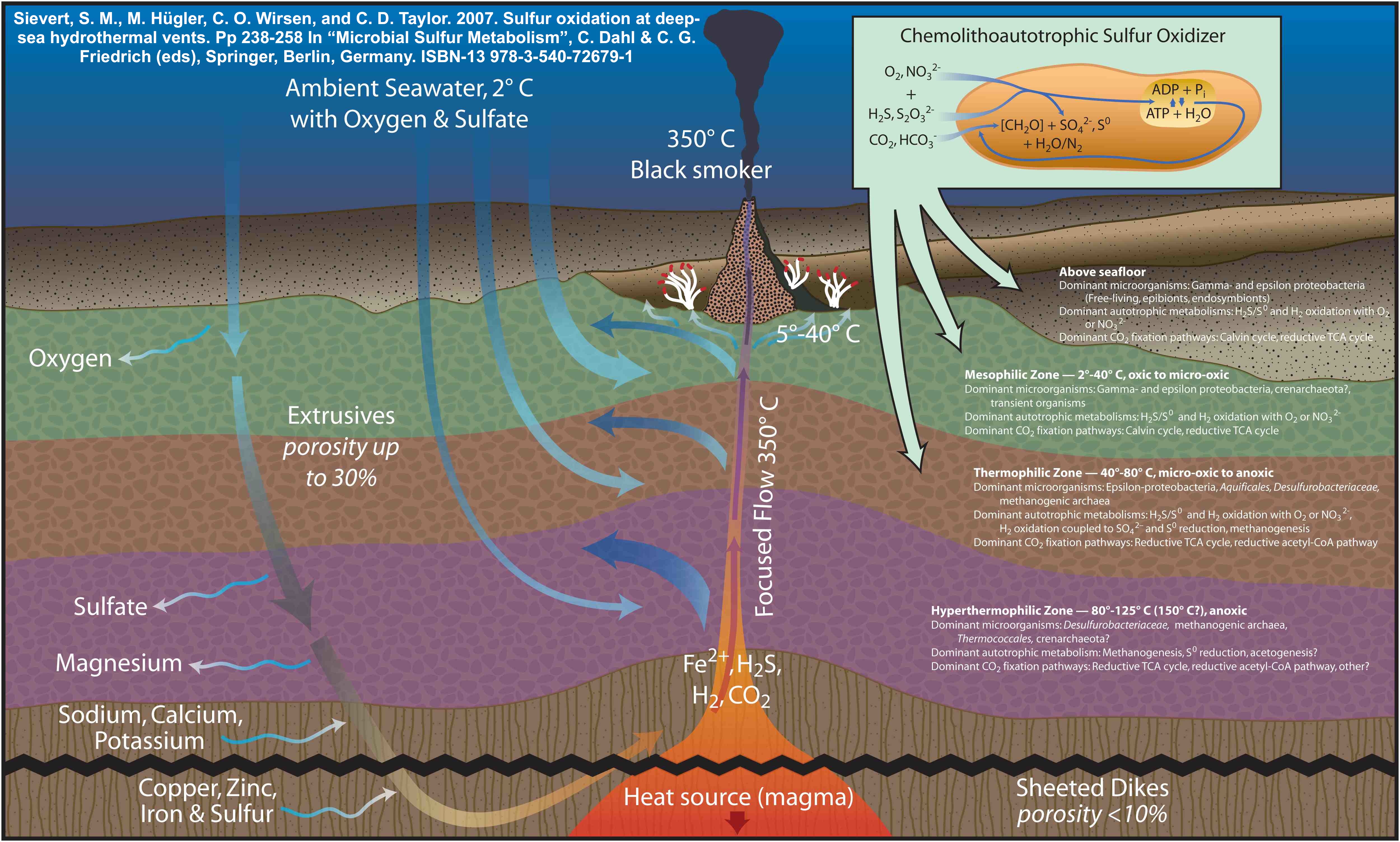 » The Discovery of Hydrothermal Vents

» An Integrated Study of Chemosynthesis at Deep-Sea Vents
Funded by the National Science Foundation’s Dimensions of Biodiversity research program.
Information on currently funded grants in this program can be found here:http://www.nsf.gov/pubs/2012/nsf12053/nsf12053.pdf

» "Deep-sea Tubeworms Get Versatile 'Inside' Help"
from Oceanus magazine

» Settling on the Seafloor

» Is Life Thriving Deep Beneath the Seafloor?