Microbiology and Biogeochemistry of Autotrophic Microbes in the Subsurface at Hydrothermal Vents: Filamentous-Sulfur Producing Bacteria

The recent discovery of microbial populations beneath the deep ocean floor has far reaching implications in biology and has a potentially strong influence on a variety of biogeochemical processes. Presently, the subseafloor biosphere is a poorly defined component of hydrothermal systems; we need better constraints on the nature and extent of this ecosystem and its contribution to primary production at hydrothermal vents. Hydrothermal fluid flowing through cracks and pores within the oceanic crust provides a potentially rich environment for subseafloor biological communities. Indeed, several recently published observations of “microbial eruptions” point to the existence of a subseafloor biosphere that might contribute considerably to the productivity of these hydrothermal systems: Extensive discharges from so-called ”blizzard” or ”snowblower” vents (e.g.,9N East pacific Rise) released large amounts of white flocculent material which accumulated into mats of 5 cm thickness. This material has since been identified as filamentous sulfur produced by novel microbes of the genus Arcobacter that are under investigation in our laboratory. In this study, we will pursue an integrated microbiological and geochemical study of the abundance, distribution, and diversity of these filamentous-S producing microbes, and assessment their ecological role at 9˚N EPR. Previous observations and the high likelihood for observing eruptive events with output of subsurface biomass mean that this site is perfectly suited to address these questions. Our studies are designed to test the following general hypotheses:

1) The prime habitat of filamentous-S-forming microbes is the shallow subsurface, i.e., the part of the subsurface that is characterized by the active mixing of hydrothermal fluid with seawater, and snowblower vents represent a snapshot sample of that persistent biosphere.

2) A significant portion of CO2-fixation in the subsurface is carried out by epsilon proteobacteria related to Candidatus Arcobacter sulfidicus, which has significant implications for primary production estimates and interpretation of stable carbon isotope measurements.

3) The formation of filamentous-S produces a distinctive geochemical signature (biomarker, isotope) that is deposited and may eventually become part of the geological record.

Samples will be taken from various vent habitats with a new device for uncontaminated in situ microbial sampling. In addition, we will deploy and recover devices that provide new surfaces for quantifying in situ colonization by microbes, and will implement shipboard culturing for assessment of function. We will use molecular biological methods to assess the composition of the microbial community and the influence of selected environmental conditions on microbial diversity. Stable isotope probing and radiotracer studies will be used to identify autotrophic subseafloor microorganisms and to measure their rates of CO2-fixation. At the same time, the microbial community composition will be analyzed via lipid biomarkers, providing an independent assessment of the diversity and relative abundances of microbes in this system. Stable isotope ratios of bulk organic carbon, specific lipid biomarkers and dissolved inorganic carbon will provide information on the carbon-fixation physiologies employed by specific types of vent microbes and the transfer of carbon within the system.
__________________________
This project was funded by NSF Biological Oceanography and it formed the basis for the work now continuing as part of the NSF Dimensions of Biodiversity program. 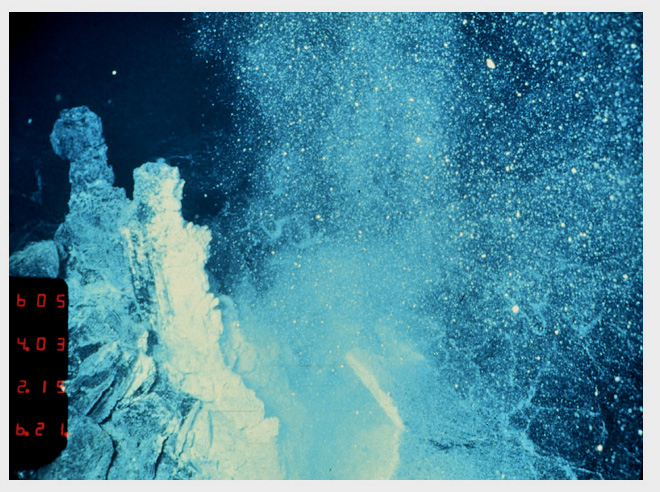 Flocculent discharges comprised of filamentous sulfur and associated microbes, and referred to as "snowblower vents", have now been documented at several deep sea hydrothermal vent sites. Pictured above (photo courtesy of Dr. D. Fornari, WHOI) are emissions occurring during the 1991 volcanic eruption along the East Pacific Rise at the 9N vent site when this type of intense discharge from the vent subsurface was first documented. 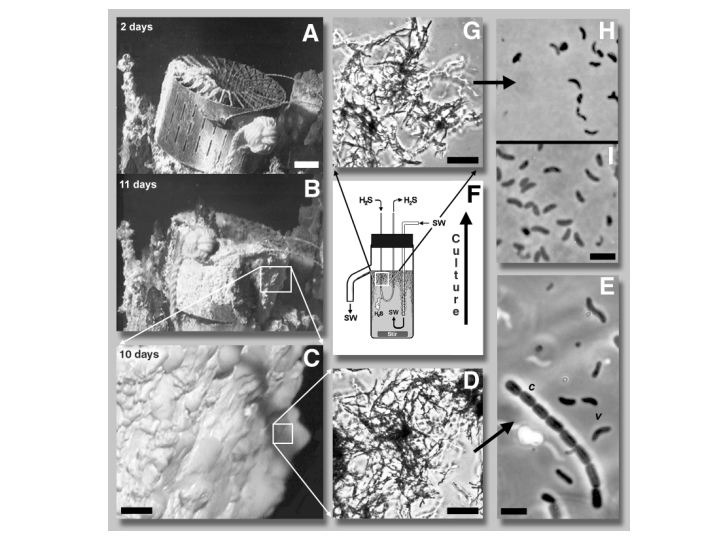 Rapid and voluminous in situ formation of microbial filamentous sulfur can occur at hydrothermal vents. When a titanium container was placed within the active warm water flow (20-40C) at M vent at 9N EPR during a cruise in Dec, 1997 a mat accumulated on the titanium surfaces to a thickness of ≈ 0.5 cm in two days and up to 3 cm by 10 to 11 days (A to C). Phase photomicrograph of filamentous sulfur mat produced in situ and associated microorganisms (D and E; v = vibrio; c = chain of rod-shaped organisms). Sulfur filament forming microbes from hydrothermal vent inocula were successfully grown in shipboard continuous culture (F). Filamentous sulfur produced in these shipboard reactors was identical to that produced in situ (G). Fixation of CO2 (20.5 nmolC fixed ml-1 hr-1) by shipboard reactor samples was commensurate with reactor samples of the coastal strain (17.4 +/- 9.6 nmolC fixed ml-1 hr-1) indicating the two populations are similarly autotrophic. (H) Microorganisms from shipboard laboratory reactor. (I) Coastal sulfur-filament-producing microorganism.