Abstract
Chemoautotrophic bacterial genomes will be a panacea for environmental and evolutionary microbiologists. In particular, the sulfur oxidizing chemoautotrophs, which fix CO2 in the many habitats where reduced sulfur compounds coexist with inorganic oxidants, have a great deal of potential applications in the energy industry. By virtue of their phylogenetic and physiological diversity, they are capable of transforming a variety of redox-sensitive substrates under chemically and physically harsh conditions - a veritable boon for industrial applications. Relevant to fossil fuel production, they are capable of desulfurylating coal and removing sour gas (H2S) from petroleum. Given their prospective applications in the energy industry as well as the advances they will provide to our understanding of CO2fixation in contemporary and ancient habitats on this planet and others, the genomes of these organisms are certain to be a treasure trove for both basic and applied microbiology. We have nominated the sulfur-oxidizing chemoautotrophic Proteobacteria Thiomicrospira crunogena (which belongs to the gamma subdivision) and Sulfurimonas denitrificans (which belongs to the epsilon subdivision) for genome sequencing efforts by the Department of Energy because:
1. Sulfur chemoautotrophs are of particular relevance to the DOE due to their potential utility to multiple sectors of the energy industry.
2. These two evolutionarily distant organisms span the phylogenetic and physiological diversity of sulfur chemoautotrophs in the Proteobacteria and will therefore provide a great deal more information about these diverse organisms than a single genome would.
3. T. crunogena and S. denitrificans, and organisms closely related to them, are ubiquitous in the ocean. Insight into their physiologies and metabolisms from their genomes will be invaluable in understanding the marine sulfur cycle, and facilitate comparisons of their carbon fixation strategies, which will enhance our understanding of primary productivity.

The genome of S. denitrificans was published in Applied and Environmental Microbiology: 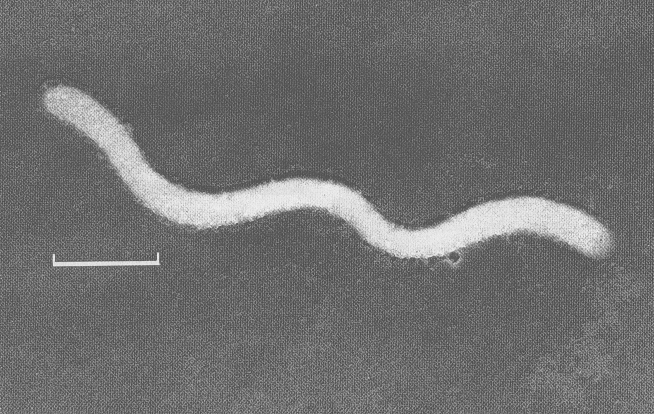 Scanning electron micrograph of Sulfurimonas denitrificans. The scale bar is 1 micrometer. Image by A. Timmer-ten Hoor.