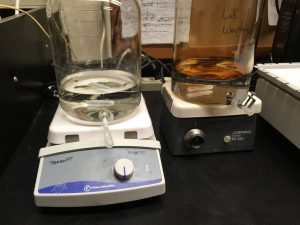 Preparing the exposure solution by combining weathered oil with seawater.

In a paper recently published in Marine Environmental Research, we characterized the transcriptomic response of our favorite sea anemone, Nematostella vectensis, to weathered oil and/or UV radiation. You can find the paper here.

Nematostella, like other coastal organisms, is vulnerable to oil spills, and because it lives in shallow salt marshes, it also experiences relatively high levels of ultraviolet radiation (UV). Oil compounds and UV can interact to produce oxidative stress greater than either stressor alone (“phototoxicity”), and our main objective was to investigate whether phototoxicity would occur with a naturally-weathered oil and realistic surface UV levels.

The use of weathered oil is important; after an oil spill, such as Deepwater Horizon, oil mixtures experience things like evaporation, bio-degradation, and photo-oxidation in the environment. These weathering processes change the composition of the mixture and, therefore, change its toxicity to organisms. Most previous phototoxicity studies have used unweathered oil, so we hoped to improve our understanding of the potential of weathered oils to be phototoxic. We benefited from collaborating with our world-class colleagues in the Marine Chemistry and Geochemistry Department, who were able to characterize the presence of oxygenated aromatic hydrocarbons in the weathered oil. These compounds can interact with UV and are a plausible source of phototoxicity. 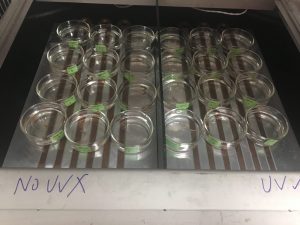 Nematostella ready to be exposed to simulated sunlight (visible and UV radiation).

Indeed, we found that combining oil and UV exposures resulted in a much larger stress response than either exposure alone, and that this response strongly activated canonical oxidative stress pathways. When I say “canonical”, I mean “characterized in vertebrates”: although there are >600 million years between vertebrates and Nematostella, many aspects of the antioxidant stress response seem deeply conserved. For example, we found that promoters of stress-response genes were enriched for binding motifs of bZIP proteins, suggesting that aspects of the oxidative stress response are mediated by this family of transcription factors, as in vertebrates.

We’re really happy to get this paper out the door. It was a lot of fun digging into the molecular stress response in detail, and it was great to bring together some of the top-notch scientists in the Biology (Sibel Karchner and Mark Hahn) and Marine Chemistry and Geochemistry (Collin Ward, Chris Reddy, and Bob Nelson) Departments here at WHOI! Our results show that even heavily-weathered oils can interact with UV to produce oxidative stress in shallow-water organisms, and in the future it will be interesting to see how phototoxic effects depend on the degree of weathering and the UV dose.