The physics of fluids in estuaries is at the core of our research, from the turbulent fluctuations at scales of centimeters and periods of seconds to the tidally averaged exchange flow between the river and ocean. The dominant physical processes in an estuary depends on the forcing conditions --  river flow and tidal amplitude -- and on the bathymetry. Estuarine fluid dynamics directly affect the salinity distribution and transport of material (sediment, nutrients, contaminants, organisms) between the river and the ocean. Our research has examined dominant physical processes driving exchange flow and mixing over a broad of estuarine parameter space, from large, partially mixed estuaries like the Hudson River estuary and San Francisco Bay, to shorter, shallower, energetic salt wedge estuaries like the Merrimack and Connecticut River estuaries, to extremely shallow but dynamic intertidal flats in Puget Sound and San Francisco Bay. 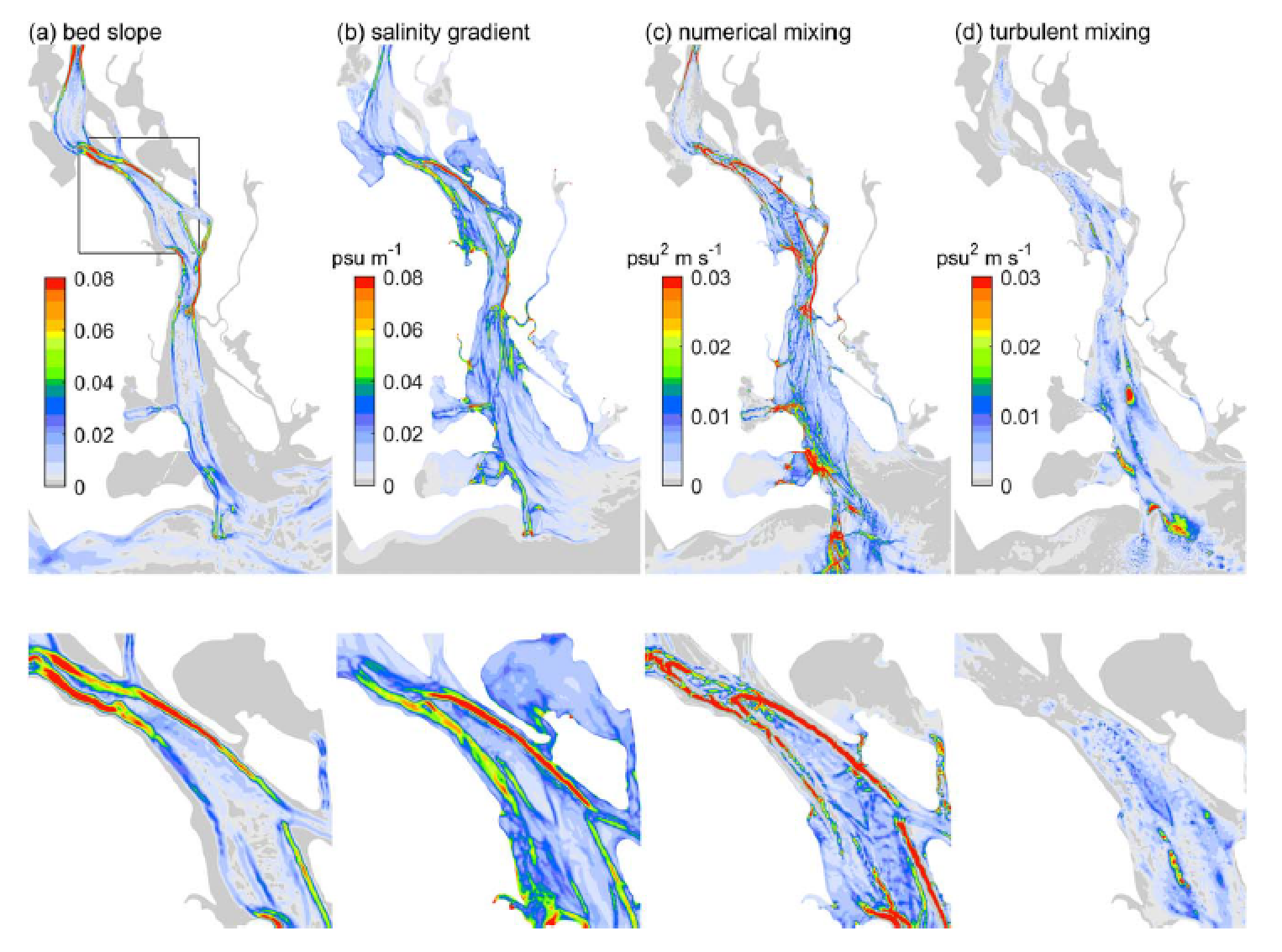 Turbulence and mixing in the Connecticut River estuary

In the tidal salt wedge  of the Connecticut River estuary, we use observations and a model to characterize when and where turbulent mixing occurs.  A high resolution model predicts the salinity distribution and velocity structure in the estuary, but doing so requires adjustment of the turbulence closure to reduce the prescribed mixing. Interaction between strong horizontal salinity gradients and steep topography increase the numerical mixing, which we quantify directly and depends on grid resolution. With high-resolution measurements we show that the total mixing in the model, numerical plus the turbulence closure, corresponds well with observations. Mixing occurs primarily in several distinct frontal zones where seaward expansion of the flow during ebbs creates bottom salinity fronts and strong vertical shear. The salinity fronts create zones of low bed stress during ebbs, providing a mechanism for trapping fine sediment that is not represented in the model cases with excess numerical mixing. 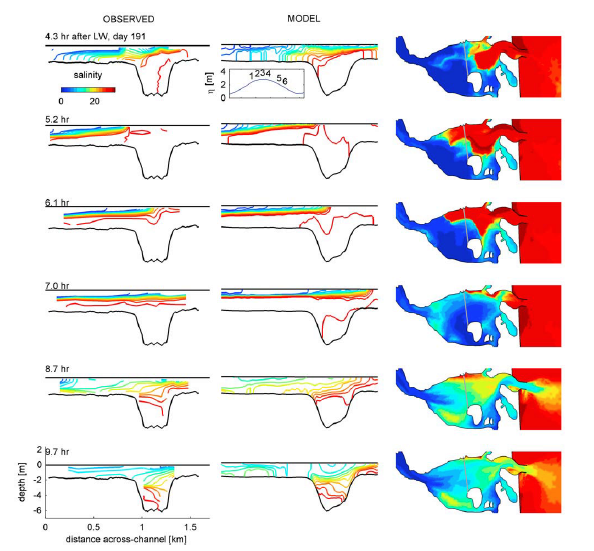 Salt flux in the Merrimack River

In the Merrimack River estuary, a tidal salt wedge, we use observations and a model to show that salt flux is predominantly due to tidal processes rather than steady exchange (and in sharp contrast with the Hudson). The salinity distribution is sensitive to river discharge -- at moderate to high discharge the estuary is short and highly stratified, while at lower discharges it shifts to a longer, more weakly stratified system; this transition occurs when the length of the salinity intrusion is similar to the tidal excursion. Good model performance required having well‐resolved grid bathymetry and low background mixing rates. 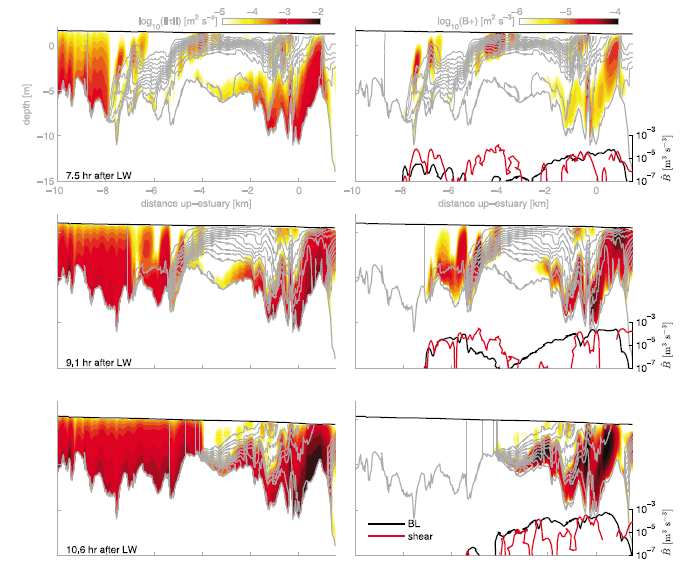 Mixing in the Merrimack River

We calculate the distribution of stress and mixing of salt in the Merrimack, a tidal salt wedge estuary. During floods, stresses are strong but mixing is limited because bottom boundary layer turbulence is separated from the pycnocline. During ebbs, fronts form at bathymetric expansions. Internal shear layers generated by opposing baroclinic and barotropic pressure gradients provide the dominant source of mixing during the early ebb (~50% of total), but late in the ebb, stratification weakens and boundary layer turbulence dominates. Mixing efficiency in the shear layers was high, and the overall mixing efficiency increased with river discharge. 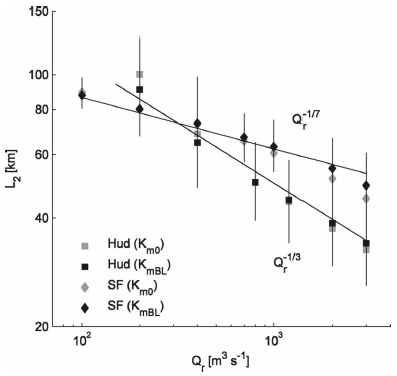 We use observations and a simplified model of the estuarine circulation and salinity distribution to show how the Hudson River estuary responds to changes in river discharge and tidal amplitude. With modifications to account for local and remote wind forcing and the reduction in mixing due to stratification, the simplfied model could match observations with skills similar to a detailed, 3-d circulation model. Application of the model to the Hudson and to San Francisco Bay demonstrated the sensitivity of the salinity distribution in each estuary to the along-channel bathymetry because of the strong dependence on the estuarine circulation on water depth.