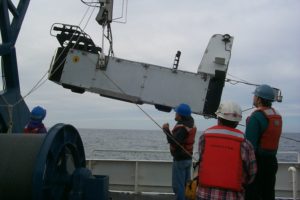 Development and use of systems to measure the material properties of zooplankton in the lab and in situ (with Dezhung Chu).  On a 2008 cruise aboard the R/V G.O. Sars, we were able to make measurements on krill (Euphausia superba) and a salp (Salpa thompsoni). A description of the work is on the Institutue of Marine Research (IMR), Bergen, Norway web site.

Application of high frequency multifrequency and broad-band acoustical systems in the study of krill in submarine canyons off the New England continental shelf and in the Gulf of Maine (Franklin Basin) in relation to their predators (birds, marine mammals, and fish) and their prey (other zooplankton). In the course of the work in 2010, we demonstrated improved agreement of net and acoustical methods for surveying euphausiids by mitigating avoidance using a net based LED strobe light system (Collaboration with Gareth Lawson and Andone Lavery).

Participation in a NURP sponsored program "Estimating the in situ acoustic target strength distribution and abundance of diapausing Calanus firmarchicus and its invertebrate predators in the deep basins of the Gulf of Maine" (with Mark Benfield, Tim Stanton, and Chuck Greene)

Acquisition of a motion compensated winch/slack tensioning system, and instrumented sheave for use with BIOMAPER II (with Tim Stanton).

The Census of Marine Zooplankton(CMarZ) was a field project of the Census of Marine Life. CMarZ worked toward a taxonomically comprehensive assessment of biodiversity of animal plankton throughout the world ocean. The project goal was to produce accurate and complete information on zooplankton species diversity, biomass, biogeographical distribution, genetic diversity, and community structure by 2010. Our taxonomic focus was the animals that drift with ocean currents throughout their lives (i.e., the holozooplankton). This assemblage currently includes ~6,800 described species in fifteen phyla; our expectation is that at least that many new species remain to be discovered. The census project sampled unique deep-sea marine environments to 5000 m and those likely to be inhabited by endemic and undescribed zooplankton species (with Dr. Ann Bucklin, U. Connecticut).

U.S. GLOBEC Georges Bank Program:   This lab investigated the bioacoustics of zooplankton, their abundance and biomass on the Bank from 1994 to 1999, and in the Gulf of Maine during the autumns and winters of 1997 to 1999 (with Chuck Greene, Cornell Univ and Mark Benfield, LSU).

U.S. GLOBEC Southern Ocean Program.  Acoustic and net sampling near the Antarctic Peninsula in 2001 and 2002 yielded insight to the overwintering of krill in that area as well as the zooplankton abundance and biomass in surrounding areas.

Silhouette photograph of zooplankton from the Gulf of Maine. The large euphausiid is Meganyctiphanes norvegica, the large copepod is Paraeuchatea norvegica (left), abundant copepods are mostly Calanus finmarchicus. An amphipod is located at lower right. (N. Copley)

DIGITIZER is a MATLAB-based computer program for measuring the lengths of marine organisms collected by MOCNESS (Multiple Opening/Closing Net and Environmental Sensing System).  The program begins by displaying a scanned photographic image of a seawater slurry containing large numbers of marine organisms, upon which is superimposed a reference grid. It then allows you to measure the organisms' lengths using the cursor on the computer screen and  automatically calculates each organism’s biomass and generates spreadsheet compatible output listings of basic statistics derived from the data. Text files of length, weight and size-frequency histograms are also produced.

Click to see a slide show of how our lab measures Displacement Volume of plankton samples.

The Biological and Chemical Oceanography Data Management Office (BCO-DMO), funded by NSF, is designed to provide data management services that can easily disseminate, protect, and provide short and intermediate term storage of marine biogeochemical and ecological data (http://www.bco-dmo.org/).  The goal is to provide research scientists and others with the tools and systems necessary to work with marine biogeochemical and ecological data from heterogeneous sources with increased efficacy. The office, in its third funding cycle, is providing a venue for funded investigators in the NSF Ocean Science Chemical and Biological Oceanography sections (and others) to submit their electronic data/metadata and other information for open distribution via the internet both during the course of their research and once they have completed it (Collaboration with Mak Saito, Adam Shepherd,, and Danie Kinkade).