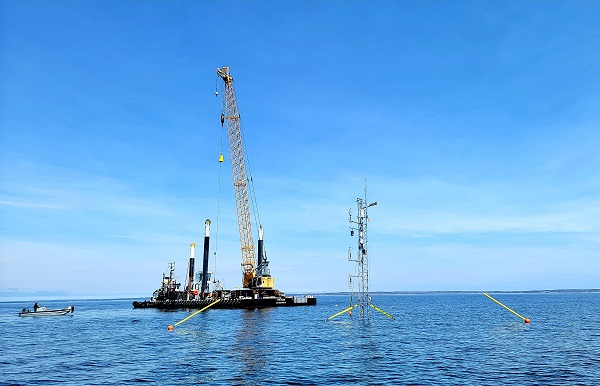 Buzzards Bay tower with vertical array of velocity and pressure sensors to measure wave-modulated transfer of energy between the atmosphere and ocean. Photo by Jay Sisson.

The transfer of kinetic energy between the ocean and atmosphere figures prominently in weather systems and global climate, as well as controlling the exchanges of heat and gases, and driving currents and waves. These air-sea transfers take place in the oceanic and atmospheric boundary layers, which are significantly different from rigid boundary layers due to the presence of surface gravity waves. Although progress has been made in understanding these wave-affected boundary layers, the specific processes governing wave-mediated transfers of energy and momentum are not well understood.

With funding from the National Science Foundation (NSF), we are currently investigating an enclosed coastal setting in Buzzards Bay, MA. The site serves as a natural laboratory for this research with a fetch-limited basin that is protected from oceanic swell and consistent strong winds. To investigate the wave-modulated transfer of energy between the atmosphere and the ocean, we expect to obtain measurements of strong winds and energetic young waves from both sides of the air-sea interface. Measurements are being collected from a fixed tower with a vertical array of velocity and pressure sensors and will include high-resolution sea-surface imagery from buoys.

In addition to contributing to air-sea interaction datasets, data collected in this study will be used for student analysis projects in a new WHOI-MIT Joint Program class. The Principal Investigators are currently participating in a job shadowing program for underrepresented community college students.