The 408,250 km2 Phoenix Islands Marine Protected Area (PIPA) is located entirely within the boundaries of the country of Kiribati in the remote central tropical Pacific. At 408,250 square kilometers, roughly the size of California, it is one of the largest (and deepest) marine protected areas in the world, as well as a UNESCO World Heritage Site [Figure 1]. It contains a vast expanse of largely pristine oceanic wilderness that includes eight coral reef islands, two submerged coral atolls, and many extinct underwater volcanos rising as much as 5000 meters (16,200 feet) from the seafloor [Figure 2]. PIPA is also home to more than 800 species of marine and terrestrial animals and, because of its great isolation, is uniquely positioned as a stepping-stone habitat for migratory and open-ocean species. PIPA also boasts a long history of human exploration, discovery, and exploitation, starting with early canoe explorers who arrived between 3,000 and 5,000 years ago from eastern Polynesia and Micronesia.

Long before they were recognized as a place worth protecting and even long before humans discovered them, the waters of PIPA have been a place subject to great environmental variability and change. That’s because the region sits in a part of the ocean that is deeply influenced by the El Niño Southern Oscillation (ENSO). Every 3 to 7 years on average, over the past thousands of years, the Pacific trade winds have weakened, equatorial upwelling—the lifeblood of the central Pacific—subsided, and water from the warm western Pacific spread east across the basin, raising the temperature of the waters within PIPA enough to cause corals to bleach and sometimes die [Figure 3]. However, because the PIPA is so remote, direct observations of reef response to this long history of repeated warming have been few and far between.

In 2005, an expedition led by The New England Aquarium (NEAQ) revealed the impact on PIPA’s reefs caused by the 2002-2003 El Niño, known as El Niño Modoki. This event hit PIPA particularly hard because the footprint of its warming was concentrated over the Central Pacific and the Phoenix Islands, rather than in the East Pacific, as occurs in a conventional El Niño [Figure 4].

As a result, the 2002-2003 El Niño killed corals across a wide swath of PIPA’s coral reef islands, reducing live coral cover by up to 60% on average, and almost 100% in Kanton’s lagoon [Obura and Manghubai 2011]. For several years after, the reefs began to recover, probably due to intact fish and grazing populations and the absence of local stressors. Research expeditions in 2009 and 2012 began to document a remarkable resurgence of coral cover, especially of coral communities located on the windward side of islands [Manghubai et al., 2012].

In 2015, a “super” El Niño of unprecedented strength, developed across the Pacific basin. In PIPA, the duration of heat stress that corals experienced exceeded even that of the 2002 event [Figure 3]. Water temperatures 1-2 degrees above normal persisted for 18 consecutive months, with degree heating weeks reaching 20 at Kanton Island. Our team was in PIPA conducting fieldwork in September 2015. Coral bleaching was visible then, and was also recorded by ecological surveys conducted by the team of Sangeeta Manghubai and Randi Rotjan. However, the levels of visible bleaching in September 2015 were much lower than expected given the levels of thermal stress imposed on the corals and the severity of bleaching in 2002, which was by all accounts weaker than 2015. This apparent contradiction between the expected and observed bleaching responses raises critical questions about the 2015 bleaching event in PIPA and, more generally, about how coral reefs might fare as the oceans continue to warm over the coming decades.

Our 2018 expedition, aboard Pangaea Exploration’s Sea Dragon, returns to the Phoenix Islands almost three years after the peak of the 2015 El Niño. What will we find? Hints have emerged from cruises by the Sea Education Association (SEA) that returned to the area in 2016 and 2017. However, no comprehensive scientific sampling has been conducted since 2015.

Now, using a combination of coral and seawater samples, ecological surveys, sensors and instruments, underwater videography and drones, we will conduct a comprehensive investigation, documentation, and analysis of the impact of the 2015 El Niño on PIPA’s environment and coral reef ecosystems. In addition, our sampling will allow us to put the scale of the 2015 event into context with the many El Niño’s that preceded it and to examine, for the first time, the potential mechanisms by which PIPA coral reefs survived warming events leading to levels of heat stress that killed other reefs.

Our science plan is designed to address several key questions:

Our 2018 expedition targets four of PIPA’s coral reef islands spanning its northern and southernmost boundaries. The islands were chosen for their north-south spread to provide a comparison between the response of oceanic and lagoonal reef communities to thermal stress across as wide an environmental distribution as possible. We will conduct a combination of underway water and plankton sampling; coral coring and water and tissue sampling at pre-determined locations; instrument deployments to record measurements of water temperature, pH, pCO2, current speed and direction, PAR (light), salinity, and oxygen; and conduct ecosurveys. We will also retrieve instruments deployed in 2015 and will carry out all of our activities in the presence of a Kiribati observer. 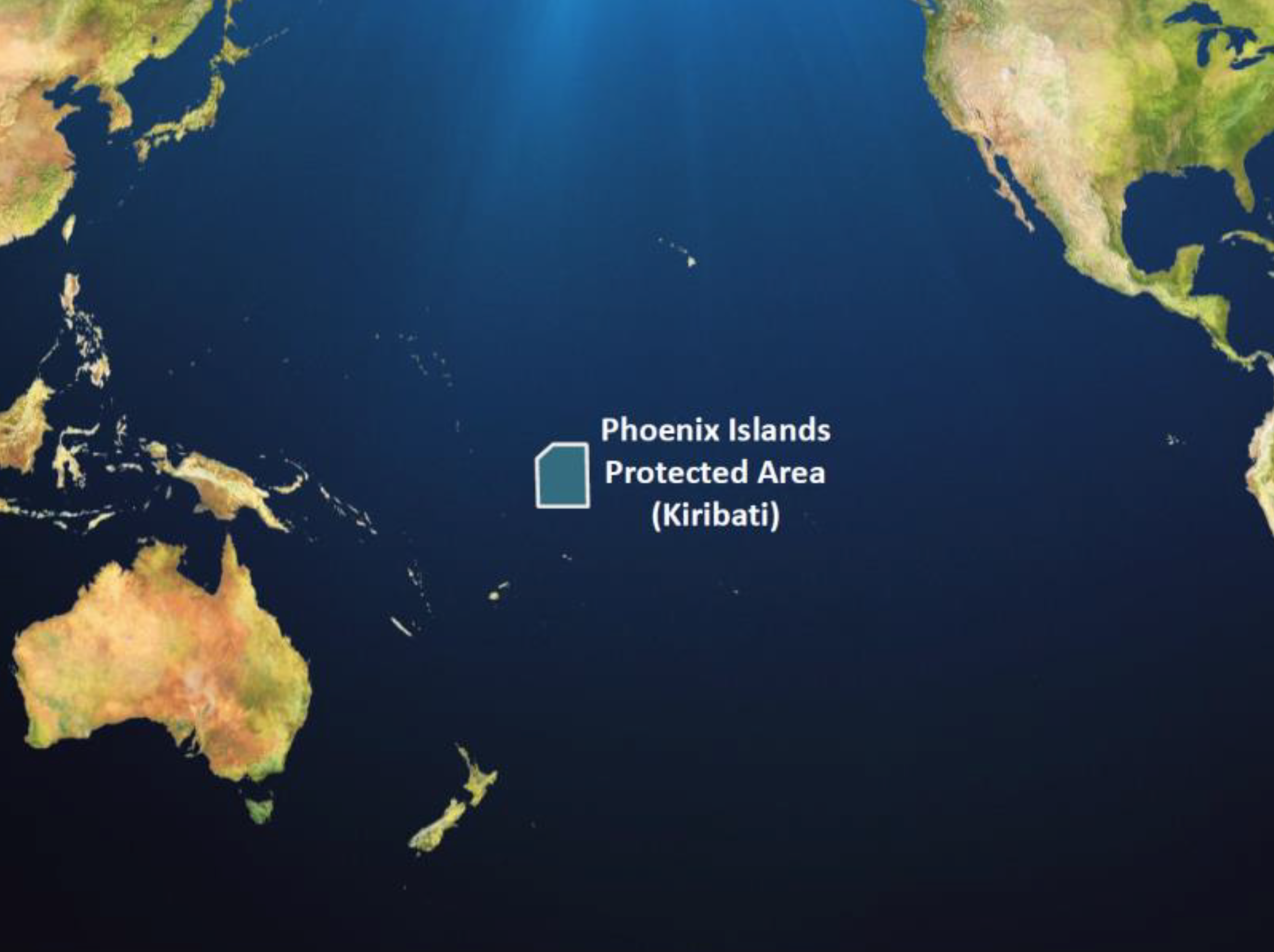 Figure 1: The location of the Phoenix Islands Marine Protected Area in the remote central tropical Pacific. 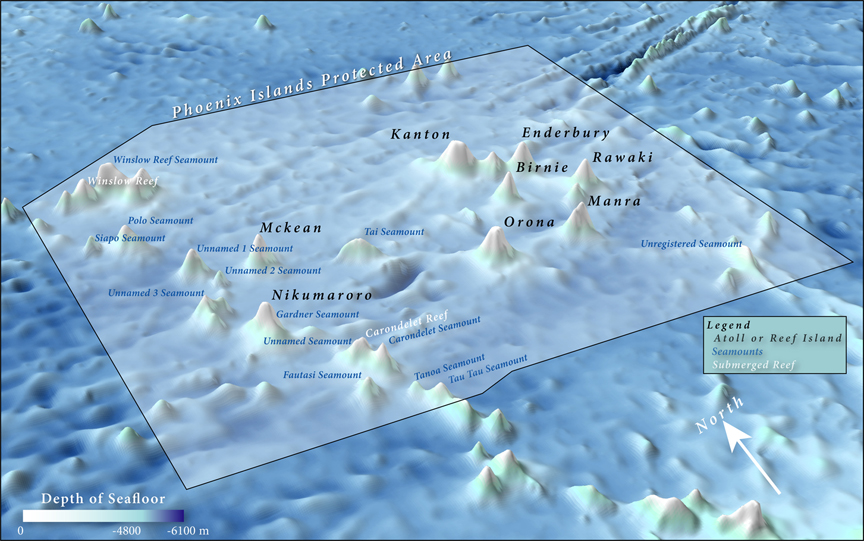 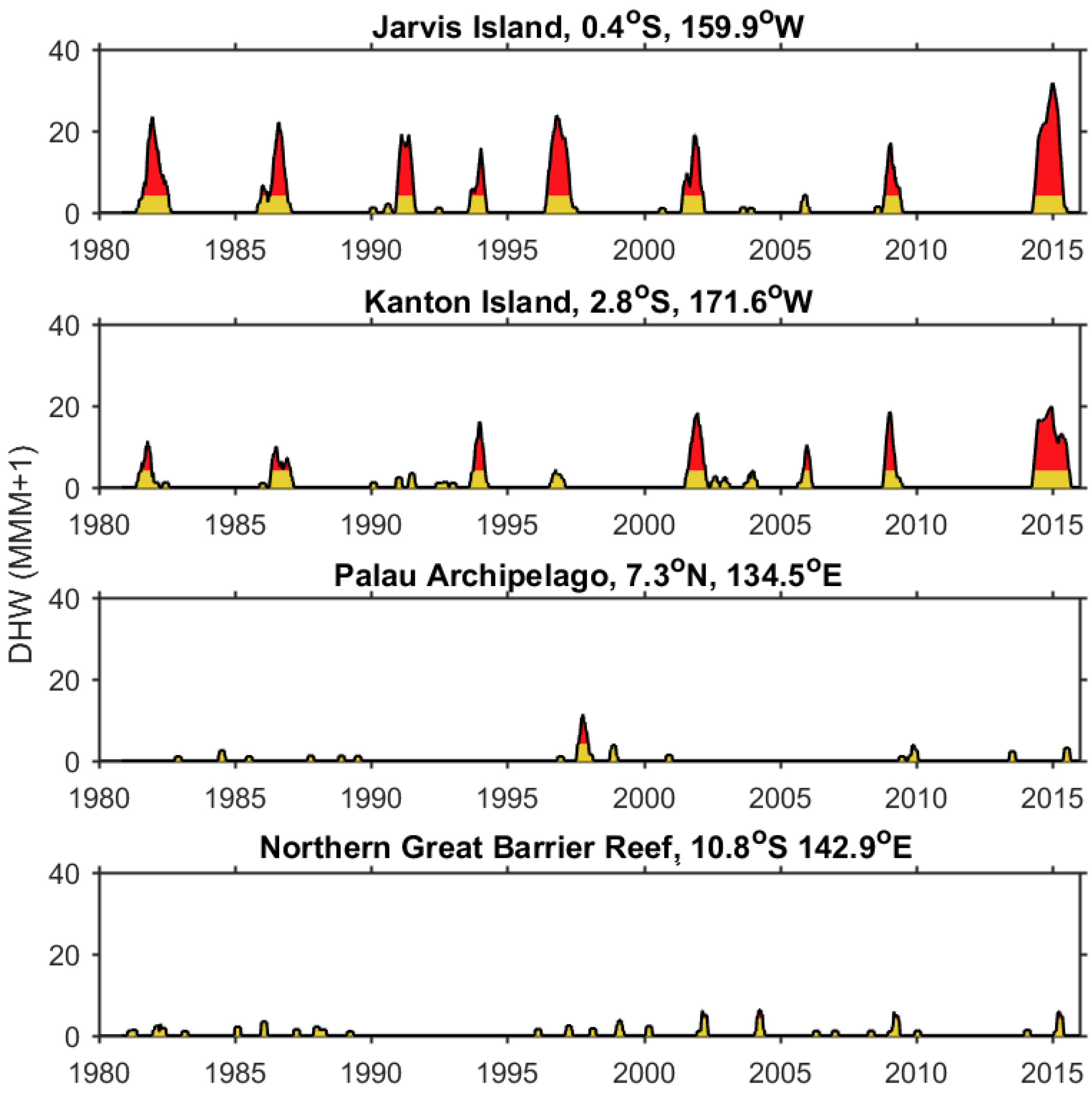 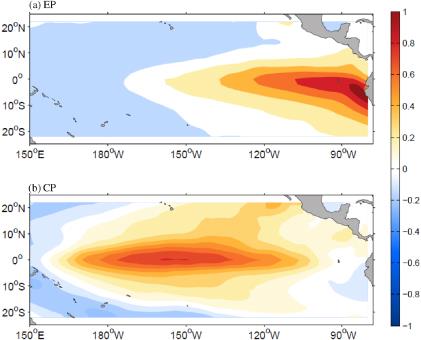 Figure 4: Sea-surface temperature distribution in the East Pacific (top) during an El Nino Modoki and Central Pacific during a conventional El Niño (bottom). The Phoenix Islands are located in the zone more severely affected by the El Niño Modoki. (From Yu and Zou, 2013).