The warming and acidification of the oceans, caused by rising levels of anthropogenic carbon dioxide, pose a serious threat to tropical coral reef ecosystems. We are currently studying the effects of these threats with our collaborators at the Palau International Coral Reef Center (PICRC) and The Nature Conservancy ( TNC), in the Republic of Palau. We are developing new tools to quantify coral and coral community resistance and resilience to ocean acidification and thermal stress.

(a) greater potential to survive thermal and acidification stress and

(b) provide larvae needed to reseed damaged or less resilient areas. Combining our approach with ecological considerations (connectivity, healthy populations of key functional groups), site-specific thermal history and global climate model projections of future changes, will assist in the development of indices of reef vulnerability that can be directly incorporated into the selection and design of marine protected area (MPA) networks.

An example of the coral cover and diversity in Nikko Bay (Hannah Barkley, WHOI)

In June 2012, three individuals from our lab (Hannah Barkley, Kathryn Rose and Pat Lohmann) flew into Apia, Samoa where we joined the crew of the vessel Nai’a (http://www.naia.com.fj/) for a month long expedition to the Phoenix Islands Protected Area (PIPA). The fourth member of our team Jay Andrew, a research scientist at the Palau International Coral Reef Center flew in from Palau. The Phoenix Islandsare part of the island nation of Kiribati, which partnered with the New England Aquarium and Conservation International to create PIPA in 2008. Today it is one of the world’s largest marine protected areas and a UNESCO world heritage site.

The main goals for our team were to evaluate the recovery the corals and coral communities from a massive bleaching event that hit the area in 2002. We also took water samples and deployed instruments that allow us to characterize the carbonate system chemistry (pH, pCO2, aragonite saturation state), temperatures and nutrient concentrations of seawater on the reefs. These data will help us to better understand the effects of ocean acidification and warming on the reef communities in the PIPA. For more on this expedition and our at-sea activities, see our blog http://pipa.neaq.org/2012/06/studying-climate-change-with-coral.html.

What’s so special about the equatorial Pacific?

In September 2012, graduate students Liz Drenkard and Alice Alpert, and dive operations manager Pat Lohmann flew into Kiritimati (Christmas Island), Republic of Kiribati, where they joined the crew of Pangea Explorations’ vessel Sea Dragon (http://www.panexplore.com/) for a 30 day expedition across the central Equatorial Pacific. Our goal was to survey and sample seawater, and coral skeletons and tissue on 3 coral reef islands dotted across 2000 miles of remote equatorial Pacific Ocean. Chip Young, of NOAA’s Coral Reef Ecosystem Division, and Kelsey Erensberger of US Fish and Wildlife joined our team. The expedition was funded with support from the National Science Foundation to Anne Cohen and Kristopher Karnauskas (NSF#OCE-1031971).

The central tropical Pacific is special because it is home to many of the world’s most pristine coral reef ecosystems, including the second largest marine protected area in the world – the Phoenix Islands MPA or PIPA.  But this region of the ocean is warming more rapidly than other tropical areas, making the corals that build the reefs more vulnerable to mass bleaching, and mortality. However, along the equator, the Pacific Equatorial Undercurrent (EUC) delivers cool, nutrient rich water to the west sides of coral reef islands located in its path. The EUC is strengthening with global warming, and for corals on the equatorial islands this process may mitigate or slow the warming enough to prevent bleaching.  Our expedition took us to 3 of these islands, Jarvis and Howland (both US Territories) and Maiana in the Gilbert Islands. Our goals were to deploy instruments and collect samples that will allow us to both characterize the seawater environment on the living reef (e.g., thermal structure, carbonate system chemistry, nutrient concentrations) and to investigate the connection between reef seawater and the EUC. We collected coral samples to study the effect of the EUC on coral growth and we collected tissue samples to analyze their fat content as well as the types of algal symbionts in the coral tissue. These measures, at these three sites, will give us a good idea of whether and how the EUC impacts the corals that build the reefs, and whether the EUC affords protection to the corals as tropical temperatures rise.  With this information, we can then make a start at predicting whether and how a strengthening EUC will mitigate the impact of tropical warming for the suite of equatorial coral reef islands in its path.

The Cohen Lab sailed around the Caribbean with Pangaea Exploration's vessel SeaDragon to learn how corals respond to changes in Atlantic and Pacific ocean climate.

This expedition began in St. Thomas, US Virgin Islands and stopped at Martinique and Barbados before ending at Curacao.

At each island, we spent several days SCUBA diving on coral reefs. We uses an underwater hydraulic drill to extract cores of skeleton from massive coral colonies. Read the blog: http://caribbeancorals.blogspot.com/p/sci.html 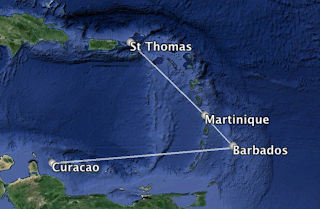