Down to a sunless sea:

Adapting to life at hydrothermal vents 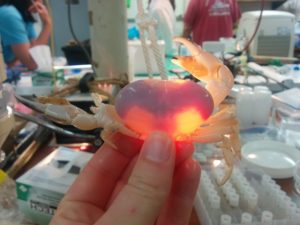 Hydrothermal vents represent stressful and adaptively complex environments, exposing vent-dwelling species to extremes of temperature, pressure, hypoxia, and sulfide toxicity. Mobile vent species, such as the crab Bythograea thermydron, face the added challenge of coping with huge swings in environmental conditions as they move between vents and their peripheries. Physiological studies have shown that these crabs have a remarkable capacity to detoxify sulfide, metabolize anaerobically, and compensate for pressure and temperature with cell membranes and metabolic enzymes that function over a wide range of conditions. This array of adaptations must be underlain by genetic changes, but so far very little work has been done on the genetics of B. thermydron.

Despite evidence for adaptive novelty in B. thermydron, analysis of genetic variation and adaptation in the species has been limited to a few individual genes. In these targeted studies, no candidate sequence differences were identified to explain physiological differences between vent crabs and their shallow-water counterparts. This is unsurprising given that adaptation in high-dispersal species can be highly heterogeneous across the genome.

In this project, we are exploring adaptation in the vent crab Bythograea thermydron by assembling and studying its transcriptome. By exploring the transcriptome, we can examine the sequence of all expressed genes in this species for which no reference genome is available. After assembly, we will compare this transcriptome to publicly-available sequences as well as to our transcriptomes from two shallow-water decapods, Rhithropanopeus harrisii and Carcinus maenas. This approach will permit identification of genes likely to have adaptations specific to life in a vent environment, providing a far more comprehensive examination than prior studies and yielding a rich baseline for future, more targeted work in the system.

In addition to illuminating evolutionary adaptation between species, these data will facilitate future research into vent biogeography. Adaptive pressures may differ between vents with different physicochemical parameters. The sequence data and analysis generated in the course of this work will identify potential genes of interest for future targeted work, and will permit the development of sequencing assays that can be applied to archived samples stored in freezers and in ethanol.

This is a pilot project,  thus far made possible by WHOI and by the NSF-UNOLS Chief Scientist Training Cruise program.

This is a pilot project, in collaboration with Stefan Sievert at WHOI.