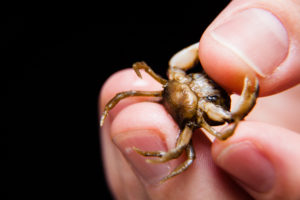 An infected mud crab displays the reproductive sac of the parasite Loxothylacus panopaei on its abdomen. Infected crabs become "zombies" and lose the ability to reproduce. (Photo by Will Parson/Chesapeake Bay Program)

In the Gulf of Mexico, the parasitic barnacle Loxothylacus panopaei tunnels into mud crabs, castrates them, and turns them into zombie nursemaids for the parasite's offspring. Fifty years ago, this body-snatching parasite invaded the Chesapeake and spread south to Florida. In its native Gulf range, the parasite infects just 1-5% of crabs, while in the invasive range infection rates are often over 70%. This project explores the parasite's impacts on its host's evolutionary trajectory, focusing on the idea of adaptive host resistance. By combining transcriptomics with field ecology and laboratory experiments, we are comparing crab populations across a mosaic of coevolutionary history that includes regions where the parasite is native, where it is absent, and where it was recently introduced. 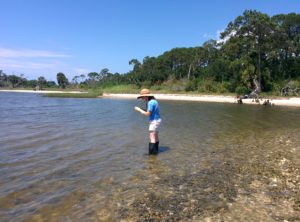 Fieldwork ranges from the bayous of Cajun country, through bays and estuaries of the Gulf and Atlantic coasts, to New Hampshire, where this parasite has never been found and the host crabs are naive. Back in the laboratory, we experimentally exposed crabs from each field site to parasite larvae to determine if populations vary in their susceptibility to parasitism under the same environmental conditions, and take tissue samples to peer into the genome of the host for evolutionary fingerprints. By combining field, lab, and genomic data, we are exploring the process of how – and how quickly – parasites impact the evolution of their hosts.