The emergence of toxic blooms of Pseudo-nitzschia species and increased prevalence of domoic acid (DA) in shellfish has been a focus of WHCOHH. The first GOM shellfish closures for DA were in 2016, and observational data from cruises and coastal monitoring showed that the increased toxicity resulted from the predominance of P. australis (Clark et al. 2019), a species novel to the GOM [50] (Fig. 1). Analysis of environmental conditions showed that 2016 was not anomalous for water properties or forcing conditions that might explain the shift in bloom dynamics, but instead that introduction of P. australis from outside the GOM was likely the key factor. Similarly, high DA levels closed shellfish beds in Narragansett Bay (RI) in 2017 for the first time, also linked to the novel presence of P. australis (Sterling et al. 2022). To diagnose P. australis in the GOM we used a regional circulation model with particle tracking to assess transport pathways, growth conditions, and source waters for P. australis. Model results showed that the timing of observed DA toxicity– starting in the Bay of Fundy and then along the Maine coast – was consistent with transport of P. australis from source waters on the Scotian Shelf (Clark et al. 2021, 202) (Fig. 2). Monitoring of Pseudo-nitzschia and DA has continued through WHCOHH since 2016, and P. australis has remained a part of the seasonal progression of Pseudo-nitzschia blooms. In 2016 the P. australis bloom produced toxin at levels that far exceeded the other Pseudo-nitzschia species, resulting in the high DA conditions (Clark et al. 2019). In subsequent years, toxin monitoring has recorded a steady decrease in shellfish DA despite the continued presence of P. australis (Fig. 3). This suggests a changing relationship between species abundance and DA toxicity, perhaps due to nutrient availability (Clark et al. 2019).

In addition to the evolving HAB threat of P. australis, WHCOHH research has continued to advance our understanding of A. catenella. The resting cyst stage of A. catenella provides an important control on bloom initiation, and the transition from dormancy to germination was long thought to be controlled by an endogenous clock (Anderson and Keafer 1987). However, studies of A. catenella cysts from NM showed that temperature exposure through cumulative chilling determines the timing of the transition from dormancy into a quiescent state where cysts can germinate if conditions are favorable (Fischer et al. 2018). The conceptual framework of accumulated chilling controlling cyst quiescence affects bloom timing, with greater synchronization of germination and therefore more likely persistence of A. catenella in locations with greater seasonal variability in temperature (Brosnahan et al. 2020). WHCOHH research also showed that temperature controls the timing of cyst germination once they are quiescent (Fischer and Brosnahan 2022). These radical revisions our understanding of cyst dynamics point to major role for water temperature to exert additional influence on bloom timing and intensity in the GOM and elsewhere.

Much of our understanding of A. catenella dynamics is based on field, lab, and modeling studies of the GOM and NM, but with climate change we expect familiar patterns to shift. For example, Massachusetts Bay is a basin at the southern end of the GOM, and typically A. catenella blooms are transported there from northerly sources via the coastal current (Franks and Anderson 1992; Anderson 1997). In recent years (2019-2021), the opposite has occurred, with larger blooms and earlier toxicity in Mass Bay than in waters to the north. The reasons for this are not yet known, and may be related to increased cyst abundance (D. Anderson, unpublished data), changes in cyst germination, or changes in circulation patterns within the Bay (Scully et al. 2022). Similarly, new evidence from WHCOHH points to the Arctic as a region where climate change is substantially increasing HAB risks. Surveys of the Chukchi Sea found extensive A. catenella cysts beds that support recurrent local blooms (Anderson et al. 2021). Analysis indicates that the warming over the past two decades has increased cyst germination and advanced the timing of the bloom such that A. catenella blooms could pose a significant threat to public and ecosystem health in Alaskan Arctic communities.

To quantitatively assess impacts of climate change on HABs, we have coupled downscaled climate models with regional models of circulation and bloom dynamics in the GOM. The approach was developed based on our review that emphasized using process-based models, dynamically downscaling climate influences, quantifying uncertainty, and incorporating long-term observations (Ralston and Moore 2020). We coupled the established GOM-scale model with dynamically downscaled climate model predictions for the Northwest Atlantic to assess changes in growth and transport for Pseudo-nitzschia blooms (Clark et al. 2022). In the climate projections, inflows from the Scotian Shelf are predicted to increase, temperature increases will make conditions more favorable for P. australis, and the Pseudo-nitzschia species assemblage is likely to shift toward warmer adapted species. We have also coupled the downscaled climate model with the A. catenella model for the GOM (Stock et al. 2005; He et al. 2008; Li et al. 2009). Preliminary results indicate that temperature increases will shift the A. catenella bloom earlier in the year and increase maximum cell concentrations, particularly in the Eastern GOM. We have linked the A. catenella model to a shellfish toxicity submodel based on comparisons with monitoring data and generated long-term hindcasts and climate projections of toxicity along the coast. In parallel, we have collected shellfish toxicity data from state monitoring programs in Maine, New Hampshire, and Massachusetts to develop indices of HAB intensity for the Eastern and Western GOM over the period 1980-2022 (Fig. 4). This index extends the previous record (Anderson et al. 2014) and creates a means for distinguishing interannual variability from climate-change trends.

Anderson, Donald M. 1997. Bloom dynamics of toxic Alexandrium species in the northeastern US. Limnology and Oceanography 42: 1009–1022.

A comprehensive resource for information about harmful algal blooms.

Observations and commentary on the status of Paralytic Shellfish Poisoning (PSP) outbreaks in the northeast United States. 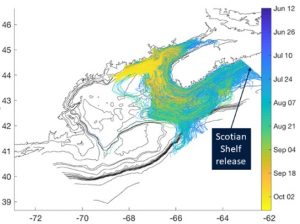 Fig. 2. Particle tracks (colored by date) released on the Scotian Shelf in a hindcast of 2016, illustrating connectivity potential of the fall bloom. From [2] 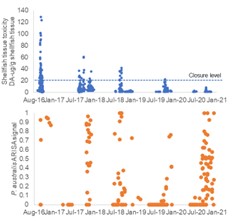 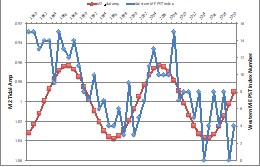