In the Gulf of Maine, harmful algal blooms regularly threaten to contaminate commercial shellfish beds. Two types of algae in particular, Alexandrium fundyense and Pseudo-nitzschia, produce toxins that can harm humans if they ingest intoxicated shellfish. The close monitoring of shellfish beds by state agencies ensures that consumers are protected from contaminated shellfish, while also providing for safe harvest of uncontaminated product.

In 2008, scientists working in the WHCOHH were able to accurately forecast that year’s A. fundyense bloom, providing coastal resource managers, fishermen, and consumers with prior warning of potential contamination. Using data on A. fundyense cellular physiology, ocean currents, weather patterns, salinity, runoff, winds and tides, along with other factors, researchers from WHCOHH were able to run a predictive model and give weekly updates regarding the extent and severity of the A. fundyense bloom.

This project continues in the same vein. By investigating the factors that contribute to A. fundyense bloom decline, researchers at WHCOHH look to further refine their predictive model, enhancing the accuracy of a tool that has already proved helpful in the past. Furthermore, the center will also embark on creating a predictive model for Pseudo-nitzschia, a genus of harmful algae that, despite its known effects on human health in other areas, has not been widely researched in this region.

In order to gather the data needed for these models, researchers will employ a variety of novel robotic sensing systems, which can supply real time data from off-shore moorings. In addition, the deployment of sensors on board the R/V Tioga will also enable the collection and analysis of samples from a widespread geographic area.  The confluence of these systems assists scientists at WHCOHH with modeling factors that contribute to the distribution, survival, proliferation, and the associated toxicity of these harmful algal blooms.

A comprehensive resource for information about harmful algal blooms.

Observations and commentary on the status of Paralytic Shellfish Poisoning (PSP) outbreaks in the northeast United States. 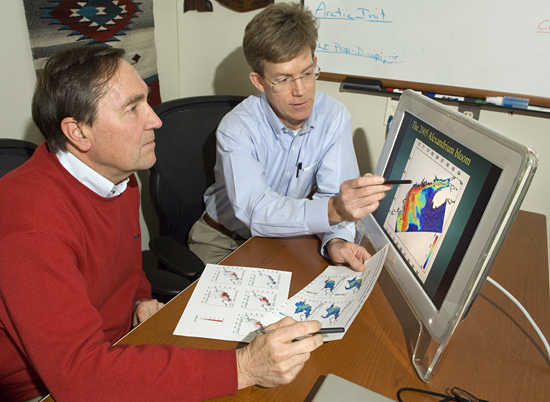 WHOI biologist Don Anderson (left) and oceanographer Dennis McGillicuddy review the results of a computer simulation of the 2008 season for Alexandrium fundyense—a toxic form of algae—in New England waters. A combination of abundant beds of algal seeds and excess winter precipitation in the Northeast U.S. have set the stage for a potentially big bloom. (Photo by Tom Kleindinst, Woods Hole Oceanographic Institution)