There is great need to understand rates of primary production and respiration in order to predict, among other things, the feedback between changing climate and the ocean carbon cycle. Better understanding of the ocean’s carbon cycle relies on development of new approaches and tools for making production and respiration measurements. Measuring production and respiration in the ocean is a notoriously difficult undertaking, and two general types of approaches are currently in use. The first is to measure chemical variables over space and time, and then use geophysical data and models to assess sources or sinks of CO2 or O2 integrated over space and time. The second approach is to obtain “instantaneous‟ rate measurements by collecting water from the ocean and conducting closed-system (i.e. bottle) incubation experiments in order to track changes in concentration or isotopic fluxes of CO2 or O2 over time. The relative merits of these two approaches have been debated vigorously and there are compelling arguments for and against each. Regardless, the bottle incubation is a mainstay approach for oceanographers, and will continue to be used to make important advances in our field. In its purest application, bottle incubations are placed back in the ocean after the incubation is set up in order to maintain experimental conditions that mimic in situ conditions as closely as possible. Alternatively, overthe- side conditions may be simulated in on-deck incubators into which the bottles are placed. However, the act of setting up incubations removes organisms from their natural environment, and significant errors occur when incubated samples are exposed to unnatural conditions.

To eliminate the challenge of replicating in situ conditions, an automated in situ incubation system for making rate measurements will be constructed. When developing this system, emphases will be placed on enhancing 1) accuracy, through integrating latest-generation sensors that are vastly more stable and durable than their predecessors; 2) accessibility, through keeping the cost low and complexity to a minimum; and 3) autonomy, through designs that will unchain rate measurements from the need to remove water and organisms from the ocean. The system, which measures oxygen evolution and consumption in incubation chambers, is simple, modular, low-cost, and versatile. The incubator is called PHORCYS (PHOtosynthesis, Respiration, and Carbon balance Yielding System). PHORCYS will be demonstrated to work for a variety of purposes and under a wide range of oceanic conditions.

Design and testing of PHORCYS will include development of a simple, modular, low-cost PHORCYS system capable of making high-precision oxygen measurements in clear and opaque incubation chambers deployed in situ; configuration of PHORCYS for use on a drifting array in order to study upper water column primary production; configuration of PHORCYS for use with sediment traps in order to assess sinking particle respiration rates; creation of an experimental version of PHORCYS with extended capabilities that can be used for in situ amendment incubation experiments; testing different configurations on short cruises in coastal waters and on cruises of opportunity to the open ocean; comparison of PHORCYS results with those collected using other techniques; and creation of a standalone unit for education. The goal is to create a PHORCYS system that will be widely adopted by the oceanographic community and used for a variety of process studies. 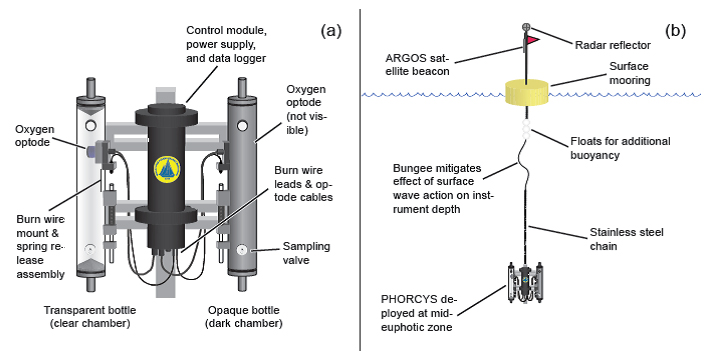 (a) Design and major components of the PHORCYS. (b) Rigging scheme for open-ocean deployments from a drifting surface mooring, as described in the text.