Environmental Lipidomics of Suspended and Sinking Particles in the Upper Ocean

Plankton in the ocean play an important role in regulating Earth’s climate due to their role in cycling carbon dioxide.  For example, some plankton use photosynthesis to convert carbon dioxide into the organic molecules that compose their cells.  About a quarter of these organic molecules are lipids, which serve important roles as structural components of membranes, as energy reserves in oil bodies, and as signaling molecules.   In some planktonic cells there are over one thousand different types of lipid molecules, each playing a distinct and essential role in the metabolism of the cell.

Planktonic lipids are also important for humans.  They are measured by geoscientists in order to address a wide variety of problems, from understanding when life evolved on Earth, to estimating the temperature of the ocean in geological past, to assessing the health of plankton and their ability to conduct photosynthesis.  Planktonic lipids are also the main components of petroleum, a critical energy source for transportation and industry. Finally, ocean plankton are the sole sources of many ‘essential’ lipids that humans require in their diet but cannot efficiently synthesize themselves.  Notable examples are eicosapentaenoic acid (EPA) and docosahexaenoic acid (DHA), which in humans play key roles in cardiovascular health, hormone production, and inflammation management. On average, the global population of humans is chronically deficient in EPA and DHA.  Seafood is essentially the only source of these essential fatty acids to the human diet, and yet we do not know if production of these lipids by marine organisms will be able to keep up with future global demand.

Despite the importance of planktonic lipids, geoscientists have only a basic understanding of lipid distributions in the ocean and cannot predict how lipids will change in response to future global warming.  Results from lab experiments with cultures of phytoplankton suggest the potential for significant future alterations in the types and amounts of lipids produced in the oceans.  The research being conducted as part of this project seeks to address this problem by producing the first global-scale assessment of lipids in the ocean.  The overarching strategy will be to apply lipidomics, a state-of-the-art method for simultaneously analyzing all of the lipids in a plankton cell, to a library of thousands of samples from a broad range of ocean environments.  These environments nearly span the global range in factors thought to affect plankton lipid metabolism.   This project will shed new light on the identity, sources, and fates of the vast diversity of planktonic lipids, and enable scientists to predict and respond to changes in the future output of lipids from the ocean.  The project will also inform our understanding of petroleum formation, and provide geoscientist with better tools for understanding Earth’s history. 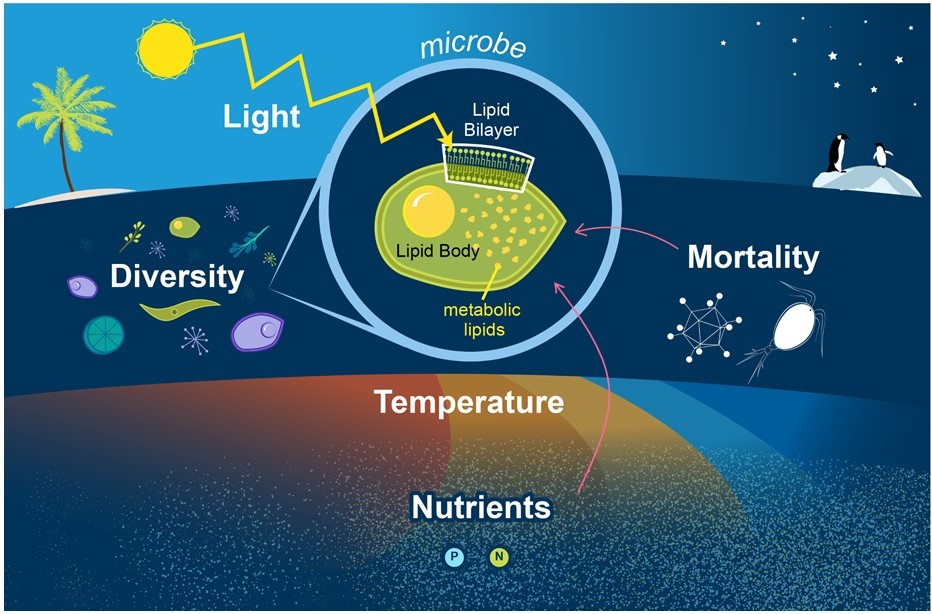 Lipids are fundamental components of all cells. Cellular lipids compose membrane bilayers and lipid bodies used for storing energy. Lipids also play roles in myriad other metabolic processes. We are examining how external physical, biological, and chemical factors affect the distribution of lipids in microbes in the ocean.