Production and Fate of Oxylipins in Waters of the Western Antarctic Peninsula: Linkages Between UV Radiation, Lipid Peroxidation, and Carbon Cycling

The depletion of atmospheric ozone over Antarctica leads to abnormally high levels of ultraviolet (UV) light from the sun reaching the surface of the ocean; this UV can be a source of significant stress to organisms in Antarctic marine ecosystems. This phenomenon is predicted to continue for the next half century, despite bans on ozone-destroying pollutants.  One group of organisms that is particularly vulnerable to the effects of UV light are phytoplankton.  These organisms live in the surface of the ocean, where there is no protection from the sun’s UV light over the long summer days of the Antarctic.  Phytoplankton are similar to plants because they conduct photosynthesis, which converts carbon dioxide into sugar and other molecules that they store in their bodies.  In addition, phytoplankton are similar to plants because they are at the base of the food chain; phytoplankton are eaten by larger plankton, which are eaten by fish, which are eaten by penguins and whales, etc.  In the Antarctic, phytoplankton contain a lot of fat, and this fat makes its way up the food chain too, ultimately being used by penguins and whales to keep them warm.  However, the molecular structures of fats are easily attacked by UV light.  When this happens, fats can be transformed from healthy molecules into potentially harmful molecules, which are then released into the environment where they can impact the behavior of other marine life. This project will use state-of-the-art molecular methods to answer questions about extent to which UV light damages fat molecules in phytoplankton, and how these molecules effect the way the food chain works in the ocean near Antarctica.  The amount of UV light hitting phytoplankton is likely to change in the future because the melting of sea ice that will open new territory for phytoplankton and ozone levels in the atmosphere will fluctuate; this project will yield predictive information on how Antarctic marine organisms will respond.

Lipid peroxidation is often invoked as consequence of increased exposure of phytoplankton to UVR-produced reactive oxygen species (ROS), but the literature is practically silent on peroxidized lipids and their byproducts (i.e. oxylipins) in the ocean.  In waters of the West Antarctic Peninsula (WAP), spring-time blooms of diatoms contribute significantly to overall marine primary production.  Oxylipins from diatoms can be highly bioactive; their impact on zooplankton grazers, bacteria, and other phytoplankton has been the subject of intense study.  However, almost all of this work has focused on the production of oxylipins via enzymatic pathways, not by pathways involving UVR and/or ROS.  Furthermore, rigorous experimental work on the effects of oxylipins has been confined almost exclusively to pure cultures and artificial communities.  Thus, the true potential of these molecules to disrupt carbon cycling is very poorly-constrained, and is entirely unknown in the waters of the WAP.  Armed with new highly-sensitive, state-of-the-art analytical techniques based on high-mass-resolution mass spectrometry, the principal investigator and his research group have begun to unconver an exquisite diversity of oxylipins in natural WAP planktonic communities.  These techniques will be applied to understand the connections between UVR, ROS, oxylipins, and carbon cycling. The project will answer the question of how UVR, via ROS, affects oxylipin production by diatoms in WAP surface waters in controlled experiments conducted at a field station.  With the answer to this question in hand, the project will also seek to answer how this phenomenon impacts the flow of carbon, particularly the export of organic carbon from the system, during a research cruise. The level of UVR-induced stresses experienced by oxylipin-rich planktonic communities in the WAP is unique, making Antarctica the only location for answering these fundamental questions. Major activities will include laboratory experiments with artificial membranes and diatom cultures, as well field experiments with phytoplankton, zooplankton, and bacteria in WAP waters. 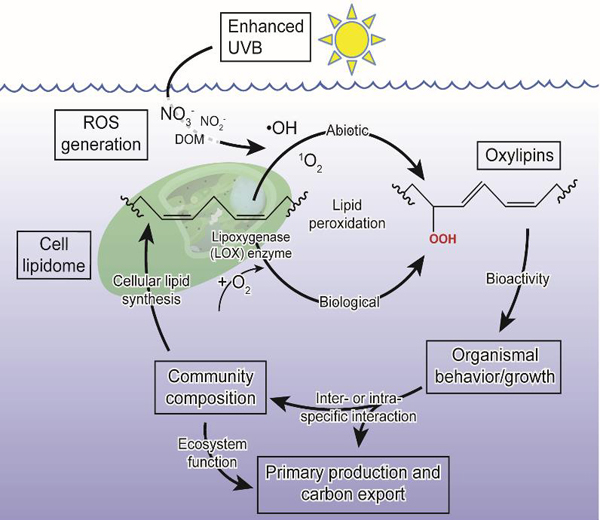 Schematic of the routes of lipid peroxidation in the upper ocean, and the potential role of resultant bioactive oxylipins. (James Collins, WHOI) 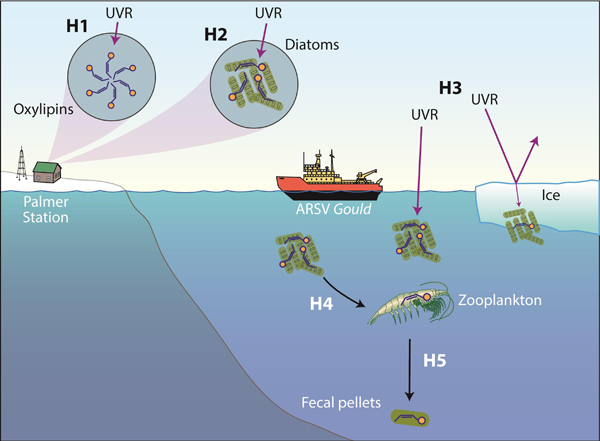