Overview: Microbes operate on tiny spatial scales and rapid time scales.  Yet the combined metabolic activity of microbes affects global-scale biogeochemical cycles that drive variations in Earth’s climate over millennia.  This is particularly true of the microbes in North Pacific Subtropical Gyre (NPSG), which due to the sheer size of their environment exert a profound influence on our planet.  The biogeochemical significance of different groups of microbes in the NPSG is fundamentally controlled by their ability to compete for nutrients (i.e. bottom-up controls) and evade their respective agents of mortality (i.e. top-down controls). In addition, there is a growing recognition that “lateral” controls (inter- and intra-species microbial interactions mediated by signaling) also have the potential to critically mediate biogeochemical fluxes within marine microbial ecosystems.

There is an incomplete knowledge of whether nutrient-stressed plankton are more or less susceptible to either viral infection or grazing. This is extremely important to know because if nutrient-stress affects cellular elemental compositions then different routes of mortality will affect the trajectory of elements through the ecosystem of the NPSG.  Since planktonic microbes live for days, the characteristic residence times of nutrient competition and mortality defense must be on the order of hours or less.

Cell membranes are the interfaces between plankton and their environment, and thus are the front line of microbes’ responses to nutrient-stress, mortality, and lateral interactions.  Decades ago, oceanographers seized on membrane lipids as indicators of microbial identity.  Over the last several years, the Van Mooy Lab and other groups have sought to use lipids as indicators of how microbes respond, acclimate, and adapt to their environment.  This projects involves a high temporal-resolution examination of microbial lipids at Station ALOHA that will allow observations of correlations between lipid signatures of nutrient stress and mortality on microbial timescales.  We study both the surface water planktonic community and descending detrital particles; the latter are contain complex communities, which are also fundamentally controlled by nutrient-stress, mortality, and lateral interactions. This is a truly collaborative project involving 16 PIs from 10 different institutions (http://scope.soest.hawaii.edu/).

Benjamin Van Mooy1 and many collaborators2 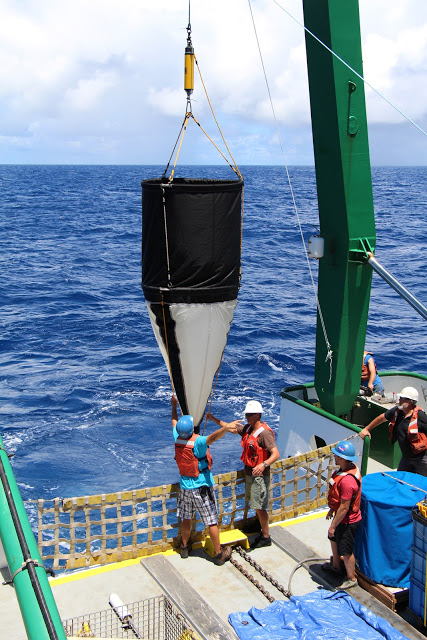