Redox Cycling of Phosphorus in the Western North Atlantic Ocean

Overview.  Phosphorus is an essential element for marine plankton, and has been a focus of chemical oceanography for nearly a century.  For most of this time, phosphorus was thought to occur only in the +5 valence state, in compounds such as phosphate.  However, over the last 17 years, numerous lines of geochemical and genomic information have emerged to show that phosphorus in the +3 valence state, particularly dissolved phosphonate compounds, may play a very important role within open ocean planktonic communities.  This is particularly true in oligotrophic gyres such as the Sargasso Sea, where growth by plankton can be limited by the scarcity of phosphate.  Yet phosphorus redox cycling rates are almost completely unknown throughout the ocean, and the specific molecular identities of the phosphonates in seawater have defied elucidation. We recently developed a method to make measurements of the chemical reduction of phosphate to low molecular weight (LMW) P(+3) compounds in the Sargasso Sea.  We will use this method as an analytical foundation for answering the following questions:

Question #2: How quickly are LMW P(+3) compounds taken up by planktonic communities?

Question #3: How does phosphate availability impact the production and consumption rates of P(+3) compounds?

Question #4: In which broad groups of plankton does the oxidation of LMW P(+3) compounds provide a source of phosphorus for growth?

Answering these questions will involve an oceanographic cruise, led by the PI, in the western North Atlantic Ocean between the east coast of the United State and the Sargasso Sea, which will span a known range in phosphate cycling regimes.  We will design and execute a research program that spans at-sea chemical oceanographic experimentation, state-of-the-art chromatography and mass spectrometry, and novel organic synthesis of 33P-labeled P(+3) compounds. 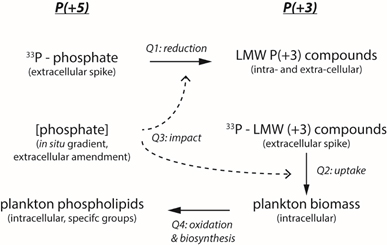 Schematic of the components of the phosphorus redox cycle being studied. Q1, Q2, Q3, and Q4 refer to the four major research questions posed. 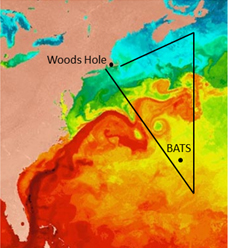 Map showing the track of the research cruise for this project. The background color represent surface water temperature, which correlates will with changes in phosphorus physiology in plankton.