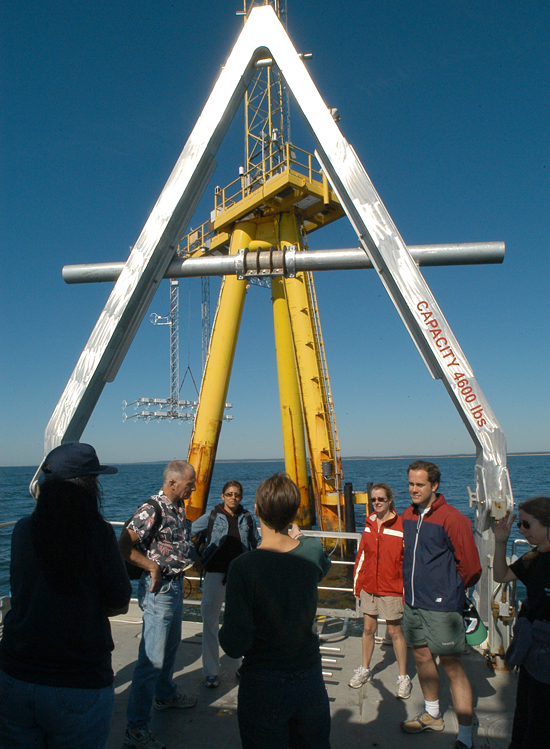 Sosik leads a multidisciplinary team conducting long-term research on marine ecosystems and how they are changing in response to intersecting pressures from human activity, environmental variability and climate change. She discusses her bold plan to explore the ocean’s twilight zone is one of the first ideas of The Audacious Project, TED’s initiative to inspire global change.

Visitors From the Ocean Twilight Zone– The New York Times

Researchers recently hauled up specimens from a layer of the world’s seas that contains an abundance of aquatic life.

NASA scientists are venturing into the ocean’s “twilight zone” to explore how phytoplankton are affecting Earth’s climate.

NASA and the National Science Foundation are funding the Export Processes in the Ocean from Remote Sensing (EXPORTS) oceanographic campaign. With more than 100 scientists and crew from nearly 30 research institutions, EXPORTS is the first coordinated multidisciplinary science campaign of its kind to study the pathways, fates and carbon cycle impacts of microscopic and other plankton using two research vessels, a range of underwater robotic platforms and satellite imagery.

It’s ‘the last frontier on Earth that’s truly not well understood,’ and scientists are about to explore it – Boston Globe

A team of marine biologists, engineers, and other specialists from the Woods Hole Oceanographic Institution will embark on the first long-term study of this netherworld, a nearly lightless region believed to be teeming with life — perhaps more than the rest of the ocean combined.

Dr. Heidi Sosik spoke at the annual TED conference in Vancouver to shed light on the secrets of the ocean’s twilight zone. The Twilight Zone project is among five recipients of money from the Audacious Project, an initiative launched at this year’s TED conference to fund projects “that have the potential to create massive, global change.”

With $35M grant, WHOI scientists will dive to the edge of ocean’s light – Cape Cod Times

The Woods Hole Oceanographic Institution has received one of the largest private grants in its history, $35 million, to explore one of the least understood areas on earth.

WHOI among first funding recipients of The Audacious Project – EurekAlert!

The $35 million award to WHOI will catalyze a multi-faceted, multi-year effort to explore and understand one of the planet’s hidden frontiers: the ocean’s twilight zone, which extends around the world from about 200 to 1,000 meters below the surface of the ocean.

Heidi Sosik, a senior scientist in the Biology Department at Woods Hole Oceanographic Institution (WHOI) has been named a 2018 Fellow of The Oceanography Society (TOS). Election as a fellow is bestowed upon TOS members by their peers to honor individuals who have attained eminence in oceanography through their outstanding contributions to the field of oceanography during a substantial period of years.

Heidi M. Sosik selected as a Fellow of The Oceanography Society – EurekAlert!

The Oceanography Society (TOS) congratulates Dr. Heidi M. Sosik (Senior Scientist, Woods Hole Oceanographic Institution) on her selection as as a Fellow of The Oceanography Society. The citation on Dr. Sosik’s certificate recognizes her for outstanding contributions to phytoplankton ecology, sensor development and graduate and undergraduate ocean science education

McLane Labs partnered with Ward Aquafarms , a Cape Code (MA) based business, to deploy Imaging FlowCytobot at Ward Aquaculture Farm to monitor for Cochlodinium polykrikoides bloom in an effort to prevent damage to juvenile shellfish.

How Do Microbial Ecosystems and Climate Change Interact – EOS

The American Society for Microbiology and the American Geophysical Union offer insights form a transdisciplinary collaboration of their scientists regarding this question and areas for further study.

Plankton are at the center of a long-term study in the waters south of Martha’s Vineyard that seeks a better understanding of how environmental changes are affecting the aquatic food chain.

A group of scientists is taking a deep dive into the salty waters and food web south of Martha’s Vineyard.

The Martha’s Vineyard Coastal Observatory off South Beach in Edgartown has become part of a new long-term program aimed at better understanding ocean ecosystems and climate change in the Northeast, thanks to a $6 million grant from the National Science Foundation.

A long-term study which will research the relationship between coastal ecosystems and human interaction with it in the Northeast will be conducted for at least fire years by scientists from Woods Hole Oceanographic Institution (WHOI), University of Massachusetts, and others.

Scientists will expand research on ocean food webs in ecosystems that include recreational and commercial fisheries.

Heidi Sosik and Rob Olson describe how a shared frustration led them to develop a special underwater camera that takes pictures of tiny cells in the ocean. It has revolutionized how the ecology of the ocean is studied