I think that Amundsen may have had a different concept of ‘adventure’. But even when you plan as carefully and completely as possible, things can go wrong. Sometimes it’s small stuff, other times it’s a bigger issue, or it’s out of your personal control. I’m recalling previous cruise when an engine failed on the NBP just as we reached the ice edge in the Ross Sea. Ultimately, we had to return to New Zealand without even starting our science. The highlight was getting to see the ECO crew change out the cam shaft. 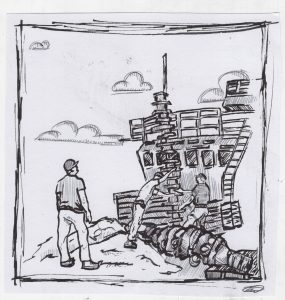 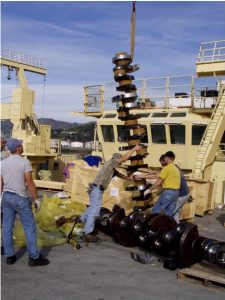 The old shaft is on the dock, while the new one is being lifted by the crane.

There is a lot of planning for these research trips, but I will only talk about the things we are directly involved in. It all starts when we write the grant proposal and submit our fieldwork plans. If the work is funded, about 8 months before the scheduled cruise we submit a Support Information Package (SIP) that describes what support we’ll need to carry out the field research. This includes the instruments we’ll need on the ship, whether we’ll be doing operations with the zodiacs, the chemicals we’ll be using and what waste we’ll be generating, and the cargo we’ll be sending to the ship as well as what we’ll be shipping back (which includes our samples). Then about 6 months before the cruise we’ll start meeting with an Antarctic Support Contractor project manager and the other groups that will be on the ship to sort out the details of the actual ship cruise track, and how to make sure that everyone can get the samples that they need. This all gets put into a final support plan that is used to guide decisions during the cruise. Despite all the planning, we do encounter difficulties/challenges/frustrations that we have to solve so that we can get back to doing ‘science’.

But I’m pretty sure that’s not the ‘adventure’ people are thinking of when I tell them I’m going to Antarctica. Most of my trips have been to the Ross Sea, in the late austral spring or summer. By ‘austral’ I’m referring to the seasons in the Southern hemisphere – summer is in December and January. The sun rarely ever gets below the horizon, so we have (very bright) daylight all the time. Yes, this messes with your normal biological cycles and we use cardboard in our portholes to block the daylight from our rooms so we can get to sleep. It’s remarkable how easy it is to stay awake for 24 hours with access to constant daylight.

One of my favorite Antarctic features occurs during the spring – sundogs. It’s the reflection of light through ice particles in the air. The sun needs to be at the right angle in the sky, and the sky needs to be clear. I’ve only seen them a few times down here, and I did see them one winter morning back at home. 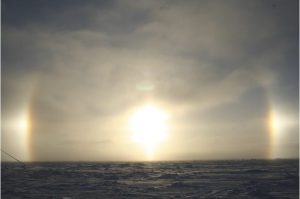 On this trip we are here in late austral fall, going into winter. It’s only daylight for about 5-6 hours each day – the sun doesn’t rise until after 9 (or 10) in the morning and it’s completely dark before 5. So, I’ve finally been able to see both sunrises and sunsets, which makes for some very beautiful colors along the ice and water. The ice is starting to form, which makes one of my other favorite Antarctic features, pancake ice. When they form large aggregations they flow gently with the movement of the water, which can be remarkably calming/hypnotic – or maybe that’s just me. 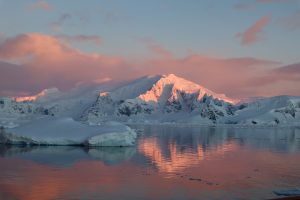 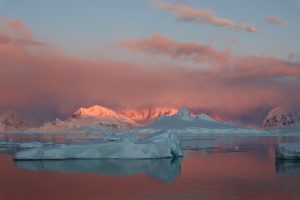 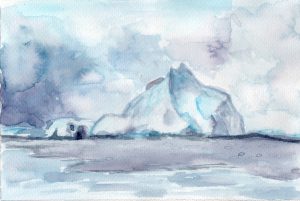 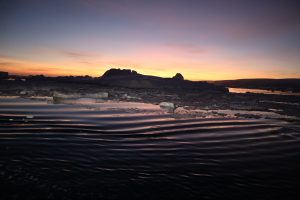 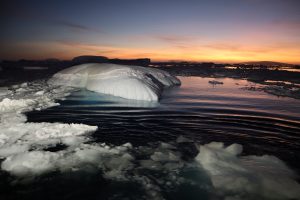 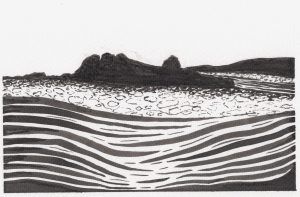 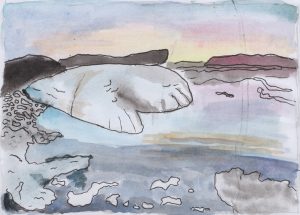 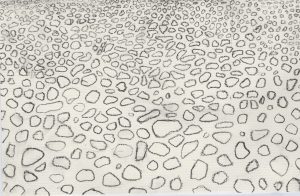 In addition to amazing sampling and research opportunities, I’ve been fortunate to see/experience many things on my trips to Antarctica – I was able to visit both New Zealand and Chile, saw the Cathedral in Christchurch and the Time Ball Station in Lyttleton, NZ (they were both damaged/destroyed in the earthquakes in 2011), I had the pleasure of pre and post cruise drinks in the Irish and the Wunderbar, I’ve seen whales and seals and so much ice, watched massive groups of emperor penguins wander past the ship while working on landfast ice, ridden in the ‘personnel basket’ to access ice floes, visited McMurdo, Palmer and Scott Base (NZ) stations, flew in and out of McMurdo (and rode on “Ivan the Terrabus”), gotten miserably seasick coming out of the pack ice into open water at the end of a long cruise, experienced the back deck and the bow of the NBP covered in seawater during heavy seas (the same time that I was sick….), and met a lot of really great people. 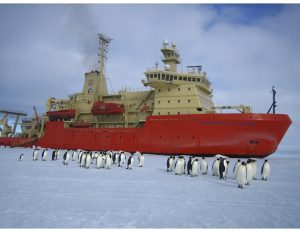 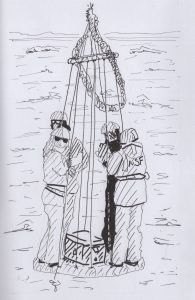