No person who has not spent a period of his life in those ‘stark and sullen solitudes that sentinel the Pole’ will understand fully what trees and flowers, sun-flecked turf and running streams mean to the soul of a man. Ernest Shackleton 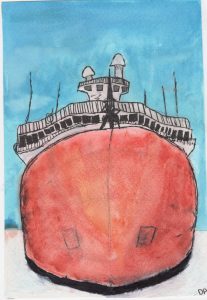 The scenery in Antarctica can be quite beautiful, but it is stark, and on a cloudy/foggy day it could certainly be described as ‘sullen’. We are currently north of Palmer Station, back in the Gerlache Strait, and the weather has dramatically improved. The sun came out (a little), the seas have settled down, and the whales and seals came out to play. We watched a humpback whale (or several different ones) breach repeatedly (about 20 times) as we slowly made our way by (or they made their way by us). The seals have been playing around the ship, almost as if they were trying to get our attention. They were all too far away for my camera to get even a reasonable picture, so I’ll put in one of the seals from my trip on the Gould in 2019. 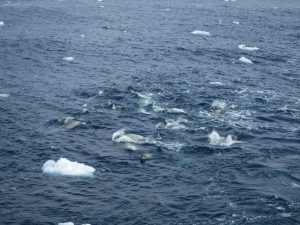 Overall, we’ve not seen many animals on this trip, and especially not penguins. There is certainly a lack of ice floes where we are right now, which could be part of the reason, but we did see plenty of them in the water when we were here around the same time back in 2019. My colleague JayDiii just showed me a picture that he took from the bridge this afternoon of what looks like a penguin colony – although veeerrrrrry far away. We were able to visit a colony one day in 2019 as they all returned from foraging. There were hundreds of them in the water and on land, and we watched as they transformed from powerfully swimming acrobats in the water to noisy, smelly, and rather clumsy creatures on land. 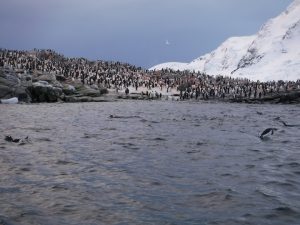 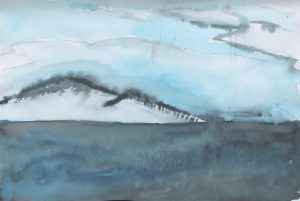 We are starting our last week of science, and that will include at least 4 more sampling stations, and 2 of those are long incubations (4-6 days). So not many days of rest in our near future. After that we will begin the process of taking apart our lab spaces and packing up all of our supplies and the samples we’ve collected for shipment back home. We like to have that all taken care of before we head into the Drake Passage again, just in case the weather turns bad. We stop at Palmer Station for a short while to do some cargo operations and pick up the scientists who will not be overwintering. 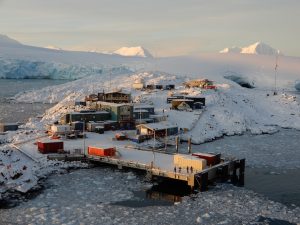 The new dock at Palmer Station. Behind the station is the glacier that we hiked in 2019. This picture was taken by the MPC on our cruise, Karl Newyear.

We’ll be arriving back home to the middle of summer – which will be a definite shock to me. When I left there were no leaves on the trees, but our peach tree and the daffodils had just finished blooming. My crocus came up, but our new yard bunny ate them before they had a chance to fully bloom. It’s ok, I like having a yard bunny, and I’ll continue to plant crocus bulbs just for them to eat. I did fortunately miss the annual pollen deluge on Cape Cod, which makes even non-allergic folks sneeze and wheeze. In addition to the shock of a different season, we’ll also be going through something that we’ve termed ‘re-entry’. It’s a weird feeling of disorientation, and even though you really missed home during the cruise, now that you’re back you feel kind of lost and generally off balance. It’s a mental off balance, but the physical ‘dock-rock’ is another thing we’ll be coping with the first day or two off the boat. 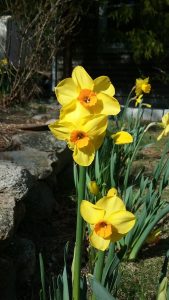 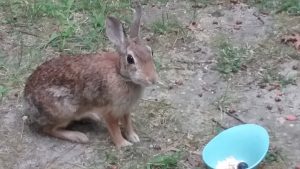 One of our previous yard bunnies – we named him Pretty Boy. He was a very beautiful rabbit, and his favorite treats were sliced almonds and banana chips. He also liked baby spinach, baby kale, and dandelion greens, of course.

It’s one of those ‘stark and sullen’ days in the Gerlache, but none the less pretty. 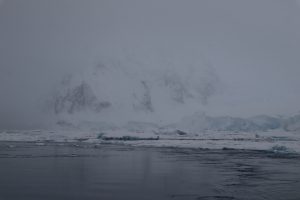 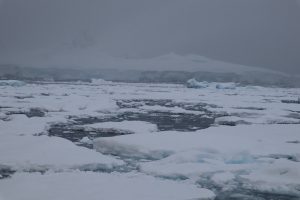